For those of us who consider ourselves socialist feminists, the questions on this March 8th are: Where is the women’s movement today, and what are the urgent tasks for us to take up? 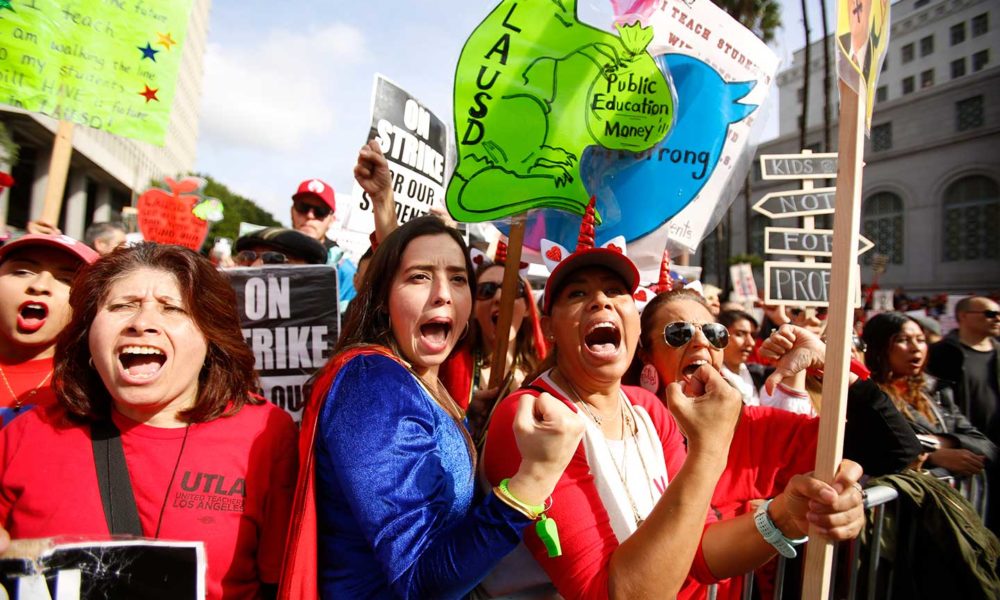 On January 20, 2017, the women’s mobilization wave in Latin America with Ni Una Menos and in countries like Iceland and Poland finally reached the United States. Millions of women marched in the streets of major U.S. cities for the first Women’s March. The first mass resistance against the new president took the shape of women’s mobilizations. It’s not a coincidence that Trump awakened the anger of women — perhaps never in the history of U.S. elections has a presidential candidate displayed such blatant misogyny.

The Women’s March was not the only expression of the international women’s movement in the United States today.  After decades without mobilizations on International Women’s Day, protests were revived in 2017 with calls for an International Women’s Strike. Massive mobilizations took place around the world. In the U.S., a new feminism emerged that argued against “lean-in” representation of women within capitalism, and instead pointed to the patriarchal and racist capitalist system as the enemy of the overwhelming majority of working-class women. For socialist feminists in the United States, the question upon us on March 8th: Where is the women’s movement today, and what are the urgent tasks for us to take up?

The Waterloo of Liberal Feminism

Cinzia Arruzza, Nancy Fraser and Tithi Bhattacharya argue in their book Feminism for the 99%: A Manifesto that Trump’s victory (and the defeat of Hillary Clinton) was the Waterloo moment of lean-in feminism. Nothing symbolized this more than Clinton’s concession speech given at the Javits Center, chosen because Clinton was expected to speak about victoriously breaking the glass ceiling that was literally above her. But this moment never came.

Clinton’s victory would not have been such for the great majority of working-class and oppressed women in the U.S., who are treated as pawns in election strategies. For women of color, trans women, and the working class, as socialist feminists argue, Clinton’s breaking of the glass ceiling would have left them cleaning up the glass.

Clinton’s defeat was not a mortal wound for lean-in feminism. The Women’s March, while expressing the just anger of millions against Trump and his misogyny, takes up the exact same representational lean-in strategy that the Democratic Party has sold to oppressed people for decades. This massive mobilization aligned itself with the Democratic Party machine, serving as a mobilizer for elections more than an independent force against right-wing attacks. The following year, the march’s slogan was “Power to the Polls.” This year, the march paled in comparison to previous ones due to controversy and division between Zionist and anti-Zionist sectors of the women’s movement. This only demonstrates the impossibility of unity between pro-imperialist “feminists” and those who understand that a feminism that does not fight tooth and nail against the U.S. empire is no feminism at all.

Thus, what in 2017 was a massive women’s movement in the streets is today expressed in a passive vote at the polls, exactly as the Democratic Party wanted. However, it would be a mistake to only see the Democratic Party’s current power of co-optation and declare the women’s movement dead. The anger at the patriarchy that brought women to the streets in 2017 and the daily sexual harassment of working-class women that created the #MeToo movement have not been resolved. Rather, they express themselves in two different spheres: on one hand as votes for Democratic women of color in Congress, and on the other hand as a massive strike wave.

Millions of people disgusted by the Trump administration and the Democratic Party establishment sought something different in the midterms. And so we got the most diverse Congress to date with more women than ever before, including a Palestinian American, a hijab-wearing Somali immigrant, a 29-year-old democratic socialist from the Bronx, a bisexual woman from Arizona, and two Native American women.  The masses that took to the streets in the Women’s March have indeed, for better or worse, taken their power to the polls. While the impetus for change at the polls is understandable, there are real limits that are already exposing themselves in this strategy of voting for women Democrats. Just think of the Democratic Party’s disciplining of Ilhan Omar speaking ill of the Zionist lobby!

Yet, it would be false to say that there is no longer protest. Women are still in the streets, and they are leading the revival of the U.S. labor movement.

What began as an uprising in West Virginia in 2018 spread to become a “red state rebellion,” with tens of thousands of teachers walking off the job, breaking no-strike clauses, and defying the union bureaucracy. Only a few months later, there was a wave of hotel worker strikes in different states, who were breaking with years of passivity within the U.S. labor movement. And then came a new teachers’ strike wave, hitting Los Angeles, Denver, and Oakland. Perhaps most promising, West Virginia teachers walked out again, not for bread and butter demands, but against school privatization. They won within 24 hours. Nurses have also gone on strike from Providence, Rhode Island to Burlington, Vermont, and now 97% of nurses in four New York City hospitals have authorized a strike.

It’s no wonder that feminized professions have been at the forefront of the strike wave. Nurses and teachers take up the task of social reproduction, caring for the nation’s working-class children and the sick and elderly. It is precisely these services that have been decimated by austerity measures, which have slashed budgets cuts, and caused further overcrowding in hospitals and classrooms. Austerity measures have forced these working women to take second jobs or extra shifts to make ends meet, leaving less time for unpaid reproductive work, and certainly less time for leisure. In this sense, it is no surprise that these sectors, doubly squeezed by austerity, are at the forefront of the strike wave.

The Problem of Representation

Striking teachers aren’t primarily framing their work as a women’s movement.  Rather, what most people in the US think of as the women’s movement is in the halls of Congress wearing white at the State of the Union.

On one hand, teachers are fighting for the first time in years for higher wages and better conditions for students. They’re beginning to show the potential of working-class women to respond and fight for the rights of all working-class and oppressed people in society, by taking up the fight for smaller class sizes for Black and Brown children, for immigration services in schools, and for higher budgets for education. And yet, Congress continues to be seen as the political representation of these struggles and the movement.

The working class as it is — especially Black, Brown, migrant, and LGBTQ people — will first benefit from a struggle against capitalist exploitation, as they are the most exploited. This same working class, in all our diversity, stands to gain the most from the fight against oppression. What unifies us is the hardships generated by the capitalist system, which is patriarchal, racist, and xenophobic. The first task for socialist feminists is to connect those dots.

This means not only fighting the bosses on the picket line but also fighting against the bosses’ parties. It means showing that capitalism is the enemy of the working class and oppressed and that we cannot fight for women’s rights by voting for a capitalist party. The working class and oppressed need an uncompromising political representation of our struggles that refuses to yield space to the Democratic Party.

It’s not enough to fight for the unity of sectors resisting capitalism and oppression. The unity of all oppressed and working-class people in resistance is necessary, but as we have already seen, the Democrats have an immense power of co-optation.

This is not about being anti-electoral. If we are serious about fighting capitalism, we cannot exempt ourselves from the fight for a socialist political representation of our struggle and resistance against capital. This is about unifying the struggles of oppressed and working people, which capitalism tries so hard to divide.

An independent, socialist electoral campaign could use the attention and politicization of the electoral moment to show that our struggles are linked and that we have a common enemy. It could provide a widespread political articulation of the socialist feminist struggle. This is not about taking the movement out of the streets, but about strengthening our resistance with a clear anti-capitalist framework. That is why such a campaign must be independent from the Democrats. The Democratic Party will never provide political representation of the working-class struggle against the bosses, of migrant women and their children who are being sexually assaulted in detention centers, or of Palestinians suffering the brutality of Israel. The Democratic Party cannot and will not be the political representation of the world we fight for: a world without bosses, without cops, without borders.