“Squid Game” Is an Allegory for Capitalist Society

In the hit Korean show “Squid Game,” working-class contestants are given a gruesome chance to win millions, or die trying. An allegory for capitalism, the show’s “game” can only exist because of the structural poverty produced under our exploitative system. 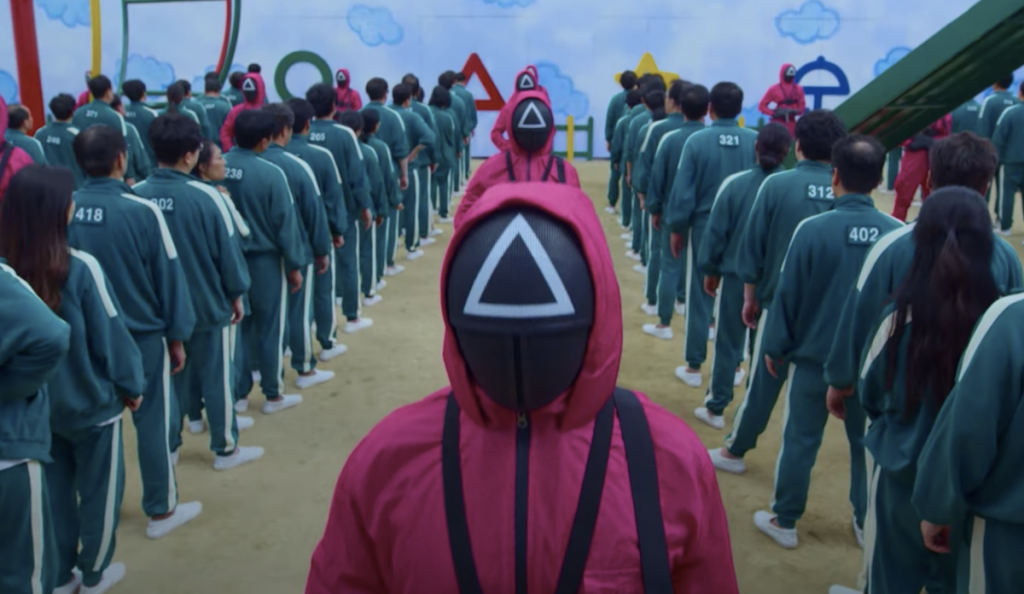 The series Squid Games has been trending on Netflix, reaching the #1 spot. This hit Korean drama tells the story of a group of 456 people who are called to participate in a “game.” After being drugged and taken to a remote location, the participants compete to win a prize of 45.6 billion won ($39 million).

Directed by Hwang Dong-hyuk, the show is in the survival drama genre, akin to works like Alice in Borderland (2020), John and the Hole (2020), Circle (2015), and, most paradigmatically, Battle Royale (2000), where a group of people participate in deadly games in order to survive.

Works in this genre typically follow the premise that if human beings are put in extreme situations, then their true nature will show. However, it seems that the opposite is true: the extreme situations in these survival dramas prevent their participants from actualizing their most human powers — solidarity, tenderness, and empathy. In fact, rather than telling us about what it is to be human, they show us the dehumanization that these death systems are capable of.

We should consider in what ways the series speaks to the dehumanizing capacity of our society or, put differently, in what sense we are all playing versions of Squid Game.

The series centers on Seong Gi-hun, a 47-year-old man who is completely broke. He lives with his mother from whom he steals money to satisfy his compulsive racehorse gambling. His life is consumed by unpayable debt that leads him to sign up to sell his organs to the Korean mafia.

However, his situation is not uncommon in Korea. As noted in the show’s final episode, Korea has the world’s second highest level of household debt, which is rapidly increasing. The participants in the Squid Games are not unique and unlikely, but victims of structural violence. Another famous Korean drama, Parasite, showcases these vast class differences. The “players” in Squid Game can only exist because of capitalism and the structural poverty it produces.

The Illusion of Choice

An unknown and insidious organization chooses the participants who will “play” the Squid Game. The selection process consists of a detailed investigation and surveillance of Koreans living in extreme poverty. While everyone chosen is given a choice to play the games, this is in reality not a choice because of the coercive forces of capitalism not giving them any path to move forward in life. They were selected because they have been socially stripped of everything and can therefore serve as disposable human “race horses.”

A simplistic reading of the show would be that extreme precariousness pushes participants to risk their lives in pursuit of change. However, a more critical analysis must acknowledge that this “decision” should not be approached from an individualistic perspective.

The Squid Game’s organizers carefully selected those whose dire life situations and the possibility of dying in a game do not differ much from each other. The high percentage of people who “chose” to redo the game — the reentry rate is 93 percent, as we learn in the second episode — accounts for this impossible “decision”: after being stripped of options in their life, participating seems the best option.

If, as Hwang Dong-hyuk notes, Squid Game is an allegory for capitalism, then we should reflect on the analogy between our society and the game’s longevity, and its effectiveness in recruiting participants. That is, how is it possible that 14,592 people have participated throughout the game’s 32-year history, and that a winner has been crowned each year? In other words, why have people always “chosen” to continue playing? And, more importantly, what is the analogy between the Squid Game and capitalist society?

We have already mentioned the thorough process through which members of the lowest class and fallen members of the middle class are chosen to participate, and the ways in which the capitalist system robs us of opportunities. However, between these processes and the radical objectification of considering the participants as “horses on the track” (episode 9), there are several alienating and dehumanizing processes at play.

The recruitment process, carried out through a Korean game called ddakji, consists essentially of alienating yourself from your pain and your body. If you can accomplish this in exchange for money, it will be assumed that “you can use your body to pay up” (episode 1). This proceeds to a defense of kidnapping and confinement through discrediting and holding the participants responsible for “participating in this game of their own free will.”

All of you in this room are living on the edge, with debts you can’t pay off. When we first went to see each of you, not a single one of you trusted us. But as you all know, we played a game, and as we promised, gave you money when you won. And suddenly, everyone here trusted us. You called and volunteered to participate in this game of your own free will … Will you go back to living your old and depressing lives getting chased by your creditors? Or will you act and seize this last opportunity we’re offering here? (Episode 1)

In the first game, Red Light, Green Light, participants are shot if they move when the animatronic robot of a small girl looks at them. This begins the process of alienation to the deaths of others. Only those who do not flinch at the shooting and the death of the participants, and who accept that there is no choice but to play, will be able to win. In episode 4, Between the second and third game, the organization provokes a fight by purposefully giving the participants less food. This leads to distrust and further dehumanization among the participants as they see each other as latent dangers.

In the third game, Tug of War, the participants have to take their alienation from the other players to its ultimate consequences. They must pull on a rope to throw opponents into the void — kill or be killed. In the fourth game, the participants have to compete to the death in a game of marbles against the person they entrusted to join their team. Any remaining ounce of empathy or solidarity would have to be discarded in order to survive.

Finally, in the game that gives the series its name, the other participant must be completely dehumanized. In this game, where “any kind of violence” is allowed, the alienation of the other is taken to the extreme. It is no longer a murder mediated by an instrument (as in the Rope Game), but one has to murder by one’s own hand, directly. Of course, the main character resorts to “evading” some of these processes of alienation, but his case is unusual and only made possible by his solidarity and personal relationship he was able to build with Oh Il-nam. Unbeknownst to him, Player 001 was the manufacturer of the whole operation and a key alliance with a powerful and rich player saved his life multiple times.

Squid Game shows the sickening conclusion that the enormous division between classes that South Korean society has produced. This game was created to combat the boredom of obscenely wealthy people, called VIPs in the show. In other words, a system of death is financed for the sake of mere entertainment.

The participants’ objectification and dehumanization is obscenely direct. As the leader of the organization mentions in episode 9, “You like horse racing, don’t you? You are horses, horses on the track.” The squid game expresses, in a radical fiction, the vast difference between classes produced by capitalist society. The competition that the participants go through is an allegory for the cruel competition experienced by the dispossessed people of the world.

Even without knowing it, all of us are living in the Squid Game.

Originally published in Spanish on September 30 in La Izquierda Diario.