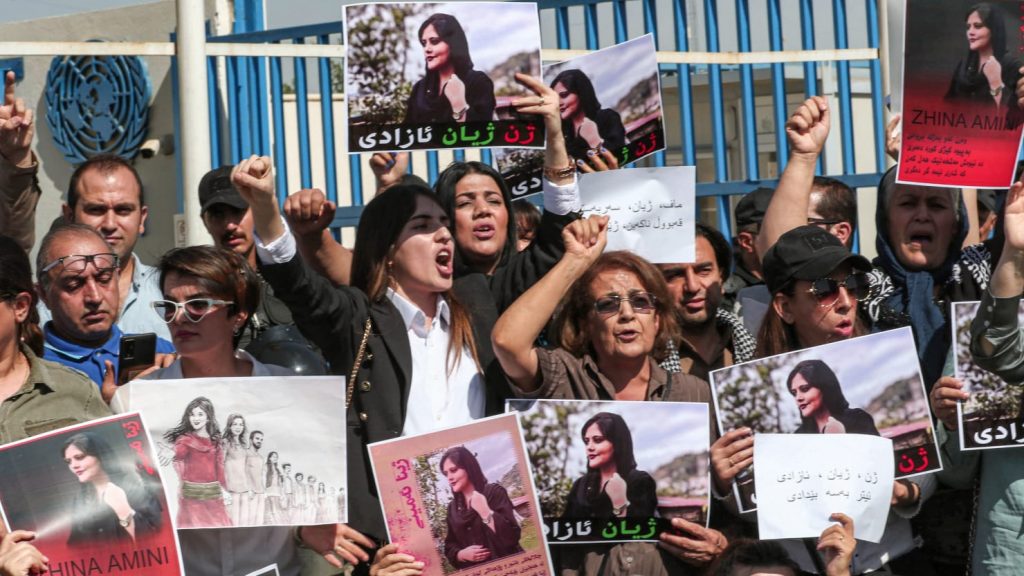 The world is witnessing a historic struggle in Iran. Feminists and workers are fighting for “Women, Life, and Freedom” following the state’s murder of Mahsa Zina Amini, a Kurdish woman who was beaten and died in police custody after being accused of improperly wearing her hijab. This is a mass movement against attacks on women and the working class, and against police violence towards an oppressed community. It is no wonder feminists around the world are inspired.

Many people are wondering what they can do to support the protests in Iran. In the United States especially, it is important that solidarity includes a strong opposition to imperialism — most notably, to U.S. sanctions. In fact, the United States is already using this moment to impose more sanctions on Iran.

These new measures have been placed on Iran’s “morality police” who killed Mahsa Amini and  are ruthlessly attacking protesters. This institution certainly deserves no sympathy from the Left. However, the nature of sanctions means that even when this economic warfare is supposedly placed on just one institution, it disproportionately hurts workers, women, and oppressed communities like Kurdish people.

As U.S. hegemony declines and direct warfare remains unpopular among the country’s working class, U.S. imperialism is increasingly using economic warfare to impose its will around the world. The use of sanctions proliferated greatly under Trump, and Iran was one of that administration’s main targets of economic warfare. Trump’s “maximum pressure sanctions” greatly limited Iran’s access to medication for cancer treatments and epilepsy patients. At the height of the Covid pandemic, Trump actually increased sanctions on Iran, contributing to the country’s massive death toll.

Now with the world watching Iran, and feminists in the United States eager to show solidarity, it is important for the Left to highlight the harm sanctions place on Iranian women, without giving any support to the regime that Iranians are protesting. It is notable that Iranians themselves are not calling for sanctions, and some are even pointing out that the legacy of U.S. intervention is also to blame for the oppression of women in Iran.

As Left Voice covered in March in regards to U.S. sanctions on Russia, sanctions are a tool of imperialism which has its own interests, in contrast to the interests of oppressed and working-class people in subjugated countries. We as the working class have our own methods to fight for liberation, such as shutting down the streets and using our workplaces to halt production.

As U.S. imperialism cynically uses talk of women’s rights to justify intervention, the Far Right in the United States is advancing attacks on the autonomy of women and LGBTQ+ people. Meanwhile, Biden is expanding the police state which uses violence to suppress leftist movements like the Black Lives Matter protests and recent actions for abortion rights.

As noted above, the protests in Iran are highlighting “Women, Life, and Freedom.” Time and again, the U.S. regime has shown that like the Iranian regime, it opposes women, life, and freedom. As the feminist movement in the United States shows its support for the feminist movement in Iran, we can support women, life, and freedom by refusing to tolerate U.S. sanctions on our class siblings and by uniting our struggles here and around the world.