SYRIZA: The referendum was a joke 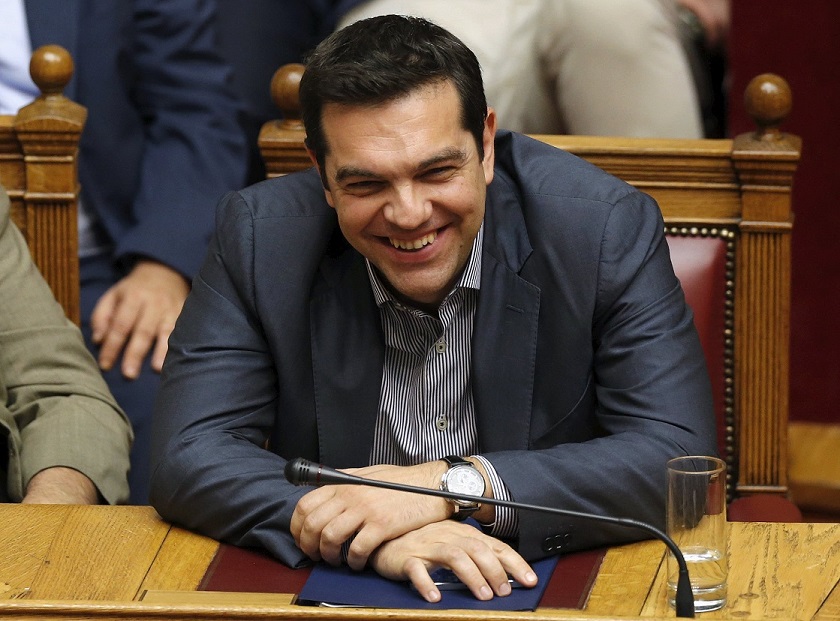 The ominous situation faced by Greeks, thanks to services rendered by EU leaders and financial institutions, has inspired sympathy from left organizations and people around the world . The reactionary campaign for the “yes” vote prior to the referendum, undertaken by top Euro officials and European presidents, has inadvertently galvanized a broad majority against the Troika and its austerity measures. The result of the referendum was a resounding “NO,” an outcry of the youth and working class against EU-mandated neoliberalism.

Still, SYRIZA’s government has managed to come up with a new proposal to ingratiate itself with the creditors. The new offer is a set of concessions –remarkably similar to the one rejected on Sunday– committed by Tsipras’ government, to be paid for by the sweat and blood of the Greek people. The document was crafted by technocrats provided by the French government at the request of the new finance minister, Euclid Tsakalotos.

Among many compromises, the proposal includes a reform to the VAT (expected to raise the GDP by one percent), a meager two percent increase on corporate taxes (instead of three, as first advanced by the Greeks), an increase in the retirement age, and the privatization of public assets including electricity services, regional airports, and major seaports like Piraeus and Thessaloniki.

All these measures would guarantee a primary surplus in the budget, a priority required by the Troika and obediently respected by Tsipras’ government. At an emergency summit this Sunday, Eurozone leaders will decide whether they will accept the offer and release a bailout worth over €53 bn over a period of three years. This will be a turning point.

But let’s recap the events leading to this moment. People went to the ballot boxes en masse last Sunday and expressed the will to refuse Juncker’s austerity plan. In truth, Alexis Tsipras and his band claimed from the beginning that their aim was to obtain a “no” vote in order to return to negotiations and bargain on better terms, but keeping the concession made over the last five months.

It was already a bad sign when, immediately after the “no” vote, Tsipras called for a meeting in which almost all political parties along the spectrum took part (Golden Dawn was not summoned). Few Greeks expected such blatant capitulation in such a short time.

On the situation in Greece, the New York Times writes: “Prime Minister Alexis Tsipras began the apparently delicate task on Friday of selling his anti­-austerity party and the rest of the Greek Parliament on a three­ year rescue package that was remarkably similar to the one Greek voters overwhelmingly rejected.” The Guardian kept it simple: “The Greek government capitulated on Thursday to demands from its creditors.”

The “no” vote swept working-class neighborhoods and youth , oscillating between 70 and 80 percent. In contrast, the “yes” vote swelled from the upper-class and wealthier areas of Athens. It was certainly not the workers’ mandate to commit to an austerity policy that would deepen the economic and social bankruptcy and unload the weight of the crises on the shoulders of workers, youth, and the poor.

Cracks in the ruling party

The bailout deal was backed by Greek Parliament on Friday, but a total of ten MPs from the ruling coalition did not support Tsipras’ proposal. Among the important abstentions were Costas Lapavitsas and Panagiotis Lafazanis (Greece’s energy minister), both members of Syriza’s Left Platform. The President of the Greek Parliament, Zoe Konstantopoulo, also abstained.

This is the highest price the leadership of SYRIZA has paid since its birth, but the potential for a real split has been precluded so far by Left Platform members’ unwillingness to assert an alternative position. Unfortunately, this left-leaning caucus has responded with lukewarm critiques to a number of intolerable government measures, such as the formation of a governing coalition with the nationalist, conservative ANEL–bequeathing them nothing less than the Defense Ministry!–and committing to the Troika’s austerity program, as they did once before, although only “temporarily” to buy time. Despite their critiques of the reformist leadership of SYRIZA, the Left Platform has merely acted as the government’s left pillar” , legitimizing a conciliatory path that can only bring more oppression and defeat to the Greek people.

The harsh, reactionary campaign around the referendum left one positive outcome: people regained the streets to protest against austerity. Massive marches took place last week and reignited the fervor of the Greek people. The Troika’s decision on Sunday will be a turning point, determining the situation for Greece in the coming months and even years. While the Greek Parliament bends to the will of Eurozone creditors and capitulates to austerity measures, the latest events suggest that a rise in popular unrest can be expected.