Tenants’ unions across Brooklyn banded together for three days to fight for the cancellation of rent and an eviction moratorium. In a small win, New York City has postponed legal eviction until September. The power of the people and direct action, yet again, has succeeded in pushing back against the landlord class. 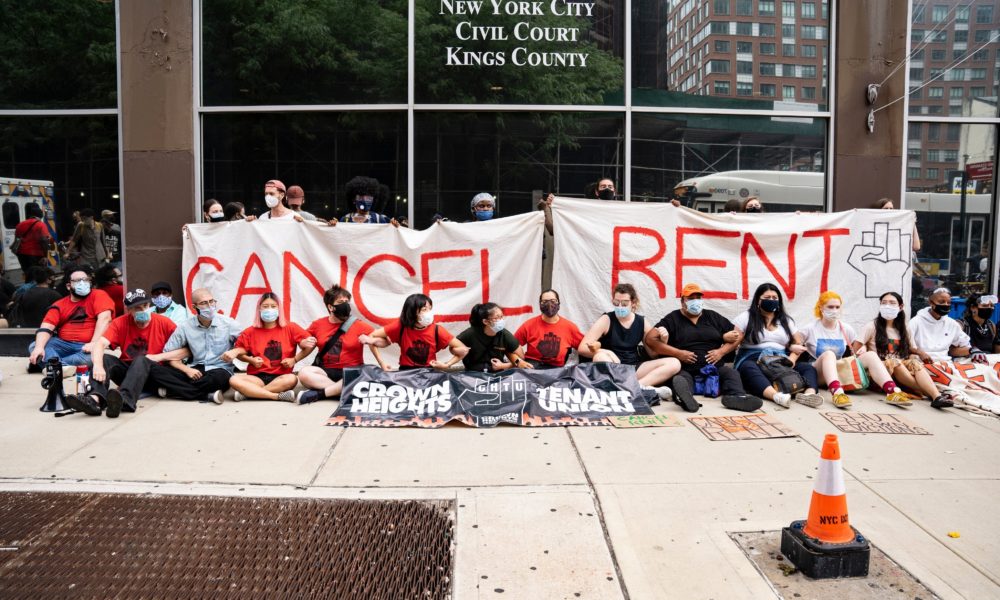 August 4 began a three day action planned by tenants unions across Brooklyn. The three day rally, called “Shutdown Evictions and Cancel Rent,” was powered by the Crown Heights Tenant Union, Flatbush Tenant Coalition, and many more neighborhood and property management-specific unions and organizations. Hundreds gathered at 8:30 am in front of the Brooklyn Housing Court to fight against corrupt landlords and the state government’s indifference towards tenants and the working class at large. By the third day, the eviction moratorium was pushed back — this time until September 4. This gives tenants another month to organize, broaden their base, and sharpen their tactical approach to defend against the eminent national housing crisis.

On Tuesday, the first day of the action, hundreds braved it outside during a tropical storm to chant in front of the Brooklyn Housing Court. In a now monthly occurrence, tenants took to the megaphone near the court’s doors and told the crowd about the injustices of a system that allows basic human needs to be commodified. During a pandemic, in a city that has nearly two-thirds of its residents renting homes, there have been no protections put in place except a brief eviction moratorium. After speaking against cruel landlords, especially the corporate landlords that have allowed for rapid gentrification and displacement of Black and Brown communities, the crowd began to march. Many circled in front of Brooklyn’s Family Court, protesting its culpability in displacing working class families.

What do we want? Cancel rent
When do we want it? now!
At Brooklyn housing court pic.twitter.com/K0qf2IYKdz

On Wednesday, bright and early, more members of the community stepped out to fight against the eviction moratorium’s expiration, scheduled for the following day. After everyone gathered in front of Housing Court, the crowd moved onto the offices of Slochowsky & Slochowsky, a law firm that represents some of the biggest slumlords in the city. The law firm was able to take in $350,000 in PPP loans during the crisis, turning around and using that money to file evictions against tenants who weren’t so lucky.

Hey Slochowsky & Slochowsky LLP, thought you could get away with evicting tenants during a pandemic? Think again. Tenants are coming for you. #CancelRent #EvictionFreeNYC pic.twitter.com/odLNp3yzvs

By Thursday, the tenants had another small victory under their belt. Cuomo signed an executive order the night before pushing back the eviction moratorium another month. The crowd gathered, yet again, outside of Housing Court , before marching to the ConEd offices on Flatbush Ave. In the wake of a massive rate increase to electricity utility bills, Tuesday’s storm left hundreds without power. The increase didn’t go into investing in a safer and more effective power grid, but instead into shareholders’ pockets. The demand to put ConEd under public domain was chanted by the hundreds of attendees, noting that “Utility rights are Tenant’s Rights.”

Afterwards, the tenant unions directed the marchers to another corrupt law firm that has been using its time and money to throw predominantly Black and Brown families out on the streets while the pandemic rages on.

The final move was back to housing court. While there, Joel Feingold, a Crown Heights Tenant Union representative, led everyone in a sit-down in front of the doors of the housing court. Many in the crowd sat side by side, arms linked, singing “We Shall Not Be Moved.” While evictions have been postponed, this small victory will only allow tenants more practice in the radical tactics seen in housing courts such as in New Orleans. Tenants must be prepared to fight for the rights of all tenants in the city, putting their bodies on the first line of defense in housing courts and in front of the homes themselves.

Cancel rent! The third day of action to cancel rent and shut down evictions. pic.twitter.com/Y0PoClD96P

Tenants celebrated this postponement as a victory, but also as a call to action. The eviction crisis is imminent and massive, with 23 million people facing housing insecurity nationally. Forcing millions onto the streets during a massive spike in Covid-19 cases, right before a second wave is expected to hit New Yorkers this fall, would be a public health disaster. Cuomo has stated there will be “No evictions in middle of coronavirus pandemic.” However, there is no end in sight to this pandemic until a vaccine is available. Pushing back the moratorium month by month is an unsustainable strategy by our government, only causing more confusion for renters already facing an unstable time. Until real protective measures for tenants are put in place, this eviction moratorium is just a temporary political salve for the Cuomo administration.