Tens of thousands of rank and file workers participated in the Strike for Black lives on July 20. The nationwide action marked an advance in the labor movement’s participation in the nationwide uprising against the current crisis and systemic racism, but it also showed the clear limitations of union leaderships’ collaboration with politicians and their unwillingness to tap into the true power of the working class. 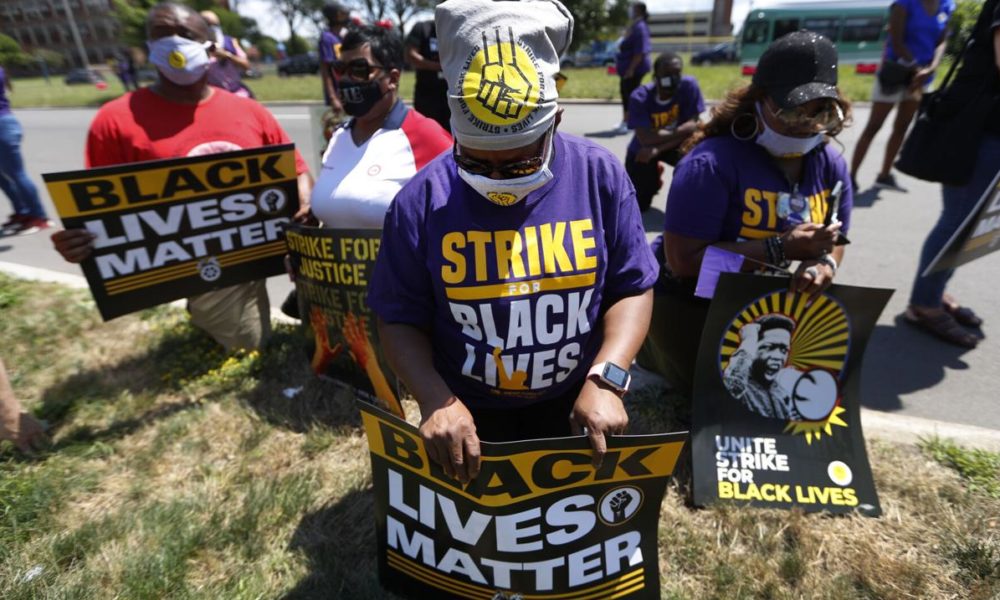 On Monday, July 20, tens of thousands of workers in 200 cities across the United States participated in work stoppages and demonstrations as part of the “Strike for Black Lives.” The mobilizations were organized by 60 different unions and organizations, including the SEIU, the American Federation of Teachers, the Movement for Black Lives, and the U.S. Youth Climate Strike Coalition. The actions ranged from short work stoppages to walk outs and rallies throughout the day. Workers across various sectors, from janitors and nurses to farm workers and food service workers took up the call to action, highlighting poor working conditions and historic inequities faced by Black and Brown workers, particularly those workers who have been forced to work low-wage, precarious jobs both before and throughout the pandemic and those who are facing the reopening of the economy without proper protections and compensation.

In light of the uprising across the country against racism and police terror, the actions taken up by rank and file workers in unions were a rousing show of solidarity and of the vital need for the labor movement to link up with the declining and increasingly repressed movement in the streets; it was a marked advancement in the participation of the labor movement, which so far has mostly limited its participation to statements of solidarity. However, led and organized by union leaderships and non-profits with little intention of challenging these injustices beyond lobbying for a few legislative changes and garnering a little extra media attention, this day of action was but a whisper of the full power the working class has to mobilize in defense of Black lives against racism and capitalist exploitation.

In California, unions staged large protests throughout Los Angeles, San Francisco, and Oakland. A caravan of hundreds of cars made its way through the streets of south Los Angeles, with signs in English and Spanish bearing slogans such as “Black Lives Matter” and even “Abolish USC Police.” The caravan stopped in front of a McDonald’s and blocked traffic for 8 minutes and 46 seconds, the time that killer cop Derek Chauvin had his knee on George Floyd’s neck as he murdered him.

Many of the actions around the country, including the one in Los Angeles and those in Chicago and other major cities, targeted fast food giant McDonald’s, which has a long history of racial discrimination and which has more recently been accused of refusing to provide adequate protective equipment to employees during the pandemic. As Angely Rodriguez Lambert, a McDonald’s worker in Oakland, told NPR: “We’re going on strike because McDonald’s and other fast-food companies have failed to protect us in a pandemic that has ravaged Black and brown communities across the country…We’re going to keep joining together and speaking out until McDonald’s and other companies respond with actions that show they really value our lives.”

Fast food workers, sanitation workers, and nursing home workers in Detroit also walked off the job to demand higher wages and better working conditions. The work stoppages were primarily organized around the SEIU’s campaign for a $15 minimum wage, a call which has gained new significance in the context of the pandemic and economic crisis. Forced to put themselves at risk for capitalist profit, essential workers are demanding adequate protections and increased pay, as well as the right to organize for their interests in unions.

But the nationwide day of action extended beyond major cities into rural areas where thousands of workers, many of them people of color and undocumented immigrants, work as low-wage and precarious farm workers. Vineyard workers in Washington state’s Yakima Valley stopped work for 9 minutes in solidarity with the Black Lives Matter movement and in recognition of the shared exploitation that workers face under capitalism. Workers participating in the work stoppage held signs like “Campesinos en apoyo de Black Lives Matter!” (“Farmers in support of Black Lives Matter!”) and “Nadie es libre hasta que todos somos libres!” (None of us is free until all of us are free!”). In a statement announcing the work stoppage and endorsement of the Strike for Black Lives, the United Farm Workers union drew on the legacies of Cesar Chavez and Martin Luther King Jr., extending solidarity to the protests in the streets against police brutality: “This movement reaches from the streets of our cities to the fields and orchards that feed this country.”

In New York, despite the intense heat, various unions organized actions across the city, drawing rank and file nurses, doormen, drivers, rideshare workers, and construction workers into the streets. One demonstration gathered in front of Trump Tower, where marchers were joined by Democratic Senator Chuck Schumer who used this widely publicized opportunity to lobby for the passage of the HEROES Act in congress, a $3 trillion stimulus package that provides ample protections for the same huge corporations that participants in the Strike for Black Lives targeted but does little to protect the lives of workers suffering the effects of the pandemic and economic crisis.

Herein lies the contradiction of the Strike for Black Lives. The march drew diverse sectors of the working class into the streets and explicitly tied the state terror faced by Black people to the exploitation of Black and Brown and precarious workers in the workplace. However, because it was organized by union leaderships and social justice organizations that are beholden to the Democratic Party and unwilling to meaningfully challenge a system that engenders workers’ oppression, the nationwide action aimed to achieve little more than visibility for various legislative proposals aimed at “reimagin[ing] our economy and democracy” and putting public pressure on corporations to make minor changes in policies and conditions.

Simply put, the working class cannot ally with its enemies if we hope to achieve our demands. Any attempt at justice for Black Lives cannot go through the Democratic Party, which in one breath says “Black Lives Matter” and with the next passes austerity legislation and corporate bailouts that disproportionately hurt Black and Brown workers.

The Democratic Party is no friend to workers or the Black Lives Matter movement, but neither are union leaderships that refuse to organize real strikes around demands that could actually achieve better conditions and positions for the working class, such as kicking cops out of unions or demanding an end to layoffs in the face of a deepening economic crisis. And if unions wanted to show their solidarity with the Black Lives Matter movement, beyond symbolic work stoppages, they would use their ability to strike to protest the incredible acts of repression being inflicted on protesters in Portland and other cities at the hands of Donald Trump and Democratic mayors and governors.

In the Strike for Black Lives, we can see the potential for a real movement of workers to fight against racism, state terror, and economic oppression. In the tens of thousands of workers who took part, not only in Monday’s actions, but in the wave of protests over the last two months, we can see the will of the working class to struggle against oppressors who would kill them for buying groceries and send them to die in the middle of a pandemic to make a profit. But in order to tap into this deep well of rage and power, rank and file workers must resist the pacifying attempts of their union leaderships and organize real, sustained strikes around radical demands and across vast sectors of organized and unorganized workers. With this type of action, the working class could do far more in defense of Black lives than symbolic gestures. As doctor and SEIU member Mike Pappas wrote recently:

If we slog through organizing in our workplaces and communities, we could stop the system, put millions on the streets in protest, and, most importantly, show the power of workers against racism. And this organizing will take more than setting a date and calling the press. It will, in generalities, require the slow work of building committees, calling assemblies in workplaces, coordinating across industries, and countless other ways of creating the structures necessary for a strike. And though it will be hard work, support of such an action could be massive.