The Best Plan For 4/20: Worker-Controlled Weed

Cannabis criminalization is part of a larger history of imperialism. An alternative this 4/20? Worker-controlled weed. 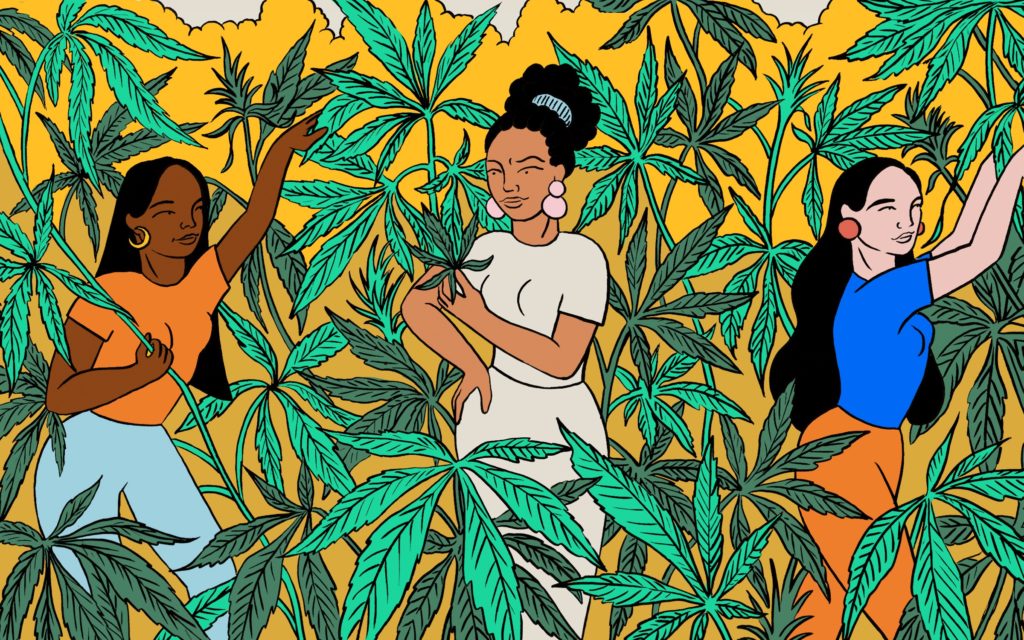 Planning to celebrate this 4/20? If you are, and you live in California, Colorado, or one of the nine other U.S. states that have legalized recreational marijuana, there’s a good chance you bought your stash at a brick-and-mortar store. With other states, like New York and New Jersey, slated to legalize marijuana in the next few years, this year’s celebration comes in the midst of a serious sea change in how the United States gets stoned.

As a marker of how quickly the cannabis industry has been normalized, some cannabis shops have even been deemed “essential” during coronavirus shutdowns. (Though it’s smart to focus this year’s cannabis consumption on edibles or other non-smokable forms, as smoking anything can increase your vulnerability to serious effects of COVID-19.)

But as the U.S. heads into an election year in which even the Democratic party, long at the forefront of the War on Drugs, has adopted a pro-legalization stance, it’s important to ask: Is legalized weed enough? How far has legalization gone to undo the decades of devastation the War on Drugs wrought on working class Black and Latinx communities? Should there be a socialist goal beyond representation of marginalized folks within a capitalist cannabis industry?

To address these questions, let’s first take a walk through cannabis history, to understand how the drug came to be racialized, and criminalized, in the United States and globally.

The Global History of Getting Stoned

In 1937, Henry Anslinger, president of the new U.S. Federal Bureau of Narcotics, testified before the U.S. Congress about the dangers of a scandalous new drug: marijuana. Anslinger spun an alarming story of a drug so potent it could cause madness, inspire rape and murder, and — worst of all — help oppressed people have fun. Even more dangerous than the drug itself, according to Anslinger, were the people who used it: jazz musicians, Mexican immigrants, and communists.

There was only one problem with Anslinger’s thesis: marijuana use wasn’t new at all. In fact, humans have been using cannabis to get high almost as long as we’ve been living in cities. In China, oral histories referring to cannabis’s intoxicating power date back to at least 2700 BC. Ancient South Asian medicinal and spiritual texts dubbed cannabis one of five major sacred plants. Medieval Arabic literature includes a symbolic debate between the virtues and vices of alcohol and hashish, and marijuana use has long been associated with Sufi mystics. Cannabis had complex and sometimes contradictory meanings in each of these contexts, and local governments enacted different levels of cannabis regulation.

By the time European colonialism brought cannabis to the Americas, its use was already ancient history. But for Anslinger, testifying before Congress in the 1930s, these histories — and the fact that scientists had repeatedly found the drug relatively harmless — didn’t matter. That’s because anxieties about cannabis had little to do with the drug itself, and everything to do with the control of land and labor that characterized U.S. and European imperialism.

The Imperialist Path of Marijuana Criminalization

Widespread Western criminalization of cannabis began, as did many of the world’s worst trends, with British Empire. While there is evidence of cannabis use in Europe, the drug was relatively unknown in England in the early modern period. Hemp in general, however, had long been an object of European cultivation and trade for its use as a fiber.

When the British arrived in South Asia in the 1600s, they found a rich medicinal cannabis culture, including antecedents to the bhaang drinks and sweets popular in South Asia today. Colonial scientists studied cannabis preparations for their potential use in Western medicine and their benefit as a cash crop, part of Britain’s overall exploitation of the botanical and scientific resources of its colonies.

In the late 1800s, partly in response to simmering anti-colonial sentiment, the British launched several high-profile investigations into the relationship between ganja and colonial insubordination. Vivid accounts of violently intoxicated, rabidly anti-British Indian subjects swept colonial tabloids, prompting fear and repression from authorities. “Murderous assaults by individuals under the influence of Indian hemp have been somewhat frequent,” one 1885 Bombay newspaper opined. The association between madness, cannabis, and control was so stark, officers at colonial “insane asylums” actually looked for calluses on incarcerated people’s fingers — supposed markers of frequent ganja smoking.

Meanwhile, in the United States, a similar politics of land, labor, race, and cannabis was beginning to play out. In the 1800s, cotton growers urged the U.S. government to criminalize cannabis, because they feared possible competition from hemp-based textiles. This push from white cotton barons, and the association of marijuana with colonized people, likely helped fuel early twentieth century racist anxieties about Black Americans’ — particularly jazz and other cultural creators’ — use of the drug.

The first U.S. locality to ban the drug was El Paso in 1914 — partly, some historians argue, because of its association with Mexican immigrant communities. This would have been tied to the region’s perennially shifting borders and populations, the result of aggressive U.S. imperial expansion. Piecemeal regional attempts to regulate weed cohered into the passage of Anslinger’s 1937 Marijuana Tax Act, which effectively criminalized cannabis.

In the ensuing decades, the United States exported criminalization, in continuation of the British imperial practice of cannabis control. The WHO’s 1961 Single Convention on Narcotic Drugs included cannabis on a list of illicit substances, effectively continuing the export of Western preoccupations with marijuana into contexts where medicinal, spiritual, and culinary cannabis use had historically been widespread. Some countries, such as India, pushed back on the unilateral criminalization of cannabis, and maintained laws that recognized forms of traditional use.

Today, marijuana and other substance criminalization is a key part of the semi-colonial economic and political relationship between the United States and much of Latin America. While Reefer Madness-style slasher films depicting crazed, murderous pot-smokers have mostly disappeared, pop culture representations of marijuana remain racialized and classed. In television, the movement of drugs across the U.S.-Mexico border is often used as a symbol of the fictitious “threat” working class Latin American migrants supposedly pose to white Americans — for example, in the suburban-mom narco drama Weeds.

The Ambivalent Effects of Legalization

Due to decades of criminalization and centuries of structural racism, Black Americans are almost four times more likely than whites to be arrested for cannabis use, even though the groups use marijuana at similar rates. This remains a major driver of racist mass incarceration and the U.S.’s status as the most carceral state in the world.

In contrast to past mass panics about marijuana use, however, today two-thirds of U.S. residents support marijuana legalization. Even former generals of the War on Drugs are now touting legalization. This year’s Democratic presidential contenders featured heavy support for some kind of legalization, including, for example, from Kamala Harris, who has been widely criticized for her role as a prosecutor. Even Joe Biden — historically, a huge fan of racist mass incarceration and an all-around shitty guy — thinks pot should be “basically” legalized.

But what concrete effect has legalization had on the Black and Latinx, working-class communities that the War on Drugs most deeply harmed?

It’s true that decriminalization has coincided with a decrease in the overall percentage of marijuana-related drug arrests. In 2010, 52% of all drug arrests were for pot; in 2018, that number was 40%. At the same time, a whopping 92% of these arrests remain for marijuana possession, meaning people — mostly working-class, Black, and Latinx folks — are being arrested, fined, jailed, and caught in cycles of criminalization for owning a substance that is perfectly legal in 11 U.S. states. At the same time, in Colorado, legalization has actually resulted in increased arrests of Black and Latinx teens for marijuana possession.

Meanwhile, legalization has meant privatization, and increased concentration of wealth among emerging marijuana corporations. The industry poses what some capitalists have called a “beautiful opportunity” for capital worth up to $160 billion.

As states begin to regulate the marijuana industry, the people who work in informal marijuana economies — mostly working-class Black and Latinx folks — have been largely left out of formal businesses. Rules that restrict licenses to justice-system-involved people, lack of capital access, and discrimination have all made it difficult for people of color and working class folks to enter the commercial cannabis market. At the same time, the trauma of the War on Drugs means that many people of color are simply too afraid to try.

As a result, most of the weed-related businesses in Colorado are owned by white people. In response to this, and to community organizing, cities like Somerville, MA, and Oakland, CA, have implemented initiatives to encourage representation of Black, Latinx, and justice-involved people in the legal cannabis industry. Community groups continue to lobby for reparation for those impacted by cannabis-related policing.

Power, Pleasure, and Pot to the People

But simply encouraging racial diversity, lowering economic barriers to entry into the commercial cannabis industry, or wiping past marijuana-related convictions isn’t enough to ensure long-term cannabis justice. As long as the cannabis industry remains privatized, neither cannabis workers, nor the racially oppressed and imperialized communities whom the War on Drugs has particularly harmed, will get their due. A truly just cannabis industry is worker-controlled, and part of a broader socialist system.

The criminalization of cannabis is a violent means of labor, racial, and resource control. But it’s also a form of cultural and spiritual violence against colonized and imperialized communities who have culinary, spiritual, and medicinal relationships with cannabis. As with capitalist control of agricultural systems — such as Monsanto’s mass patenting and privatization of seeds — the transformation of food and plants into commodities alienates people from their own labor, culture, nature, and land.

When socialists talk about workers’ control of production, we don’t just mean a bare-bones production of necessities. We mean collectivized forms of rich, deep life. We mean sharing in the production of, and benefit gleaned from, goods and practices that give us purpose and pleasure: beautiful food, meaningful objects, and — for people across 5,000 years of human history — culturally significant intoxicants like cannabis.