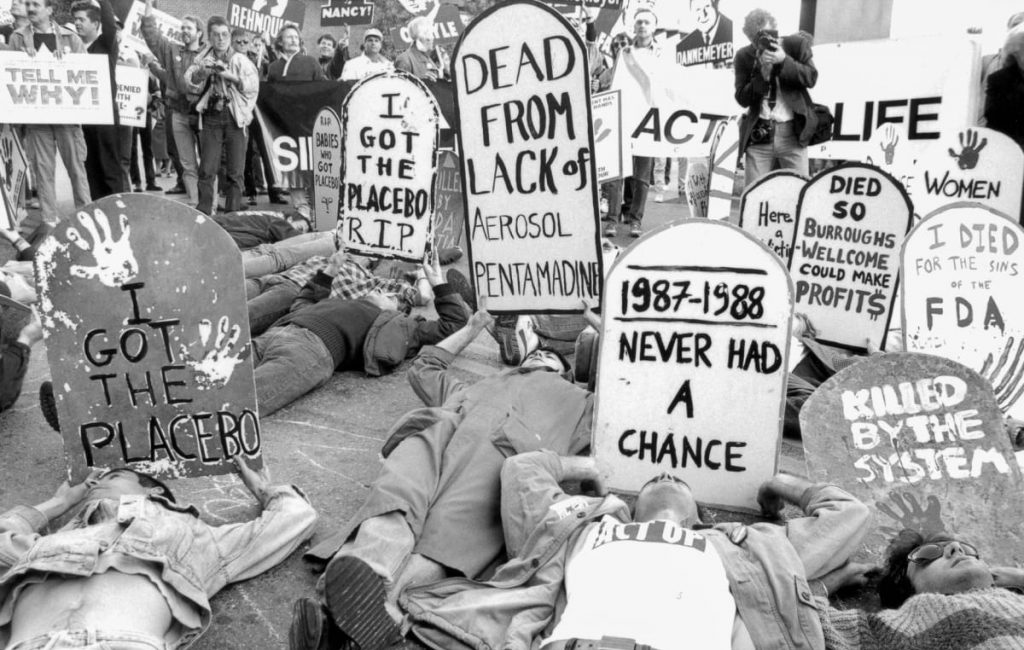 Today, December 1, is World AIDS Day: a day for people worldwide to mark the fight against HIV and commemorate the lives of those affected by HIV/AIDS. Approximately 38 million people are currently living with HIV worldwide, and tens of millions of people have died of AIDS-related complications. Forty years after the start of the HIV pandemic, while there is treatment to suppress viral load and prevent disease progression, there is still no permanent cure or effective vaccine. Although HIV testing capacity has vastly improved, almost one in five people living with HIV are unaware of their status, and up to two-thirds of people living with HIV may not have regular access to care or medication. Countries in the Global South have seen the greatest increases in HIV incidence and some of the lowest rates of HIV medication uptake and adherence, a direct parallel to the vaccine imperialism we’re seeing in response to the Covid-19 pandemic. The “missionary-style” nonprofit approach, where imperial powers offer paltry donations of critical medications is woefully insufficient to address the scale of the crisis.

Although for decades, there was little funding for research on HIV/AIDS, there has since been a great body of research and development of methods that could be used to drastically reduce, if not eradicate HIV/AIDS incidence. The primary methods of decreasing HIV transmission  currently are prevention for those that are HIV-negative, and antiretroviral therapy (ART) for those who are HIV-positive. Pre-exposure prophylaxis (PrEP) works by blocking an enzyme called HIV reverse transcriptase, preventing the virus from replicating and creating more copies in the body. The once-daily pill reduces the risk of getting HIV from sex by more than 90 percent, and among people who inject drugs, it reduces the risk by more than 70 percent. Post-exposure prophylaxis (PEP) is another preventative measure that is taken within 72 hours of HIV exposure for four weeks to prevent the HIV virus from replicating in the body’s immune cells. Other aspects of essential prevention care include clean needle exchange programs to prevent transmission among people who inject drugs as well as sexual health resources such as condoms.

Antiretroviral therapy works by suppressing the replication of the HIV virus to lower the amount of plasma HIV-1 RNA in the person’s blood. When viral loads are undetectable, this means that there are not detectable levels of virus in the bloodstream. When viral loads stay undetectable, there is virtually no risk of HIV transmission. Ensuring, therefore, that those living with HIV/AIDS have access to and regularly stay on their antiretroviral therapy and keep their viral loads undetectable is critical to ending new infections and, therefore, bringing the HIV pandemic to an end worldwide. However, this is not currently possible due to the privatized healthcare system and a pharmaceutical system based on profits, not on fighting disease or improving long-term health outcomes.

For World AIDS Day, Biden released documents outlining the U.S. strategy towards ending the HIV epidemic, presenting goals such as preventing new HIV infections, improving health outcomes for people with HIV, reducing health inequity, and creating a more coordinated national response to stop the epidemic by 2030. The strategy also calls for states to “repeal or update” HIV criminalization laws, but provides no details about how the federal government will enforce that, and will ultimately have no 35 states with laws that criminalize HIV exposure. In his presidential budget request, Biden requested $670 million towards the Ending the HIV Epidemic in the U.S. initiative and $450 million to provide housing assistance and supportive services for low income people with HIV. It is unclear how much of that money will actually be directed to those services, as the budget still has to be proposed to Congress and be passed by the House and Senate Budget Committees. Ultimately, none of these initiatives touch the billions in profit that corporations make by selling over-priced medication to people living with HIV, as many patients just can’t afford it. It does nothing to provide the consistent free access to medication that is really needed to combat HIV on a broad scale.

Meanwhile, the pharmaceutical company Gilead wants to change its pharmacy reimbursement model on HIV drugs that patients obtain through its Advancing Access Patient Assistance/Medication Assistance Program (PAP/MAP) starting January 1, 2022, making it difficult for patients who rely on the program to get free PrEP medication to continue their care and remain HIV-negative. Clearly they have no reason to penny-pinch, as they generated $7.4 billion in sales this past year. They produce the antiretroviral medication Biktarvy, for which sales increased by 20 percent year over year, to a record $2.3 billion. They also make the medication Descovy, which was approved as a PrEP medication in 2019, generating $433 million. Under a capitalist, profit-driven healthcare system, billion-dollar corporations give away negligible amounts of medication in the name of “providing access to healthcare” while continuing to safeguard broad access to medication and healthcare in order to ensure profitability. Under vast pressure from the public, government programs and nonprofits will step in to help subsidize care, like HIV care and treatment and provide much needed resources like housing — models that are unsustainable and eventually perish under capitalism. Indeed, one only needs to see the massive health inequity underway during the Covid-19 pandemic, as, in the face of economic crisis, welfare and supportive resources were the first to go in order to curb social spending.. Goals such as “reducing health inequity” and “improving health outcomes” are incredibly vague and fundamentally do not address the disproportionate risks that Black and Latinx people, trans folks, and young gay and bisexual men face.

People living with HIV/AIDS have long fought the control that profiteering pharmaceutical corporations have had over their lives. Early on in the HIV epidemic in the U.S., protesters railed against the Food and Drug Administration and Burroughs Wellcome, the pharmaceutical company that manufactured AZT, the only approved AIDS drug at the time and one that was too expensive for most people living with AIDS to afford. More recently, in 2019, a coalition called PrEP4All tried to fight back against the corporation Gilead for postponing development of a safer HIV prevention drug so that it could continue to gain monopoly profits from its older combination HIV drugs, before those drugs went off patent and faced generic competition. Only after a decades-long fight have generic forms of Truvada, a form of PrEP, been allowed to be produced and sold, dropping the cost of PrEP from $1500-$2000/month to about $50/month.

Today we need to build a movement, reviving the militant legacy of ACT UP and other activists that demands free HIV medication and free preventative care in the forms of PrEP, PEP, and harm reduction resources like clean needle exchange programs or sexual health services.

The militancy of HIV/AIDS activists and disability rights activists, who are also often impacted by the greed of pharmaceutical corporations, must be coupled with militant working-class methods to fight for universal, public health care under the control of workers and patients, put toward the collective needs of society. Patients, community members, and healthcare workers should be making collective decisions about how resources are allocated, not Joe Biden or Gilead Sciences. A free public healthcare system under the control of these groups would ensure that people have access to preventative care and ongoing treatment, from each according to their ability to each according to their need.. HIV is no longer a death sentence, but capitalism can still make it one for those unable to access medication or preventative care. To honor the lives of those currently living with HIV and AIDS, and those who have passed throughout the years, we must fight for free preventative care and treatment as means to truly end the HIV pandemic.