November 25 is the International Day for the Elimination of Violence Against Women. Why was this date chosen and what does it have to do with the Mirabal sisters? 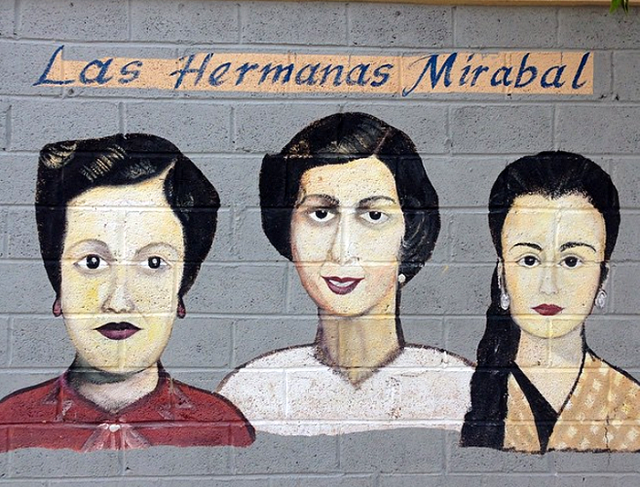 36 years ago, at the First Latin American and Caribbean Feminist Conference, November 25 was established as the International Day For The Elimination of Violence Against Women. Around the world, this day is marked by marches, protests, and artistic expressions against gendered violence. As the US is rocked by the revelations of thousands of women who have come forward to denounce sexual assault and violence, this day has increased importance as a reminder of the state of women’s rights.

The 31 years of Trujillo’s cruel ironclad rule were characterized by the severe repression of labor and trade union movements, of Leftist and youth organizations, and of his opponents and dissidents. Trujillo ruled with an absolute lack of democratic freedoms. It is estimated that his regime brought about the death of more than 50 thousand Dominicans and thousands more of Haitians who were specific targets in the killings on October 1937, now referred to as the “Parsley Massacre.”

By 1960, several Latin American countries experienced resounding political changes. There were the collapse of the dictatorships of Rojas Pinalla in Colombia and Pérez Jiménez in Venezuela. A year earlier, the Cuban dictator Fulgencio Batista fled his country because of the triumph of Fidel Castro’s Revolution. In the Dominican Republic, a covert insurgency organized against Trujillo’s dictatorship.

With the idea of defending democracy and freedom, the Mirabal sisters joined the political group “June 14”. In 1960, they and their group bore the brunt of political suppression and Trujillo’s campaign of terror. The Mirabal sisters were detained on several occasions, tortured in clandestine sites and raped by Trujillo’s soldiers.

On November 25, 1960, when the Mirabal sisters were released from prison, their car was stopped on the highway. The three sisters and the driver were brutally beaten to death, and thrown into a ravine to simulate an accident.

The murder of the sisters sparked a strong sense of indignation among Dominicans and increased demonstrations of opposition and the Mirabal sisters became a symbol of struggle against the dictatorship. In 1961, Trujillo was killed and efforts by the family to maintain political control of the Dominican Republic failed.

In 1981, the first Latin American and Caribbean Feminist Conference was held in Bogotá, Colombia. There, it was proposed to establish November 25 as the International Day for the Elimination of Violence against Women , which pays homage the Mirabal sisters — Patria, Minerva, and María Teresa Mirabal — women who are an example of organizing against oppression. Years later in 1999, the General Assembly of the United Nations voted for November 25 to be recognized as the day of the Elimination of Violence against Women.

The Mirabal sisters are honored because they stood up against the oppression of the state. Ostensibly, this is different from the kind of violence that most women suffer– often at the hands of boyfriends and husbands. However, the massive #NiUnaMenos marches point out, the state bears much of responsibility for violence against women; the state is responsible for holding up patriarchy. It is responsible for the lack of domestic violence shelters and other resources for women who experience violence; it is responsible for the low wages that keep women economically dependent on men; it is responsible for enforcing and perpetuating sexist elements in society. Furthermore, politicians perpetrate sexual assault against women, as the past few weeks have clearly demonstrated. And yet, when women come forward state institutions shame and discredit their stories. In this context, thousands of women around the world are rising up to demand an end to violence against women.

As the daughter of one of the murdered butterfly sisters wrote “If they kill me I shall reach my arms out of the grave and I shall be stronger.” Today we must be thousands of arms organizing the international fight against gender violence in honor of the legacy of butterflies.