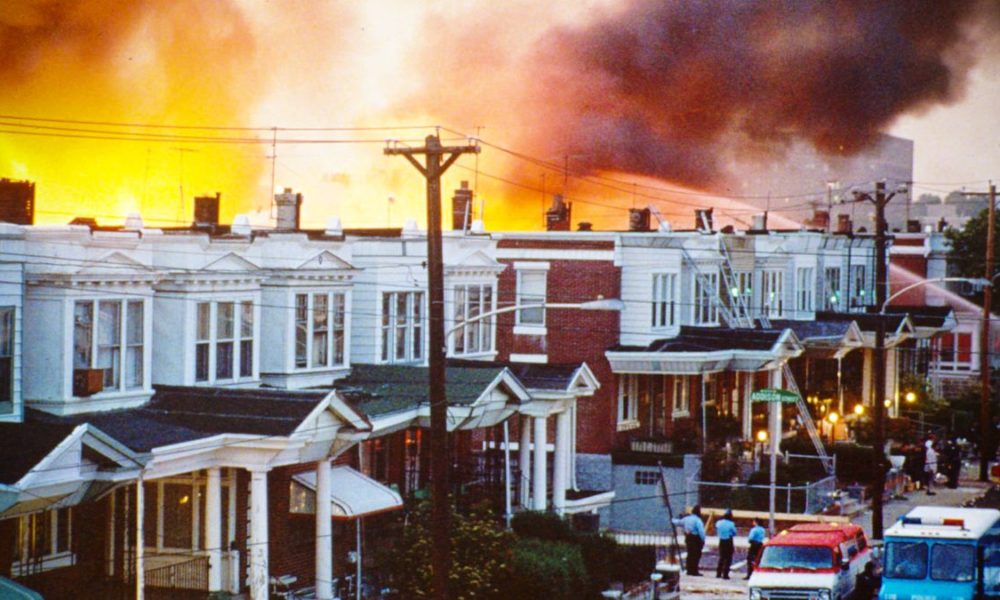 Rowhouses burn after local officials dropped a bomb on the MOVE house, home of a black liberation group, in Philadelphia on May 13, 1985. | AP

This article was originally published on the Socialist Resurgence website.

May 13, 2020, is the 35th anniversary of the day Philadelphia police dropped a bomb on a home in a working-class neighborhood. The resulting conflagration and police gunfire killed 11 people, including five children, and destroyed 61 houses.

The establishment narrative is that the bombing was the result of a “shootout” between Black radicals and cops, but this is not true. It was a military assault designed to wipe out the MOVE organization. MOVE, a back-to-nature group founded in 1972 by John Africa, had been the subject of police harassment for years and the target of a violent attack that landed nine MOVE supporters in prison. Today, as calls for an official apology from the city grow louder, it is necessary to review what happened.

The 1978 attack on MOVE in Philadelphia’s Powelton Village neighborhood was a dress rehearsal for the May 13, 1985, police bombing on Osage Avenue. Police harassment of MOVE in Powelton Village resulted in an almost year-long siege and 50 days when no one was allowed to enter or leave the house, as cops attempted to starve MOVE out.

On Aug. 8, 1978, at 4 a.m., 600 cops surrounded the house as “… police made the first move. O’Neill ordered a bulldozer, which had a Lexan plastic shield to protect the operator from gunfire, to mow down the barricade. A long-armed ram tore the windows out of the upper floors. With the windows gone, fire hoses threw streams of water into the house” (S.A. Paolantonio: “Frank Rizzo, The Last Big Man in Big City America”).

Just after 8 a.m., shooting started, and police officer James Ramp was struck and killed by so-called friendly fire. Police fired bullets, tear gas, and water cannons into the house. MOVE members surrendered, and cops savagely beat Delbert Africa in full view of news cameras. Delbert Africa later recalled the incident, “I’m unconscious, and that’s when one cop pulled me by the hair across the street, one cop started jumping on my head, one started kicking me in the ribs and beating me.”

Cops claimed to find weapons in the MOVE house. Police ordered the house razed later that day, and any forensic evidence related to the standoff was destroyed.

Nine MOVE members—Chuck, Delbert, Eddie, Janet, Janine, Merle, Michael, Phil, and Debbie Africa—were tried and convicted in the death of Officer Ramp, in spite of evidence that he was killed by the gunfire of other cops. Seven of the MOVE 9 are now out of prison after 40 years. During the long decades of incarceration, two of the MOVE 9 died in prison. At the time, John Africa was found not guilty on federal conspiracy and weapons charges.

“At his press conference following the cop assault, Frank Rizzo, then the mayor, looked directly at Mumia (Abu-Jamal) and declared that a ‘new breed of journalism’ was to blame for Ramp’s death and that someday those like Mumia were ‘going to have to be held responsible and accountable.’” (“The Fight to Free Mumia Jamal” by Rachel Wolkenstein)

Mumia Abu-Jamal, a former Black Panther Party member had become a respected radio journalist and covered the Powelton Village siege and assault. Mumia’s sharp criticisms of the PPD, and his refusal to back down in his advocacy for justice for the MOVE 9, cost him his job as a journalist. He took a job driving a taxi to pay his bills. On December 9, 1981, just months after John Africa’s acquittal, Mumia was shot, severely beaten and charged with the shooting death of Police Officer Daniel Faulkner. The fight to free Mumia continues today.

After the Powelton Avenue confrontation, MOVE members relocated to the house at 6221 Osage Avenue. From the beginning, the house was under almost constant police surveillance. MOVE continued to fight for the freedom of their incarcerated members—political prisoners known collectively as the MOVE 9.

In the meantime, members of the PPD Civil Affairs unit solicited neighbors to assist in gathering information on MOVE supporters. In May 1984, the Police Commissioner, Gregore J. Sambor, ordered the drawing up of a plan to deal with MOVE. A replica of the MOVE house was constructed, and police made numerous trial runs at detonating a bomb on the roof in order to breach the roof. SWAT officers also worked with the fire department to gauge the effects of using a “squirt” truck to deluge the roof with water.

In the run-up to May 13, police and city officials, including Wilson Goode, the city’s first Black mayor, vilified MOVE as dangerous, violent terrorists. The failure of a raid on Aug. 8, 1984, the anniversary of the Powelton Avenue attack, appears to have been an attempt to provoke a violent overreaction by MOVE. After this abortive raid, the anti-MOVE rhetoric from officials and police harassment increased.

A few days before the raid, Judge Lynne Abraham, later the district attorney of Philadelphia, signed arrest and search warrants based on the false assertion that MOVE possessed a cache of weapons and explosives. The arrest warrants were for four members of the group—Frank James Africa, Ramona Africa, Conrad Africa, and Theresa Brooks Africa. There were seven specific charges, including criminal conspiracy, possession of explosives, and riot. This plan was set in motion by the police commissioner and Mayor Wilson Goode with the support and cooperation of local, state, and federal agencies.

On Mother’s Day, May 12, police started to tighten access to the neighborhood and residents were ordered to evacuate. Those who refused to leave were threatened with arrest. By 10 p.m., the street was locked down. The house at 6221 Osage Avenue was surrounded by 77 cops, while hundreds more kept the area cordoned off.

At 5:35 a.m. on May 13, Sambor shouted over a bullhorn, “Attention MOVE! This is America! You have to abide by the laws of the United States.”

Soon after Sambor’s ultimatum, a fire department “squirt truck” deluged the house with 1000 gallons of water per minute to dislodge a structure on the roof that the police referred to as a “bunker.” Cops fired tear gas and smoke grenades at the house. At the same time a team of cops entered the house next door and tried to blow holes in the wall between the two homes with plastic explosives.

From 6 a.m. until about 7:30, police fired more than 10,000 rounds of ammunition at 6221 Osage Ave. Afterward, two handguns, a shotgun, and a .22 rifle were found in the ruins of the MOVE house. Cops were equipped with 16 M-16s, Thompson submachine guns, UZI submachine guns, 50-caliber machine guns, Browning Automatic Rifles, M-60 machineguns, and a 20mm anti-tank gun as well as handguns, sniper rifles, and shotguns. The following day, city officials falsely tried to claim that the majority of the gunfire came from MOVE.

During the attack, fire trucks sprayed almost 460,000 gallons of water onto 6221 Osage over more than five hours. Police teams on both sides of the house used explosives to breach the walls in order to pump tear gas inside. By 10:45 a.m., nine explosions had been set off by cops. The front porches had been blown off four houses on the street.

The bomb and aftermath

Community members and family of MOVE members gathered on nearby streets. Activists tried to reach out to Goode, pleading for an end to the assault. The effort to dislodge the rooftop structure with the fire trucks failed, and an attempt to obtain a construction crane to do the job was reportedly vetoed by Goode because of the expense.

Police decided to drop a bomb from a state police helicopter. They referred to it as an “explosive entry device.” The bomb was no small device, containing both the explosive Tovex and about three pounds of the military demolition explosive C-4. The force of the explosion splintered the rooftop structure and ignited a fire. The fire was made worse by the presence of two gas cans on the roof.

The decision by Sambor to “let the fire burn” resulted in the fire spreading and destroying 61 homes. This happened despite the fire trucks and 150 firefighters who were already set up a block away. Fire crews were ordered to spray water on the adjoining house to limit the fire to 6221 Osage Ave.

MOVE members had been sheltering in the basement, but as the fire intensified, it was decided to attempt to leave via a garage at the rear of the home. According to the later testimony of Birdie Africa, one of the two survivors, a MOVE adult, shouted that “the kids are coming out!” Among the hundreds who gathered at the police barricades, people began to shout “Murderers! Murderers!” Rocks and bottles were thrown, and riot police were deployed to push the crowd back.

The investigation afterward revealed the willingness of the state to wipe out anyone they see as an opponent. Not even one of the perpetrators of this foul crime was held accountable—not the mayor, not Sambor, nor any of the cops involved. Ramona Africa, however, was convicted of riot and conspiracy and served seven years in prison.

Recently, Wilson Goode has expressed his opinion that the city should issue an apology for the MOVE bombing. Mayor Jim Kenney and City Council President Darrell L. Clarke have refused to participate in any process that leads to an apology for this gross violation of human rights.

Writing in the Guardian, Goode expressed his regret to all involved, saying, “This is the fourth time I’ve publicly apologized. My first official apology on behalf of the city came on 14 May, 1985 in a televised address to the citizens of Philadelphia, to the Move family and to their neighbors. Today I would like to apologize again and extend that apology to all who experienced, and in many cases continue to experience, pain and distress from the government actions that day. They include the Move family, their neighbors, the police officers, firefighters and other public servants as well as all the citizens of Philadelphia” (italics, my emphasis).

In reality, Goode spoke far differently to the press several times. On May 14, 1985, he portrayed the police assault as a necessity, saying,  “If I had to make the decision all over again, knowing what I know now, I would make the same decision because I think we cannot permit any terrorist group, any revolutionary group in this city, to hold a neighborhood or a whole city hostage. And we have to send that message out loud and clear, over and over again.”

Including the cops who participated in the massacre as “victims” strains the imagination. The city’s inability to honestly deal with the crime committed in the name of the “City of Brotherly Love” once again leaves the wound unhealed. It is past time for an apology from the city, the police department, and the entire political system. And the apology must be linked with reparations for those who were truly victimized, plus criminal punishment for those in authority who were perpetrators of the MOVE massacre.