The Republican Covid Relief Plan: Billions for State Repression, Nothing for Workers

Senate Republicans have released their version of the HEALS Act, a new stimulus plan. The proposals benefit corporations and the repressive mechanisms of the state, and the plan is designed to force people back to work. 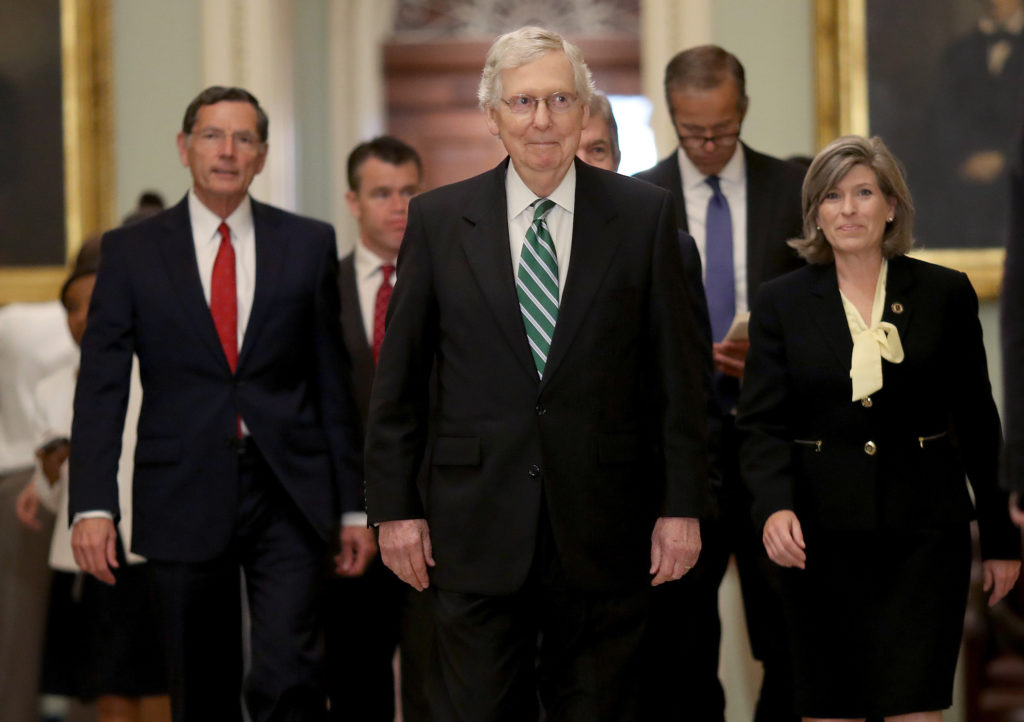 On Monday, Republicans in the Senate unveiled their new $1 trillion stimulus plan. The HEALS Act — short for Health, Economic Assistance, Liability Protection and Schools — is full of handouts to repressive state mechanisms, protections for businesses, and measures to ensure the dangerous reopening of businesses.

The plan comes as several key provisions of the CARES act, enacted in March, are set to expire this week. These include an eviction moratorium for tenants in buildings with federally-backed mortgages and an extra $600 per week in expanded unemployment benefits. Despite these provisions in the CARES Act, we’ve seen literal bread lines at food pantries as people struggle to make ends meet. The expiration of these provisions could lead to a “tsunami” of evictions and send millions over an “income cliff” as the official unemployment rate currently stands at 11%, with rates of over 20% in many cities.

These are the key parts of the proposal:

And here are some things that aren’t in it:

This comes as Covid cases are surging across the country, with hospitals overflowing and some states needing to backtrack on reopening plans.

The stimulus plan includes measures to help shield re-opened businesses from coronavirus-related liability for the next five years. In other words, it would be more difficult for employees who become infected to sue businesses and institutions. In other words, it’s carte blanche to employers to ignore safety regulations.

Republicans have justified these measures by saying that litigation against healthcare workers and “brave business people” will become the “second pandemic”— as if lawsuits against the rich can be in any way comparable to a deadly disease that has devastated the globe. But also, litigation has not increased during the pandemic, although it certainly should have given how many employers were dangerously risking the well-being of their employees. However, in states such as Utah, which have implemented liability protections, bosses have told employees to ignore safety regulations, leading to high rates of infection.

During this pandemic, we have seen how time and time again, businesses are happy to sacrifice their workers for profit. Because bosses are not risking infection at the front lines of factories, warehouses, and meatpacking plants, they force their employees to work without implementing social distancing measures or providing protective equipment such as masks. The Department of Labor’s Occupational Safety and Health Administration (OSHA) has likewise avoided providing guidance. As a result, businesses are incentivized to open under unsafe conditions and thwart any safety guidelines that interfere with their profits. The result will be huge rates of infection and death, with no recourse to legal action for those who are affected.

Forcing People Back to Work

The unemployment plan being proposed is nothing short of a travesty against the working class. It proposes $200 a week to unemployed people, which would expire in October, when the responsibility would shift to states to pay 70% of a worker’s prior earnings. This comes on top of the states’s unemployment plans, which in most states averages around 45% of a worker’s prior wages.

Given that 80% of people in the United States live paycheck to paycheck, a 30% cut in earnings would be catastrophic for most people. Likewise, $200 a week is impossible to live on. $800 a month pre-tax on top of the measly crumbs from state unemployment isn’t enough for rent, much less food, internet, phone bills… much less paying off the student and healthcare debts that plague the working class.

The Republican Plan is a plan to force people back to work, regardless of the current health crisis. Trump and the Republicans want the economy up and running; they want schools and businesses to open, and this plan is a reflection of that. The fact that there is so little unemployment aid is quite literally a plan to starve people out of their homes.

Trevor Burrus of the Cato Institute, a conservative D.C. think tank, said: “Many will hit a point where the trade-off will be between possibly getting Covid-19 and being able to feed their families. The disease doesn’t look so bad then.”

Likewise, the fact that there is no help for the millions of people facing evictions highlights the attempt to starve people out of their homes. Want to avoid homelessness? Get out and work, regardless of how many people are dying of Covid, regardless of pre-existing conditions or of the elderly people you come in contact with.

Forcing People Back to School

The Republican Plan is also about forcing people back to school. It provides $105 billion for education, with $70 billion targeted to K-12 schools, but two thirds of those funds are tied to a reopening plan. This is a version of Trump’s attempt to force schools open, which he has been speaking about for weeks, despite the surging Covid cases around the country.

Teachers have been outraged at these attempted re-openings: social distancing is impossible in overcrowded classrooms. Studies have shown that kids can and do spread the virus. And yet, this “aid” package is an attempt to force schools to reopen by tying this round of Covid funding to re-opening. That means that schools that are online and need funds for technology for students or training for teachers won’t get support.

Handouts to Repressive Mechanisms of the State

Perhaps the most unconscionable thing to come out of the Republican Covid-19 relief bill is aid to the repressive mechanisms of the state, including F-35 jets for the military, increased National Guard funding, and a new FBI building. This comes on the heels of the $741 billion National Defense Authorization Act overwhelmingly passed by Democrats and Republicans last week. This bill was already a 3 billion dollar increase from defense funding last year. And now, the Republicans want to spend even more money on “defense.”

In some ways, this should come as no surprise. The CARES Act that passed in March had already allocated $10.5 billion to the Defense Department for coronavirus-related spending. And, after all, as Black Lives Matter protesters confront federal troops across the country and Trump promises to send federal forces into cities, the state will need repressive forces; the FBI will need to be in tip-top shape to investigate and repress the insurgent left. Even more repressive forces will be needed if anti-eviction organizing takes off, as well as strikes against re-openings.

As Trump escalates tensions with China, the increase in repressive forces like F-35s can be seen as a show of strength. It’s a clear message. The U.S. may be in the middle of a Covid-19 crisis, but it will spare no expense in the already over-blown repressive mechanisms in the national and international arena.

The Democrat-controlled House of Representatives voted for a $3 trillion plan in May that would provide more protections for the working class than this brutal anti-worker Republican plan, while still falling short of any sort of real support for workers’ suffering amidst the economic and health crisis. However, neither of these plans is going to pass — and if Democrats controlled both chambers of Congress, they would put forward a much less favorable plan. The Democrat’s plan is for show, so that they can look like they are on the side of the working class in an electoral year. But as usual, it’s smoke and mirrors. Now, we will see as both parties put on a show of negotiating meager benefits for the working class. However, they will both still agree on the need for fiscal responsibility, on the need to help businesses and most importantly, on the need for law and order in the process.

While members of Congress make over $3,600 a week (and that doesn’t include job perks like travel allowances, subsidized healthcare, hefty pensions, and many other lifetime benefits), they’ll haggle over $200, $300, or $400 a week for the working class. While Jeff Bezos makes $149,353 per minute, Congress will wring their hands over whether $600 is too much for the people who make this country run.

This pandemic has been immensely profitable to some sectors of the capitalist class; Goldman Sachs had their second best quarter yet, investors are preparing for a real estate bonanza, and others like Mark Zuckerberg are exponentially increasing their wealth. The way forward to fight against this isn’t to hope that the negotiations go our way in Congress — they won’t.

The way forward is in the struggle in the streets: the Black Lives Matter protests that have already won reforms from the government. The way forward is in the possibility of teachers strikes to demand safe working conditions and staying closed until it is safe to reopen— which it is not.. It is in the anti-eviction organizing that refuses to let a single family lose their home. These plans— both the Democrats’ and the Republicans’ — are an attack on the working class, and they must be fought back by the working class.