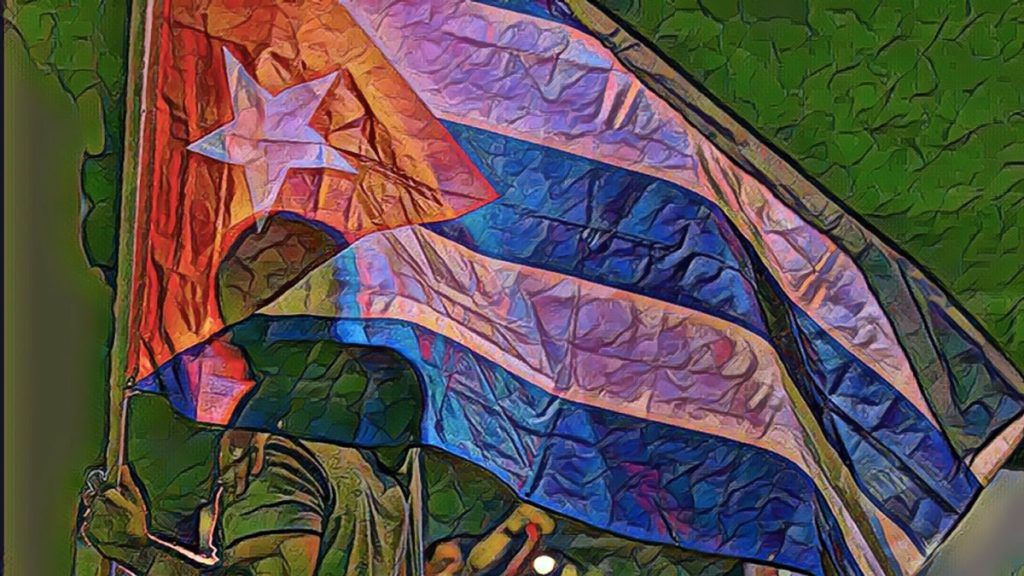 On July 11, demonstrations took place across Cuba that led to clashes and repression and ended with hundreds of people arrested — including leaders and activists of the Cuban Left. The imperialist embargo suffered by Cuba for decades and the Cuban government’s pro-capitalist restorationist measures have led to a marked increase in social inequality. The effects of the pandemic have further aggravated the social situation. All this together triggered the protests.

These recent events have put the world’s spotlight on Cuba, and media everywhere have been focused on the situation on the island. It should come as no surprise: Cuba’s revolution was the first in Latin America in which the bourgeoisie was expropriated and imperialism was expelled, along with all its economic and political interests. Cuba has always been besieged by imperialism. It is a country run by a bureaucracy that in times of crisis has never offered a better way out than to move forward with its restorationist measures — with all the consequences these have had for the Cuban people.

To get a more in-depth perspective on the situation, we spoke with Taliesin Álvarez, a philologist, poet, a member of the Union of Young Communists and of the Hermanos Saíz Association, and a member of the editorial board of the left-wing Cuban blog Comunistas.

What caused the mobilizations on July 11?

The small-scale social outburst in Cuba on July 11 had several causes. The first is that life in Cuba has become more difficult because of Covid-19 on a global scale. To this must be added the U.S. blockade and its tightening by the Trump administration, the accentuation of social inequalities resulting from the encouragement of private enterprise initiatives in the national economy and the recent monetary ordering,1Translator’s note: The ordenamiento monetario (monetary ordering) on New Year’s Day was a macroeconomic move taken by the Cuban government to unify its two currencies — the Cuban peso (CUP) and the convertible peso (CUC) — into a single Cuban peso. The dual-currency system had been established in the 1990s after the collapse of the Soviet Union, which resulted in Cuba losing its chief financial patron and needing the CUC as a currency that could be more or less on par with the U.S. dollar to help bring dollars and hard currency to the island to keep the economy afloat. the lack of worker’s democracy, and anti-communist propaganda from right-wing Cuban Americans and the Right throughout the world.

What impact does the 61-year-old imperialist blockade have on Cuba today?

Cuba — more so than many countries — cannot survive without world trade. Its condition as an underdeveloped country prevents the development and modernization of its industry and access to new technologies and production techniques. Cuba has limited natural resources that are required by developed countries. The U.S. blockade interferes with this necessary exchange between Cuba and the rest of the world. It is an obstacle to Cuba’s development and the wellbeing of the Cuban people. The blockade prevents access to credit, supplies, medicines, and technologies that are vitally important to the nation’s economic and social functioning, and that are needed to promote Cuba’s ability to contribute to the world in a host of areas. The blockade diminishes the positive role of the Cuban revolution’s social conquests — a deliberate objective of imperialism aimed at minimizing in people’s minds the relevance of these conquests of socialism. It thus makes Cubans less capable of defending those conquests against the false, irrational, ignorant, anti-scientific, and anti-human-progress propaganda that paints a picture of capitalism as the best and most to which humans can aspire.

What has been the result of the Díaz-Canel government’s economic policies for the Cuban working masses? What has the government’s response been to the demonstrations?

The government’s economic policy is misguided, generating social inequalities, stimulating capitalist relations of production, and making state enterprises compete among themselves. The government’s response to the popular demonstrations has been as wrong as its economic policies. Social ownership and planning can still be glimpsed in economic policy, but have been weakened. The government repressed and censored people involved in the demonstrations who neither vandalized anything nor were being paid by imperialism. Those people make up the majority of the protesters, who are unhappy with the hardships of their lives. Socialism does not repress and does not censor. A system that calls itself socialism and takes such action against freedom is a bureaucratically deformed workers’ state in which the workers neither make the decisions nor feel that they own the means of production. If workers, students, and intellectuals were the decision makers, they would never rise up against themselves, and they would respond with greater force to the constant imperialist aggression that threatens the sovereignty and the conquests of the Cuban Revolution in the social sphere. This revolution is still backed and supported by the majority of Cubans.

Amid the riots, the government blocked the internet and thus left the population incommunicado. This was done to preserve its power and its manipulation of society through television and radio. These media have insisted that the demonstrators were violent individuals paid by imperialism, pro-capitalist gusanos, and confused revolutionaries (some of whom were). Television and radio did not show the facts, but did show the government’s response.

As we’ve shown on the Comunistas blog, there were not only confused revolutionaries at the demonstration but also revolutionaries who think differently, some of whom were arrested and fired from their jobs. How can a socialist state fire workers with impunity during this precarious pandemic situation? People have the right to demonstrate everywhere and to speak their minds, but that threatens the privileges of a bureaucracy that continually promotes obedient trust among the masses so it can exploit and manage them as it pleases. The Communist Party of Cuba is complicit in all of this with its flawed Stalinoid approach to leading the country through a successful transition to socialism. This censorship power disseminates through its media a false, incomplete, nonobjective, and non-self-critical vision of these and other key issues for the advance of socialism in Cuba, thus slowing down, hindering, and jeopardizing its future.

Within the framework of this entire situation, what perspective do you see for the island’s workers and what should be done?

We must defend socialism and analyze the country from a non-Stalinist and truly revolutionary Marxist perspective. We must communicate these analyses to the workers through different channels and to all those in the state apparatus who have not renounced the revolution in the face of their personal privileges. We must promote debates on these matters and work to update theory about revolutionary power so that it serves the purposes of the revolution. It is necessary to force the bureaucracy to yield to workers’ democratic exercise of power, as demanded by the resistance, because the bureaucracy opposes the interests and practice of revolutionaries.

Defending socialism in Cuba requires establishing a socialist democracy in which workers have full freedom to express themselves, to  organize, and to direct production. It requires being able to satisfy social needs without having to turn to the sphere of private management. It requires ongoing, but not hasty, progress toward the demolition of the private sector, and not seeking solutions in that sphere; to make continuous, though not hasty, progress in the demolition of the mercantile system. We must monitor inequality and exploitation and take firm action against those enterprises, and apply more equitable wage scales. There must be an end to censorship, and we must increase the preparation of and the culture of workers. It requires defending the rights of the LGBTQ+ against taboos, violence, and inculturation to eliminate censorship; to prepare workers better and raise their level of culture; to defend the rights of the sex-diverse community against taboo, violence, and ignorance. We have to resolve as many needs as possible, and do so socially, raising our level of food sovereignty and raising quality and productivity in every sector of material production. Planning, democracy, and elimination of the private market, coupled with satisfying societal needs, will allow socialism to win against capitalism and keep capitalism from reproducing itself both in reality and in people’s consciousness.

Socialism can begin in an underdeveloped and blockaded country such as Cuba, but it cannot be completed here. Cuba needs a favorable socialist environment to develop and deepen its revolution, its struggle for human development and the wellbeing of its people. Internationalism is of tremendous importance in defending socialism in Cuba — the support and solidarity of Cuban workers with workers elsewhere, and the support and solidarity of all the workers of the world with the workers and revolutionaries in Cuba who are fighting against capitalism, imperialism, and bureaucracy.

I raise my own modest voice to all the workers of the world. Support our communist revolution and say it loud: Down with bureaucracy! Socialism and freedom!

First published in Spanish on July 25 in Ideas de Izquierda.