The U.S.-China Summit: Containing China Is a Bipartisan Affair

The first Biden-era meeting of U.S. and Chinese government officials was marked by political theater. But the summit demonstrated that Biden, with his hostile policy towards China, has more in common with his predecessor than he would like to admit. 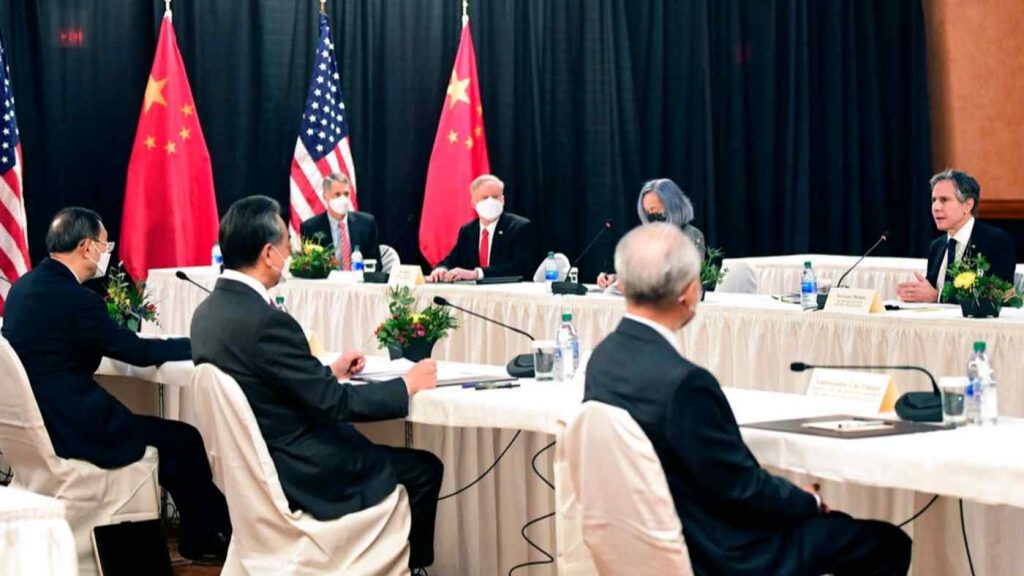 President Joe Biden’s fall as he boarded the Air Force One to Atlanta captured the attention of the media and social networks for hours. Both the presidential entourage and Biden himself — who recovered quickly and even made the traditional military salute from the door of the plane — attempted to downplay the mishap. But the inopportune presidential stumble went viral on the same day that the White House aimed to show signs of strength against China, the geopolitical rival par excellence of U.S. imperialism.

Here we arrive at the most important foreign policy news of the past week: the first official meeting of the Biden era between high-ranking U.S. and Chinese government officials. The mini-summit took place on March 18 and 19, in the freezing city of Anchorage, Alaska. Participating on the U.S. side were Secretary of State Antony Blinken and National Security Advisor Jake Sullivan. On Beijing’s side were State Councilor Yang Jiechi and Chief Diplomat Wang Yi.

Expectations for this first “post-Trump” meeting were low — no one predicted a “reset” of the relationship between the world’s two largest economies, which has seriously deteriorated after four years of hostilities and trade wars. Moreover, the Biden administration has yet to define its strategy for dealing with the rise of China — or its foreign policy in general — beyond the general slogan of “America is back.”

The impact of the meeting remains uncertain. However, it appears that, more than the private negotiations, the key to this bilateral meeting was the televised opening, which functioned as a grand mise-en-scène, aimed first and foremost at the domestic audiences of the participants.

What was supposed to be a brief ceremonial exchange turned into an intense media dispute that lasted for an hour. Blinken took advantage of the cameras to make a diplomatic performance. He announced that the interest of the United States was to address China’s repressive actions in Hong Kong, the persecution of the Uyghur minority, and the situation in Taiwan. He once again accused the Chinese government of perpetrating cyber attacks against the United States and exerting economic pressures against U.S. imperialism’s regional allies, referencing the tariffs imposed by Beijing against Australia. He accused China of “threatening the order based on laws that maintain global stability.”

The Chinese officials responded in kind. The state councilor touted the achievements of Xi Jinping’s government, particularly in the handling of the coronavirus pandemic. He reminded his American counterpart that the United States did not represent universal “democratic” values, and that it had serious internal “human rights” problems such as racism, which the White House should address.

That these exchanges were merely spectacle is demonstrated by the fact that after this tension was broadcast live, the meeting continued in private as planned.

But to attribute all the geopolitical significance of the event to theatrality would be superficial. There is a structural contradiction between the imperial decline of the United States and the rise of China which, while not disputing world hegemony, has become the strategic competitor for U.S. imperialism. As Blinken said, China “is the greatest geopolitical test of the 21st century.”

The need to contain and delay China’s advance is a bipartisan state policy for the United States; the differences between Democrats and Republicans are in the realm of tactics. The Obama administration responded to that strategic threat with the so-called “pivot” to the Asia-Pacific region, which involved an economic and military policy of multilaterally isolating China through the Trans-Pacific Partnership. In contrast, Donald Trump chose the path of bilateral confrontation through trade wars. He gave new impetus to the Quadrilateral Security Dialogue — the ” Quad” — which was conceived under the George W. Bush administration. The Quad is a common security policy with Japan, Australia, and India meant to keep the Indo-Pacific region “open and free,” meaning free from China’s decisive influence.

The Biden administration appears to be following in Trump’s footsteps. Part of the choreography expressed in this first bilateral meeting with China was to position this administration in “a position of strength.” In the days leading up to the Alaska meeting, the U.S. president participated in a virtual summit of the Quad, whose countries have beefed up their military presence in the South China Sea to encircle China.

Defense Secretary Lloyd Austin, moreover, is currently in India as part of a tour of Asia to enlist his allies against China. According to the Pentagon chief, in the last 20 years, while the U.S. was focused on the Middle East, China modernized its military capabilities. While the disparity remains huge — U.S. military spending equals the defense budgets of the next 10 countries combined — it serves as the Pentagon’s justification for doubling the budget of the so-called “Pacific Deterrence Initiative” which includes the deployment of precision missiles in Japan and Taiwan targeting China.

Despite the gestures towards undoing Trump’s legacy, the Biden administration maintains greater continuity with its predecessor in foreign policy than it is willing to admit. In the Middle East, the promise to return to the nuclear agreement with Iran comes loaded with conditions and impositions. In addition, Biden has reaffirmed the United States’ strategic alliance with Saudi Arabia, despite having ordered the publication of the intelligence report on the role of Prince Mohamed Bin Salman in the murder and dismemberment of journalist Jamal Khashoggi. Meanwhile, Biden calls Putin a “killer.” In the document just published by the White House outlining its interim national security strategy, China is defined as “the only competitor potentially capable of combining its economic, diplomatic, military, and technological power to mount a sustained challenge to a stable and open international system.” Russia remains “determined to enhance its global influence and play a disruptive role on the world stage.” The report also singles out “regional powers” such as Iran and North Korea as threats to the security of the United States and its allies.

This hostile policy towards China is aimed at creating a social base at home — a public opinion favorable to more aggressive actions eventually. The Trump administration dangerously encouraged anti-Chinese sentiment among the U.S. population. The horrendous hate crime recently perpetrated in Atlanta against the Asian-American community, which left eight dead — most of them Asian women — should be seen in light of these imperialist policies.

First published in Spanish on March 20 in La Izquierda Diario.