There’s No Hope for the Democratic Party. But We Can Still Win Medicare for All

Bernie Sanders had a terrible night on Super Tuesday. But, the fight for Medicare for All and other progressive reforms aren’t about electing Sanders. They will only be won if the working class and oppressed fight for them without putting faith in a Democratic Party in the service of the capitalists and a “democratic process” rigged in favor of the establishment. 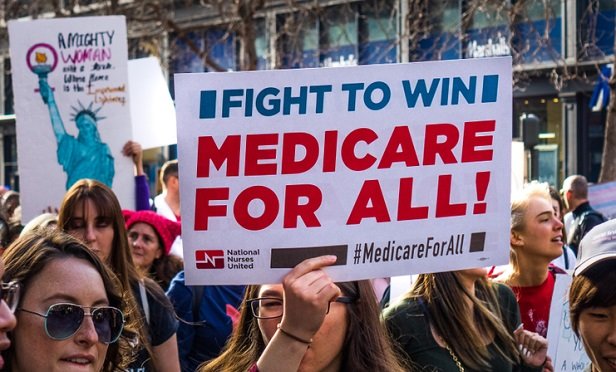 There is no sugar coating it. Last night was a terrible night for Bernie Sanders.

He lost Massachusetts, which he was expected to win by 7 points.

He lost Virginia, not by a narrow margin, but by 30 points.

He lost Texas, even though he was projected to pull off a victory.

It seems that after California, Sanders will be trailing Biden by about 75 delegates. The map of upcoming primaries looks bad. States like Florida, with their 219 pledged delegates are unlikely to support Bernie Sanders. And with Michael Bloomberg dropping out of the race and putting his millions behind Joe Biden, it looks even worse for Bernie Sanders.

I’m not sure anyone has the definitive answer to these questions, but my feeling is that the answer to the above question is no. Medicare for All polled with huge support in all outgoing polls, from Alabama (51 percent to 43 percent) to Texas (64 to 33 percent). Well over half of voters supported free college. And “socialism” is no longer a scary word: with a favorable view of socialism polling above an unfavorable view of socialism in Texas, California, North Carolina, and Tennessee.

And yet, the Democratic Party is on the path to nominating a bumbling conservative as their nominee. As many people have pointed out, Biden can hardly get a coherent sentence out; gaffes abound — just this week he confused his wife with his sister, talked about Super Thursday (instead of Super Tuesday), and botched the Declaration of Independence. Donald Trump is going to eat him alive on the debate stage. Joe Biden is not electable.

But I actually don’t want to make the electability argument. That’s not what this is about.

The biggest problem isn’t Biden’s gaffes. It’s his record. It’s his support for segregation, his leadership roles in the war on drugs and the war in Iraq. It’s the fact that he wrote the 1994 Crime Bill that imprisoned millions of Black and brown people and expanded the military industrial complex. It’s his role in the Clarence Thomas Supreme Court hearings, which Biden supervised as the chair of the Senate judiciary committee and during which he oversaw the systematic degradation of Anita Hill. In this sense, both Biden and Trump are united in a racist, sexist, and xenophobic program in the interests of American capitalists.

So how is this idiot well on his way to being the Democratic Party nominee?

This happened because, as Ezra Brain explains, “the establishment has decided that enough is enough and has organized to defeat Sanders — and on Super Tuesday, that establishment delivered.” The media and the establishment united to successfully bring back the corpse of Joe Biden after his fall in the polls in recent months. The media played up Sanders’ inane Cuba comments and the idea that a “socialist” could never win against Donald Trump. Barack Obama and his surrogates rallied behind Biden and he encouraged Pete Buttigieg to support Biden. As NBC put it, “there appears to be a quiet hand behind the rapid movement: former President Barack Obama.”

Despite the millions of young people who have been knocking on doors, phone banking and putting their all into Sanders’ campaign, it seems that this will be no match to the power of the Democratic Party establishment and the corporate media. The Democrats are the party of the capitalists and cutting into the profits of insurance companies with Medicare for All is just too “radical” for them. Joe Biden will support the health care status quo which benefits the interests of large insurance companies. Capitalists know this, hence the rise in health insurance stocks after Super Tuesday.

And even if Bernie had a better night and had higher chances of winning a plurality of the delegates coming into the Democratic National Convention, superdelegates were always likely to keep Sanders from the nomination. In fact, the leaders of the party already stated that they were willing to alienate their base in order to stop Sanders. As the New York Times reports, “Interviews with dozens of Democratic Party officials, including 93 superdelegates, found overwhelming opposition to handing Mr. Sanders the nomination if he fell short of a majority of delegates”— even if that alienated much of Sanders’ base and damaged the Democratic Party.”

The scales were always tipped against Bernie Sanders.

But even if Sanders were to win the nomination, confront the corporate interests lining up behind Donald Trump, and win the presidency, then what? With the Democratic and Republican Party in Congress opposing Medicare for All even now, how could he get it through?

I agree in part with what Bernie Sanders has had to say about this in the past: the answer is mobilize. However, though Sanders has conceded that passing M4A will require people in the streets, he hasn’t actually called for such mobilizations. But Congress won’t pass any progressive reform unless there is pressure from the working class — Congress won’t pass any progressive reform unless we fight for it. It certainly won’t take on the billion dollar insurance industry if we don’t mobilize. With the coming coronavirus epidemic likely to hit the United States, the issue of healthcare becomes even more urgent.

As a DSA member, I’m already getting emails that the response is to buckle down and canvass and phone bank more. Jacobin claims that “Bernie Sanders Can Still Win the Nomination and the Presidency.” Maybe that’s not out of the question. But what happened on Super Tuesday is just a small example of what can happen with the establishment lined up against Sanders. It’s just a taste of what the Democratic Party establishment will do to stop policies like Medicare for All. So let’s stop funneling our time and energy on this failed electoral strategy and this failed attempt to “use” the Democratic Party to build the project we actually want.

And for those of us who are socialists, the struggle is about building a world without exploitation, without oppression and imperialism. It’s about the end of private property and having all of society democratically run by the working class and oppressed. We deserve so much more than Medicare for All. We need to fight for socialism — which isn’t the new deal liberalism of Bernie Sanders. That’s why I (and all of the Left Voice editorial board) never supported Sanders: because we want to fight for socialism with an uncompromising anti-imperialist and anti-capitalist position — which Bernie Sanders doesn’t have (in fact, Sanders has supported the US imperialist machine). Our socialism must be rooted in the working class, building up our own, socialist working class party, not the corporate Democratic Party. It’s their party, and I don’t think it makes sense to spend our precious time and energy registering people for that very party. We have to build our own.

Now that Sanders is struggling in the polls, I think it’s the wrong reaction to just double down on the canvassing and door knocking for Bernie Sanders. Because this is about the fight for healthcare, for education and for the environment, not about Bernie Sanders. And we’ll need to fight in the streets against both the Democrats and Republicans, whether or not Bernie is the nominee in order to get any reform passed. And so, we need to begin that fight now. We need to use the energy of the millions of people who are inspired by Sanders’ policies to mobilize in the streets. We should mobilize for Medicare for All and the fight against climate change. We should call for a massive mobilization, all over the country, for the issues that most voters agree with: universal healthcare and free education.

Because even Bernie Sanders knows that elections aren’t the way to win reforms. I know that millions of his supporters know that that’s the case as well.  All of those unions who supported Sanders, who held massive rallies with tens of thousands of workers, must do more than endorse Medicare for All. It’s time to mobilize the working class. The DSA, whose members number over 55,000 people must move the fight to the streets.

And we’ll need our own, working class, socialist party to organize that fight and the many fights that are to come. We’ll need our own party that is actually on our side to organize the fight for reforms and the fight for socialism. This isn’t about being anti-electoral: this kind of party could and should run our own candidates. It’s about organizing among working class and oppressed  folks who can actually push the fight for socialism forward, not among our class enemies who are going to pull the rug out from under us at every chance they get.