Thousands of Protesters Across the Country Demand: “No War With Iran” and “US Out of the Middle East”

Thousands of people across the US protested a possible war with Iran. Here are some images from protests around the country. 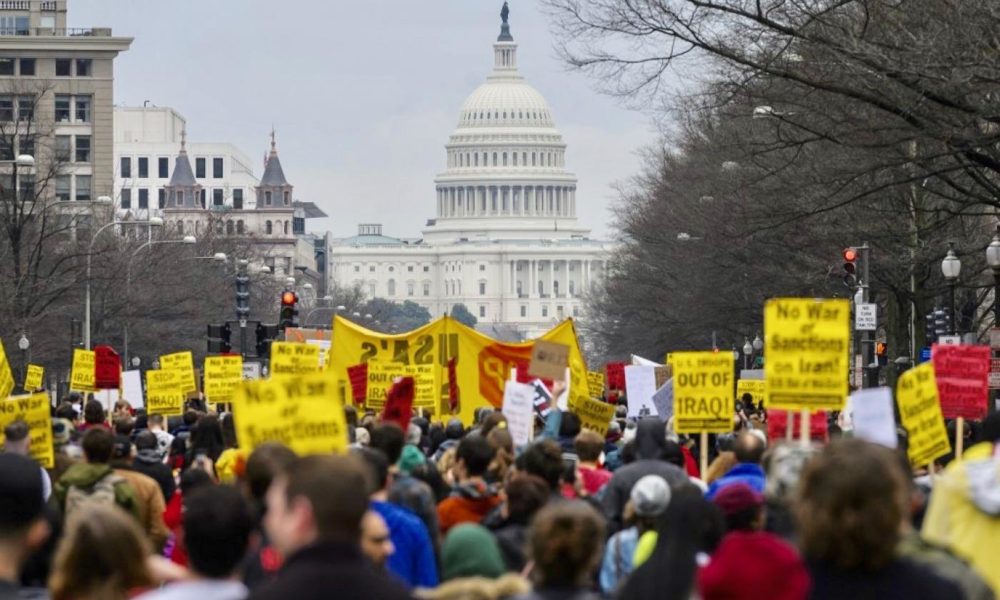 In more than 80 cities in the US, protesters repudiated the bombings perpetrated by the United States in Iraqi territory, which killed Iranian general General Qasem Soleimani. Across the political spectrum, this act is viewed as an act of war, possibly escalating into a full scale imperialist war against Iran.

Various different organizations came together to organize actions across the country on Friday and Saturday, including Middle Eastern, socialist and antiwar groups. They not only protested this new imperialist escalation in the Middle East, but also demand the withdrawal of U.S. troops in the region. There were also mobilizations in other countries around the world, particularly in the Middle East, including Iraq and Iran.

These rapid response protests brought out between a couple hundred to a few thousand protesters. They could be the roots of an anti-imperialist movement against military interventions because people know that US imperialism will only bring oppression, poverty and austerity to the people of the Middle East.

Below are some images of some of the protests in major US cities. 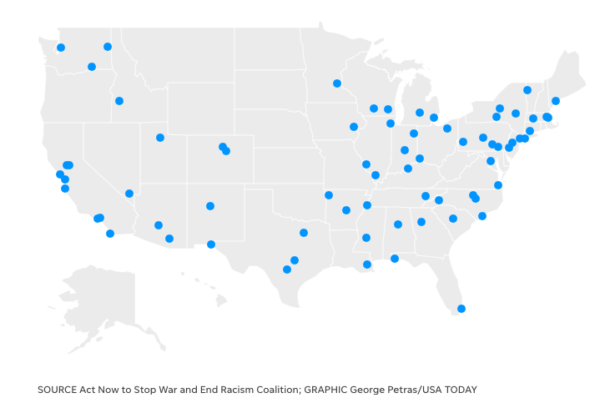 On Friday night, a smaller crowd gathered in front of Senator Chuck Schumer’s home in New York City. One protester said, “The Democrats have been fanning the flames of war. On this issue, I can’t tell a Democrat from a Republican, and I’m sick of all of them.”

Hundreds of people gathered in NYC on Friday night in front of Senator Chuck Schumer’s residence to protest the senator’s compliance with Trump’s acts of aggression in iran and to demand an end to US intervention in the Middle East. Likening Trump’s escalation of the conflict in Iran to Bush’s invasion of Iraq in 2003, protesters called for an end to the countless wars that prop up US imperialism and kill millions of working class and young people. Hands off Iran!

Hundreds of people gathered in Times Square on Saturday to protest the US strike on Iran and to protest the possibility of an escalated conflict. Protesters chanted “No justice, no peace. US out of the Middle East!” 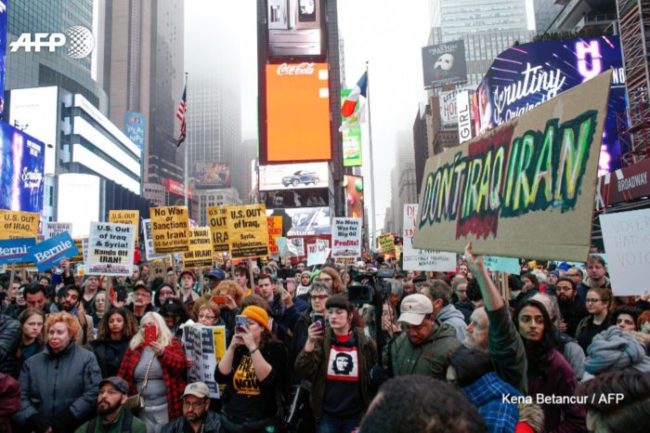 The streets of Chicago are packed full of anti-imperialists demanding no war with Iran and to withdraw all U.S. troops out of Iraq and the Middle East. #NoWarOnIran pic.twitter.com/iyuXCXjwqA

More than 1,000 demonstrators in Washington gathered outside the White House, carrying “No War” signs and chanting “No Justice, No Peace, US out of the Middle East.” The protest later went to the Trump International Hotel.

“Need a distraction? Start a war,” read the sign of a 66 year old protester. 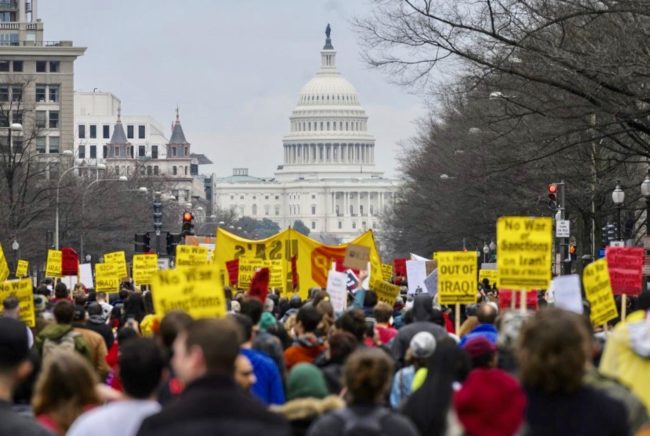 Over 300 people march through the streets of downtown Los Angeles chanting “They got money for wars but can’t feed the poor.” The march ended at the Federal building. Left Voice writer Julia Wallace spoke at the rally, calling on the working class and oppressed people to fight against imperialist wars, which are essential to capitalism. She called for working class and oppressed people to fight for socialism. 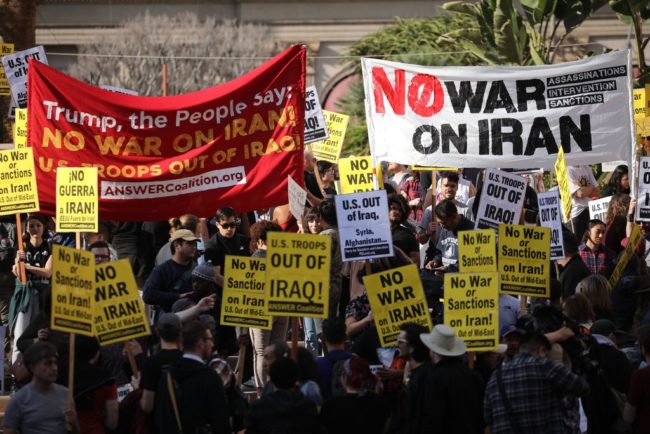 Thousands of people gathered in San Francisco at noon. They chanted, “Trump says more war, we say no more,” “The road to peace is US out of the Middle East,” and “Occupation is a crime, from Iraq to Palestine.” Even those who were not directly participating supported the protestors by honking and waving. 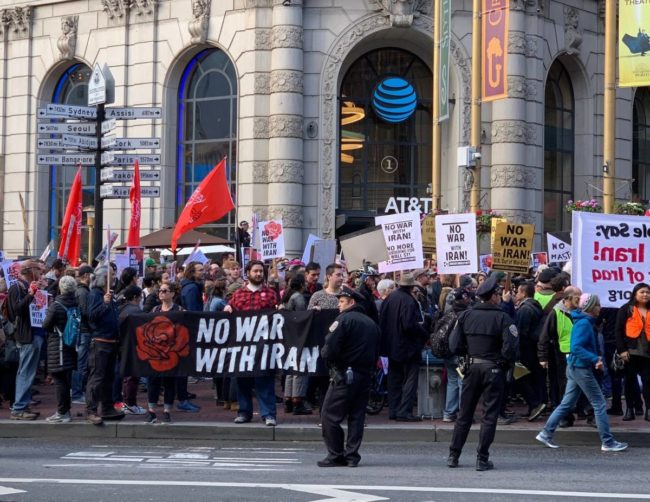 Over 500 people gathered at City Hall in Philadelphia. The action was endorsed by over 20 groups, including student groups from Temple and Drexel Universities and local organizations such as Black Alliance For Peace and Philly For Real Justice. Angel Nalubega, a resident of North Philadelphia, said, “We don’t need war. We need money for schools that have no heat or air conditioning, we have the opioid crisis…My little brother, who’s 13, asked me yesterday if he was going to be drafted.”

On Friday night, over 300 people gathered in Portland for a protest organized by the Democratic Socialists of America. “We don’t need to spill any more blood,” Portland DSA co-chair and protest organizer Olivia Katbi Smith said. She continued, “This is not about democracy, protecting Iraqi, Iranian, or American people. This is about money and power.”

Sarah Schneider, who is part of Never Again Action, said, “We’ve invaded other countries and created a situation that drives refugees over here. The reason we have a refugee crisis in the United States is imperialism and colonialism. I’m against both those things.”

Portland, Oregon has taken to the streets to say:

Despite the rain, 300 people protested in the streets of Boston. One sign read “Stop the Unified War Party.” Mojgan Haji, an Iranian-American, said that she worries about her  86-year-old father and other family members who live in Iran. But, she also said, “It’s not just about my family, it’s about people. It’s about people here. It’s about people in Iran…And nobody wins in this war except defense contractors.” 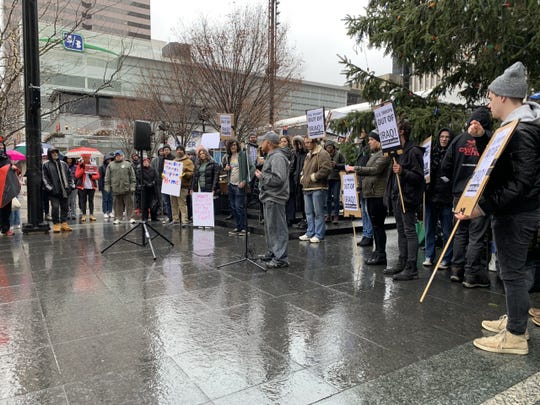 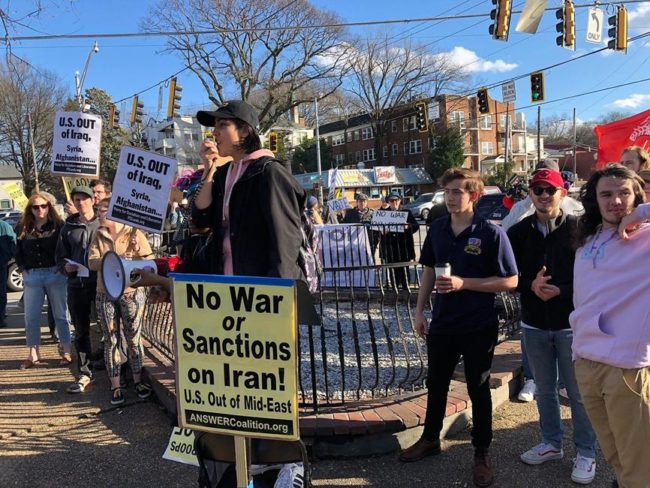