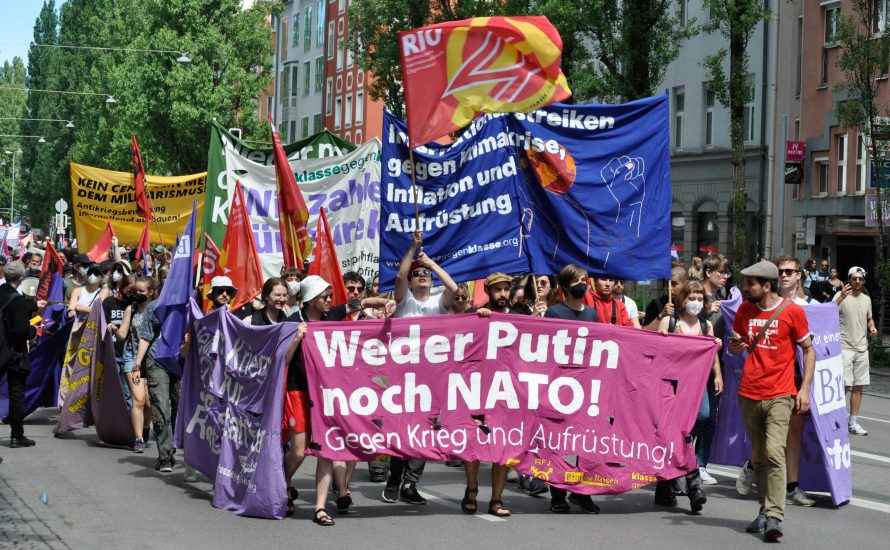 The Group of 7 is currently meeting in southern Germany. The leaders of the United States, the UK, France, Germany, Italy, Canada, and Japan — all men — are gathering in a castle in the Alps, close to the Austrian border. Schloss Elmau was already the location of Germany’s last G7 summit back in 2015.

These seven governments stand for vaccine imperialism, global warming, austerity, and militarism. At their summits, they like to offer empty promises about helping the world’s poor. For at least the last 20 years, they have drawn huge protests. When the G20 met in Hamburg in 2017, up to 100,000 people took to the streets. There were 70,000 people way back in 2007 when the G8 (which then still included Russia) took place at Heiligendamm.

This year was notably smaller — Russia’s totally reactionary invasion of Ukraine has led to growing support for militarism in Europe. On Saturday, the day before the summit, 6,000 people joined a demonstration in Munich, Germany’s third biggest city and the capital of the southern region of Bavaria. The protest had been organized by liberal NGOs like Greenpeace. They had planned for a demonstration of 20,000 people — but these NGOs ultimately did not mobilize their supporters at all. The left party DIE LINKE was completely absent, having set their party congress on the same weekend. It was mostly anticapitalist organizations from across Germany who joined the demonstration — leading to big contradictions between the speakers and the audience.

A speaker from Greenpeace, for example, called for further sanctions against Russia, which would supposedly help an energy transition. This is exactly what the German government is saying — but in reality, they are simply buying natural gas from Qatar and Israel instead. The group Campact was calling on the G7 governments to break with “neoliberal politics for the banks and corporations” — which sounded kind of like calling on a tiger to go vegan.

But if the speeches were nothing more than polite appeals to the mass murderers of the G7, the demonstration itself had a loud anticapitalist message.

A total of 30,000 police had been brought to Bavaria to “protect” the summit. On Saturday, there were 3,000 officers in bulky black uniforms surrounding the demonstration. They attacked numerous people. Dozens of Trotskyists from Klasse Gegen Klasse were all detained after the demonstration, without any legal justification, and were only allowed to leave after police had identified them.

On Sunday, there was a second demonstration in Garmisch-Partenkirchen, much closer to Schloss Elmau. This demonstration went through a picturesque mountain village beloved by tourists — the nearby protest camp was on a lovely meadow surrounded by mountains. Yet these idyllic scenes contrasted with the hordes of police who again surrounded demonstrators.

All this police violence shows the utter hypocrisy of these imperialist politicians, who claim to be fighting for “freedom” and “democracy” when they support Ukraine’s government. In reality, they are fighting for their own economic and military domination of the world. It is no surprise that a murderer like Putin was part of their exclusive club for so many years — the others are no less brutal.

The summit, and the protests, will continue tomorrow.

This article is based on reporting from our sister site Klasse Gegen Klasse.