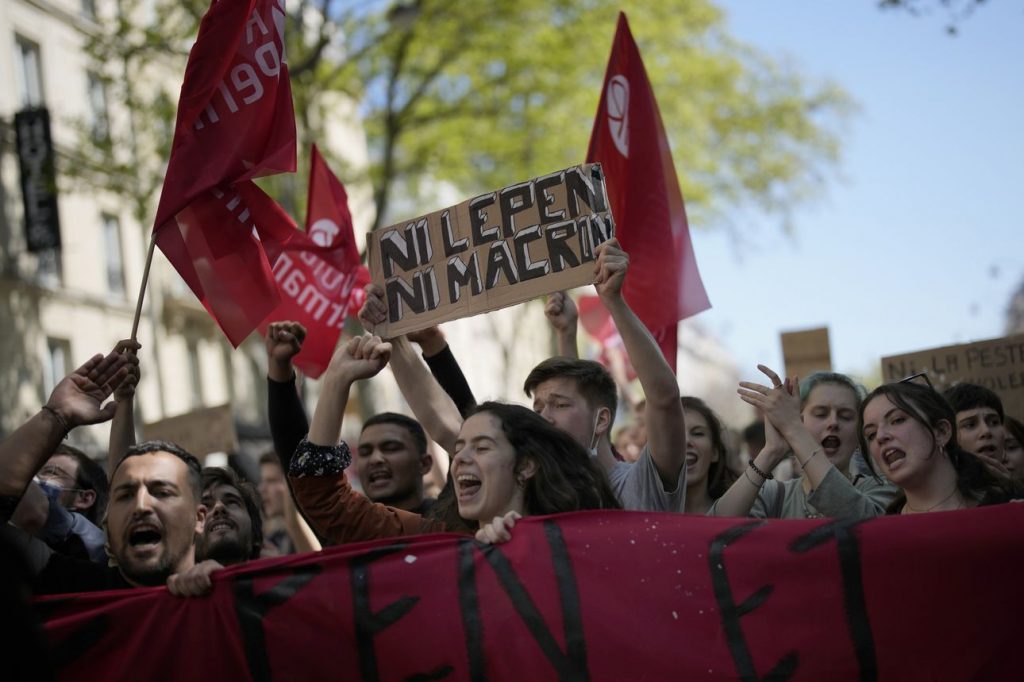 The second, and final, round of the French presidential elections will take place Sunday, April 24, pitting President Emmanuel Macron against Marine Le Pen, the Far Right candidate of the National Rally. It is a rematch of the final round in 2017. On April 16, in 30 cities across France, marches and rallies were held against the Far Right. In Paris, some 10,000 people took to the streets. Many of the protesters share the perspective of Révolution Permanente: “Neither Le Pen nor Macron!” — and are now building the postelection resistance.

Ariane, a student at University of Paris 1 and an activist with Poing Levé (Raised Fist), marched not only to protest the Far Right but also “to prepare the third social round, because we’ll have to fight whatever happens after this second round.” She drew attention to students at the Sorbonne who have occupied the university in response both to Le Pen’s making the second round and Macron’s presidency. “After five years of [his] neoliberal, Islamophobic, and authoritarian offensive,” she said, referring to Macron, “it’s clear that we can’t count on Macron to beat Le Pen.” She reminded us that “during the health crisis, students suffered the impact of the government’s antisocial policies and had to line up for food assistance.” She recalled the demonstrations against the new scheme for placing French high school students in universities and “the hunt for ‘leftist Islamists’ in the universities.”

She concluded that to fight Le Pen and the Far Right, “we must fight Macron!”

Ariane was one of more than 10,000 demonstrators who took to the Paris streets on April 16. There were lots of young people, including students from the Sorbonne occupation, refugee students from Ukraine engaged in the struggle for college registrations, as well as undocumented subcontractor workers from French delivery services who have been on strike for several months to win regular contracts. They are all on the front lines against the Far Right’s racist and antisocial policies.

“We’re Going to Be Under Attack Whatever the Outcome of the Second Round!”

The march was initiated in several French cities through a joint appeal — “‘No to the Far Right. For Justice and Equality!” — signed by the Human Rights League, the CGT trade union confederation, the Solidaires union, the FSU education workers union, and the UNEF national student union. The statement notes that the Far Right has achieved a vote total never before reached, points to “years of ultraliberal policies” as the culprit, and warns of the “urgency” to prevent Le Pen’s election as president. As one sign at the Paris march declared, “Better a vote that stinks than a vote that kills.”

But while all the demonstrators agree that the election of Le Pen would mean an increase in racist, Islamophobic, security, and antisocial attacks, many reject voting for the “lesser evil.” They call instead for building a response in the streets rather than lining up behind Macron in the second round.

“We’re going to be under attack whatever the outcome of the second round!” declared

Yassine Jioua, a machinist at a Paris public transit system bus depot and a CGT activist, said, “So we have to get organized. We haven’t forgotten the racist attacks the government has carried out, or the attacks on our working conditions.” She was referring to the laws on “separatism” and Global Security, as well as Macron’s efforts at pension reform and to change the French Labor Code.

Pchira, an activist in the struggle for papers for undocumented workers, agreed. “Five years of Macron has been really difficult for us. Our rights have been violated. This demonstration isn’t about voting instructions. It’s a call to be in the streets.” He echoed Yellow Vest leader Jérôme Rodrigues, who pointed out last week that Le Pen and Macron “do the same damage,” and declared, “Neither Le Pen nor Macron! The only candidate is the street!” The cops punctuated his words with searches in the Metro and brutal attacks on and arrests of demonstrators.

“We Must Build the Balance of Power in the Street!”

Anasse Kazib, who had been Révolution Permanente’s candidate for the French presidency, was also present at the Paris demonstration. He called out the many public figures and politicians from the Left who were absent. “We’re here to form a bloc against the Far Right that says Macron is not an alternative,” he said. “We must sound the alarm and establish the relationship of forces here, in the streets.”

Most of those who took to the streets on Saturday were young people. The unions were much less visible in the marches, except for the undocumented delivery service workers. Some of this resulted from faulty communication; after all, the call for the demonstration was made public only the day before. But above all it reflects the union leaderships’ unwillingness to mobilize the ranks, as the size of the union contingents showed. This cannot be separated from the lesser-evilism logic in the call for the demonstration itself, which the unions have adopted as part of “blocking the Far Right” on the terrain of the elections.

It’s a strategy challenged by the legitimate hatred of Macron and the experience of five years of his government’s antisocial and authoritarian policies. It makes the demonstrations between the first and second rounds of the elections to a purely symbolic role, disconnected from the task of preparing the resistance against the offensives to come. That should be one of the top priorities of the labor movement.

Jean-Luc Mélenchon’s La France Insoumise (LFI) party emerged from the first round as the main political force on the Left. Several of its flags were seen in the demonstration, thanks to the initiative of some of its grassroots activists. But it was a political choice that not a single LFI member of parliament or spokesperson participated. Manuel Bompard, LFI member of the European Parliament and a Mélenchon campaign coordinator, told Sud Radio on Friday, “Yes, of course, there will be a mobilization in the street. I understand and support it.” But, he added, “no one disputes” that the presidential election is taking place “under normal democratic conditions” and that “there is a third round — the legislative elections” on June 12. LFI’s strategy remains rooted in a purely institutional conception of the opposition to the next government, whether it is Macron or the Far Right, and totally circumvents building power in the streets.

At a moment when part of the working class is turning to the Far Right, either out of anti-Macron anger or because it has simply fallen into the trap of racism and xenophobia, it is essential that the organizations of the workers’ movement, of youth, and of the working-class neighborhoods denounce the poison spewed by Marine Le Pen, Eric Zemmour, and others, while at the same time rejecting the lesser evilism of voting for Macron and the heightened neoliberal offensive he promises us. Reject the institutions; we instead must build a bloc of resistance that will fight back in the streets and on the terrain of class struggle against these coming attacks, whatever the result of the second round.

First published in French on April 17 in Révolution Permanente. 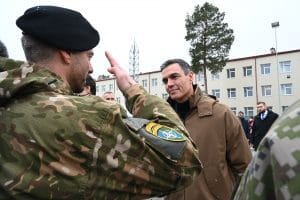