Three Hypotheses on the Assassination of the Russian Ambassador to Turkey 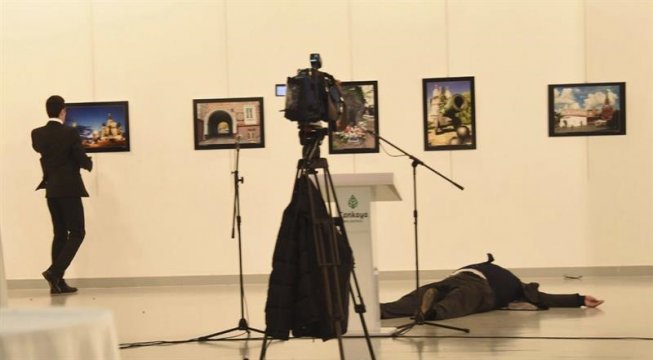 It is a known fact that Russia and Turkey are on opposite sides of the winding and shifting trenches of the Syrian civil war. Erdogan is backing several bands of “rebels,” which could have a significant degree of tolerance towards ISIS, particularly to contain the advance of Kurdish militias linked to the Kurdistan Workers’ Party.

Putin leads Bashar al Assad and is a member, along with Iran and Hezbollah, of the coalition that allowed the Syrian regime to survive and now, launch an offensive. The relationship between both countries hit rock bottom in November of 2015, when Turkey shot down a Russian aircraft. However, after the failed coup attempt against Erdogan in July, the Turkish President shifted towards the restoration of diplomatic relations between the two countries.In fact, the evacuation of Aleppo, particularly the armed opposition groups and their families that remained in the city, was the product of an agreement reached by Russia, Turkey and Iran.

The first, most obvious hypothesis is that the person who shot the Russian diplomat in the back was driven by the defeat of the opposition camp in Syria at the hands of a Russian-backed regime. Supporting this hypothesis is the fact that there have been recent protests in Istanbul against Putin, in solidarity with the population of Aleppo that is still trapped in the areas under control of the opposition and that is now at the mercy of Assad’s forces. According to the media, Karlov’s assassin had yelled about the situation in Syria and Aleppo.

Moreover, the timing is no coincidence: It occurred only a day before the meeting between Russia, Iran and Turkey seemingly with the intention of determining the fate of the different sides in the Syrian civil war.

But there are two other hypotheses related to Turkey’s domestic situation. One points at the organization of preacher Fetullah Gülen, accused by Erdogan of instigating the attempt to overthrow him. This hypothesis is supported by the fact that Andrei Karlov, the shooter, was a member of a special force of the Turkish National Police, which was heavily influenced by the Gülenist movement before the coup.

The other hypothesis points to Islamic terrorist groups, either because they could be seeking some kind of revenge against Russia for the situation in Syria, or also against the Turkish government that accepted the situation created in Aleppo following Assad’s advance.

The excuse of “terrorism” could serve as a cover-up for Russia and Assad’s brutal offensive in Syria. It could also be used by Erdogan to justify his fierce persecution of the Kurdish minority and especially its most radical political organizations. Both hypotheses are thus functional to strengthening Erdogan’s Bonapartist turn.

Trump’s upcoming inauguration as President probably accelerated the actions aimed at breaking the catastrophic impasse between the opposing sides in Syria. Although the outcome is still unclear, military gains ultimately boost the position of the winning side at the diplomatic bargaining table. And in this sense, Russia’s position has improved with the capture of Aleppo.

Trump’s policy towards Syria or, more precisely, the methods and alliances to be used by the US in combating ISIS are still unknown. The new US President seems to have reversed Obama’s terms by showing a greater willingness to negotiate a solution with Putin while increasing hostility towards Iran. This is in line with the upcoming Trump administration’s possible geopolitical stance of reducing hostility towards Russia – which has been US state policy in the past few years – and instead, to focus on China.

The uprising of the Syrian people against Assad’s dictatorship, which was part of the the “Arab Spring,” was ultimately stifled by the regime’s brutal repression and the actions of different factions armed by Western powers and regional actors – the United States, France, Russia, Iran, Saudi Arabia and Turkey, among others – battling against each other in a geopolitical labyrinth and reactionary civil war that in the past five years has led to a catastrophe of historic dimensions for the Syrian people. The destruction of Aleppo is perhaps the most horrific symbol, although not the last, of this tragedy.