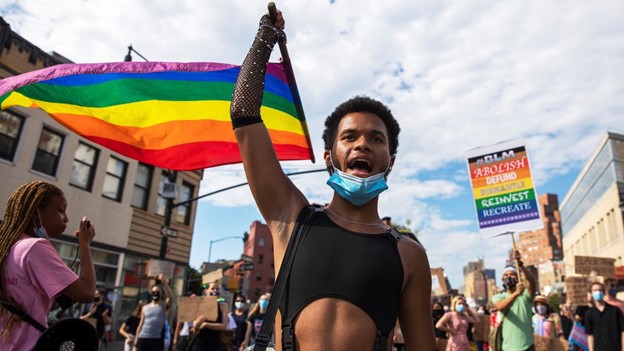 Attacks on trans people are continuing to become more prevalent and more vicious. Not only are there currently more than 150 bills making their way through state legislatures that specifically target trans people, but the far right, aligned with certain sectors of the feminist movement, are also becoming more and more explicit in their calls for a eugenics campaign against trans people, with the end goal of as few trans people in existence as possible. One Twitter user, echoing language used by Tucker Carlson, even called for a “post-Weimar cleanup” of “degenerates.”

One of the most horrifying examples is Ohio’s Sub HB 151, which House Republicans passed last minute on the first night of Pride Month. If the bill becomes law, any girl on a school athletics team who is “suspected” of being trans will be forced to undergo a genital examination, hormone level check, and genetic analysis. According to ABC Cleveland, the language of the law has no additional provisions: anyone can invoke this law on a student athlete for any reason. In the name of “protecting girls,” Republicans are trying to pass a law that will enable anyone to force a girl to choose between quitting her sport and undergoing a series of invasive — and expensive — procedures. Additionally, there are already several layers of restrictions on trans girls’ ability to play school sports in Ohio, and according to the Ohio High School Athletic Association, there is currently only one trans girl playing school sports in the entire state. The only thing this law accomplishes, outside of bullying a specific child, is further demonizing and fearmongering about trans girls and women while opening up new avenues for all girls in Ohio to be terrorized.

In addition to the ongoing legal attacks against trans people, eugenicist rhetoric is becoming increasingly mainstream, as we saw last week when a clip from a YouTube livestream circulated online of prominent UK transphobe Helen Joyce explicitly calling for “reducing or keeping down the number of people who transition” because “the fewer of those people there are, the better.” What’s significant about this statement is the fact that she said what many on the right believe so directly. In the remainder of the clip, she goes on to regurgitate eugenicist talking points that have been directed at disabled people and people of color since the word “eugenics” was first coined in 1883, such as the ideas that trans people are a burden on society, that “every one is a difficulty.” She also states that the time for “consciousness raising” for transphobic ideas is over, and now it’s time to focus on influencing politicians to use the power of the state to repress trans people in order to create a “sane world.” Using the power of the state to repress trans people, just as the right wing in the United States is enthusiastically doing now.

This instance of “saying the quiet part out loud” was paralleled last week by Representative Marjorie Taylor Greene, who posted a video saying Christian nationalism is the movement that will solve the country’s biggest problems, among which queerness is one. “This is the movement,” she says, “that stops the sexual immorality and teaches children and brings them up in traditional families…This will be the movement that protects kids’ innocence.” She also dismisses allegations of rightwing domestic terrorism as media lies and says that “if anybody is a domestic terrorists, it’s the radical Left…we could even say the Democrats are domestic terrorists.” Meanwhile, a day later, a group of self-described “Christian Fascists” invaded a family-friendly drag event in Dallas. Clips shared online show the fascist group shouting at children and their parents, making a wide variety of homophobic and transphobic statements, and threatening various forms of violence, including encouraging the police to begin shooting people because “that’s what the badge is for.” Conservative commentator Matt Walsh, who in recent years has been making a name for himself on the right by pedaling transphobia, recently added “theocratic fascist” to his Twitter bio — meant as an ironic joke, much as he also describes himself as a “women’s studies scholar,” but sincere bigotry disguised as irony has been a powerful vector for the transmission of far-right ideologies for decades.

Taken together, these examples of different forms of transphobia illustrate what is called stochastic terrorism. This term refers to a phenomenon in which one person/group/collection of groups spreads a particular ideology, which then gets taken up by different, unaffiliated individuals or groups who transform violent messaging into violent actions. The people who played a large role in spreading the ideas, such as politicians and media figures, are then able to avoid blame for the violence while still encouraging the attitudes that lead to massacres, like the recent shooting in Buffalo, or the attacks on Pride events. Anyone who participates in mainstreaming far-right rhetoric plays a role in creating this violence.

In turn, the attention drawn to the drag event by the far right’s attack inspired Texas Republicans to propose a new law that would ban drag queens from performing in front of minors, regardless of the content of their shows. Meanwhile, in Apex, North Carolina, the Chair of the Apex Festival Commission received two phone calls threatening him and his family if he did not cancel the Drag Queen Story Hour planned for the Apex Pride Festival last weekend. A town council member shared in a Facebook comment that other Apex Pride organizers had also been threatened. The event was reinstated after a statewide LGBTQ+ nonprofit got involved, but during the same weekend, a U-Haul of neo-Nazis headed to Pride was stopped in Idaho, and Proud Boys stormed another Drag Queen Story Hour, this one intended for preschoolers, in San Lorenzo, California.

In light of this trend toward violent escalation, some people are expressing hesitancy over attending Pride events this month. But gathering as a community in the face of threats like these is precisely what Pride is all about. It always bears repeating that Stonewall, and the Gay Liberation Movement that followed, was born in response to police attacks on the patrons of the Stonewall Inn, a bar that primarily served working class queer people of color. The people there that first night were actively being beaten and arrested when first one, and then another and then another, decided to fight back. Pride means showing up for our community, particularly for trans people, especially when the state and its unofficial agents are trying to oppress us.

In most places, Pride has become a collection of festivals and parades — celebratory, rather than combative. We need to return Pride to its roots as a protest, and organize ourselves to fight the Right. In New York City, the Reclaim Pride Coalition hosts an annual Queer Liberation March as a politicized and fighting alternative to the parade organized by the gay nonprofits. This year, the march is specifically dedicated to “Trans and BIPOC freedom,” and  “reproductive justice” in response to the most pressing political issues of our time. Queer people across the United States and the world should begin organizing events like this one, free of Democratic politicians, corporations, and police.

The Christian fascists in Texas wanted that event to stop, and for events like it to never exist again. If they can’t stop us from existing, they at least want us to be invisible — but they do want to stop us from existing. Pride is about saying “No” to people like that. Pride is about saying “Fuck you” to everyone who wants us gone. Pride is not just about feeling proud of who we are, but standing up to the people who want us to feel ashamed. For every blow against us, for every homophobic and transphobic law, every bigoted comment, every threat from a far right mob, we must turn out in ever-greater numbers. For our queer ancestors, for each other, and for the generations to come.