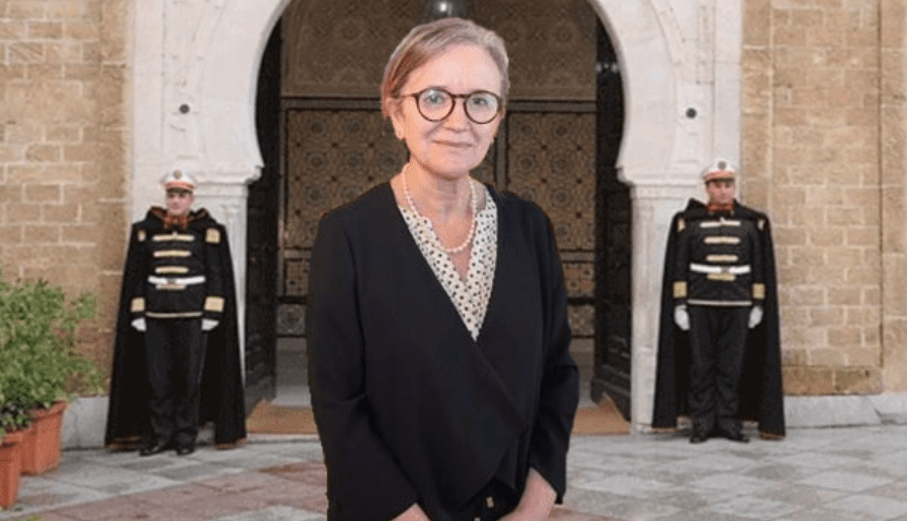 On September 29, Tunisian president Kaies Saied appointed Najla Bouden Romdhane as the head of government, making her the first woman prime minister in the history of Tunisia and the Arab world.

The appointment comes in the middle of an authoritarian power grab by the president. Since Tunisia’s Republic Day on July 25, Saied has been working to dismantle the country’s already hollow democratic institutions, citing a national emergency due to political paralysis, high Covid-19 rates, and protests.

In July, he suspended the country’s parliament, rescinded the immunity of all parliament members (many of whom were charged with corruption), and dismissed Prime Minister Hicham Mechichi. Under a decree enacted in September, Saied has suspended most of the constitution and parliament, in addition to taking over legislative and judiciary powers.

Since the coup, Saied has faced increasing international pressure from the G7 countries. These countries, of which France is one of the most prominent, give “developmental aid” to Tunisia in the name of promoting “democracy,” but in reality do so to maintain imperialist domination. This bloc of countries has forced Saied to appoint a new head of government.

Newly appointed and largely politically unknown Romdhane will now be tasked with pulling together a government under a president with far-reaching and nearly unlimited powers.

Who is Najla Bouden Romdhane?

Romdhane is a relatively unknown figure, with no prior experience in politics. Born in 1958 in Kairouan, she is an engineer and a professor of higher education at the National School of Engineers of Tunis, specializing in geosciences. In 2011, she became the Director-General of Quality in the Ministry of Higher Education and Scientific Research. In 2015, she held the position of Project Manager in the office of Minister Salim Shoura.

Since September 2016, she held a senior position in the Ministry of Higher Education, where she was responsible for implementing World Bank policies and programs. The Tunisian Youth Economic Inclusion Project, overseen by Romdhane, was a $73 million project with the aim of improving the employability of Tunisians with university degrees under World Bank supervision and funding. To date, there are no reports documenting the results of this project.

In fact, the country’s unemployment rate is higher than ever, having risen to nearly 18 percent. Tunisia’s debt has skyrocketed in the past two years, with a rate hovering around 91 percent of the country’s GDP. This is the result of Tunisian capitalism in crisis, with the most vulnerable members of the working class taking the hardest hit.

On September 29, President Kais Saied assigned Romdhane to form and head the new government in the midst of a coup. Romdhane’s appointment signals a clear continuation of the neoliberal agenda of the Tunisian government and its imperialist backers.

The disappointing aftermath of the Jasmine Revolution in 2011 subjected Tunisians to an accumulation of corruption and absence of economic opportunity, leading to a bitter hatred of the political elite, embodied by the former ruling party Ennahdha. In line with the global rise in populism since the election of Trump in 2016 and Bolsonaro in 2019, Kais Saied stepped into the political arena as a political outsider, running as a conservative, anti-corruption candidate.

With increasingly precarious conditions for working class Tunisians in the face of the feeble and woefully insufficient government response to the pandemic as well as worsening economic prospects, protests erupted across multiple cities in July. They targeted Ennahdha (or “Renaissance Movement Party”), the bourgeois Islamist ruling party that emerged after the 2011 uprisings. The party has since ruled with a “Islamic democratic” face and a neoliberal agenda.

With a political phenomenon unfolding that had the potential to challenge capitalist stability, Kais Saied has capitalized upon the discontent of the Tunisian working class and poor at the corruption of the previous ruling party to prevent an uprising and consolidate power.

While some celebrate the empty progress of appointing a woman to the void position of prime minister, many Tunisians see through the farce of tokenizing Romdhane as a distraction from an increasingly authoritarian political landscape. Last week, hundreds of Tunisians, including Tunisian General Labour Union (UGTT), the country’s most influential labor union, took to the streets to denounce the coup and demand Saied’s resignation.

On Sunday, a large protest in the capital drew thousands in support of Saied and against Ennahdha. During the July power grab, Saied imprisoned and placed many Ennahdha deputies under house arrest.

The international response to Romdhane’s appointment is a testament to it being a perpetuation of the established order. On Thursday, the Egyptian Foreign Ministry congratulated Tunisia on its new prime minister and delivered a message from Sisi, thanking Saied for stabilizing the country and “responding to the will of the people”.

Don’t be fooled. Saied uses populist rhetoric to conceal his reactionary and anti-working class agenda. Whether supported by the Tunisian public or not, Saied should not be seen as the answer to the country’s problems. Recent arrests ordered by the military judiciary that targeted a member of parliament and a television host who critiqued the president clearly demonstrate that the president is far from the solution that the Tunisian public seeks.

The working class, the youth, and the poor of Tunisia must not put their faith in corrupt bourgeois political parties like Ennahdha, nor a populist authoritarian like Saied disguising his coup with representation politics.

A decade after the Arab Spring, many of the structural crises that had given birth to popular revolts remain and have been perpetuated by the political caste who crushed the uprisings to consolidate political power. But history also showed a small glimpse of what is possible, and a spark that’s being lit by current strikes and protests: that the way to challenge the regime is with the full power of the working class, and with the solidarity of the workers around the globe.