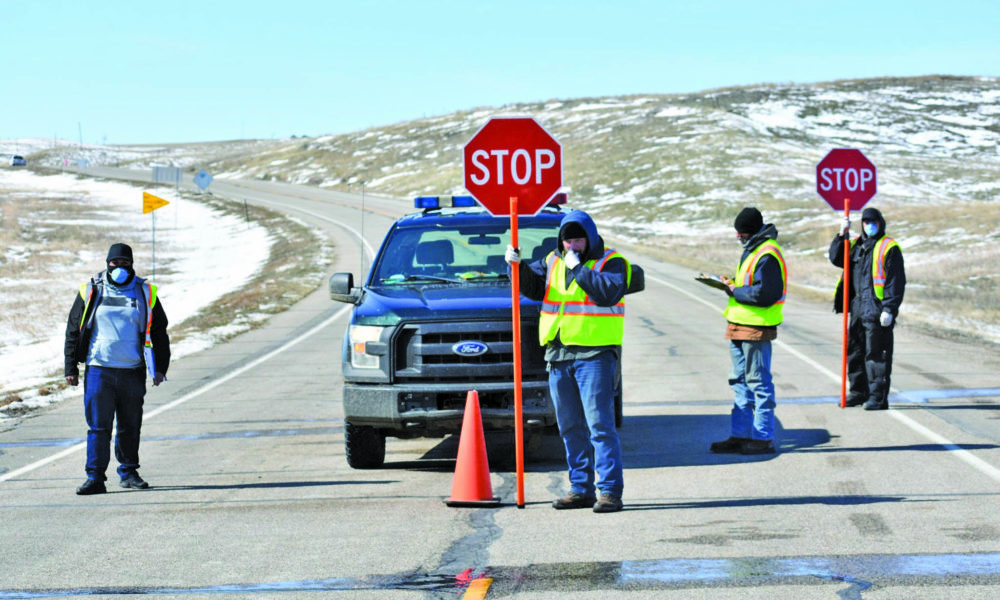 Since the beginning of April, the Cheyenne River Sioux and Oglala Sioux tribes of South Dakota have set up checkpoints along major roads and highways that lead onto their reservations. Harold Frazier, Chairman of the Cheyenne River Sioux, said in an interview with Democracy Now! that the checkpoints serve a twofold purpose: keeping the virus out and tracking it if it gets in. The tribes are trying to aggressively implement contact tracing, which is recommended as a vital element of stemming the spread of the coronavirus by the CDC. Throughout the world, contact tracing has proven vital in significantly limiting the number of infected individuals and deaths from coronavirus.

In the interview, Chairman Frazier referenced their “relatives to the south,” the Navajo Nation, which has been hit particularly hard by the coronavirus. The Navajo Nation has the third highest rate of coronavirus in the United States, behind only New York and New Jersey. The U.S. has repeatedly violated its treaty obligations by failing to adequately fund healthcare, education, housing, economic development, and agricultural assistance for tribal nations. This is glaringly apparent on the Cheyenne River Sioux Tribe’s reservation where there are only eight hospital beds and no ICU units. The nearest critical care facility is a three-hour drive away.

On May 8, Governor Kristi Noem of South Dakota, sent a letter to the Cheyenne River Sioux and Oglala Sioux demanding that the checkpoints be removed or the tribes would face legal action. At the tribes’ refusal, Noem later amended her statement saying that she would be willing to work with the tribes and allow for checkpoints on tribally owned roads so long as they were removed from U.S. and State highways.

Noem is among eight governors who have refused to issue a statewide stay-at-home order. With examples like New Mexico, where about half of those who have died from the coronavirus are Native American, although accounting for only 11% of the population, president of the Oglala Sioux Tribe, Julian Bear Runner, has made it clear that the tribes “have no choice but to take matters into their own hands.” Both tribes have issued strict stay-at-home orders and curfews for their communities.

The Cheyenne River Sioux Tribe has still not received allotted funds from the CARES Act, which was passed over seven weeks ago, although other states, townships, and municipalities have already received their funds. The funds were slated to arrive by April 24. These funds are to allow the tribes to purchase the necessary materials they need to combat the pandemic.

In her initial letter, Gov. Noem wrote “we are strongest when we work together; this includes our battle against Covid-19.” However, for weeks the tribes had been requesting assistance on obtaining necessary PPE and building more hospital beds on the reservations. These requests were met with silence from the governor.

In a statement addressing a plan for the coronavirus crisis, Gov. Noem said the state wants to put the “power of decision-making into the hands of the people — where it belongs.” However, when Native Americans choose to protect public health on their sovereign territory and exercise their own authority, threatening the authority of the state, Gov. Noem suddenly reneges on her statements of “power to the people.”

The U.S. capitalist state has proven time and again since the inception of this nation, that it views the lives of Native Americans as disposable and as obstacles. Lands and sovereignty of tribal nations are still being encroached upon by the U.S. government to this day. We have seen this as recently as April when the U.S. government announced a move that would eliminate the Mashpee Wampanoag tribe’s jurisdiction over their own land. The case of the Oglala Sioux and Cheyenne River Sioux tribes is a clear maneuver to strip them of their sovereignty. But they have demonstrated that they won’t back down from a state which clearly does not intend to protect their health and safety. As President Bear Runner stated in a Facebook live video, the tribes are willing to do whatever it takes to “protect our most vulnerable people from crony capitalism.”