U.S. Imperialism Is Blocking Venezuela from Receiving Fuel from Iran in the Middle of a Crisis

Venezuela is facing a brutal shortage of gasoline, but the U.S. is threatening to block badly needed shipments of oil from Iran. Venezuela has every right to market or receive gasoline from whomever it deems necessary — not whatever is determined by a foreign imperialist power. 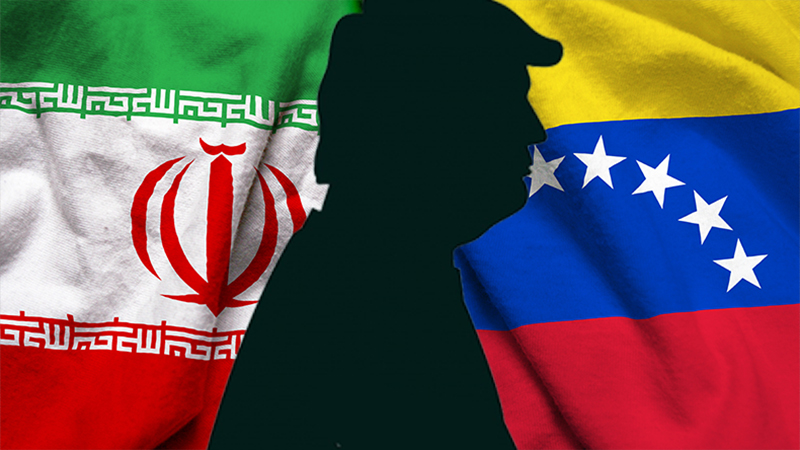 In the midst of a severe gasoline shortage in Venezuela, the Maduro government recently turned to Iran to alleviate its growing crisis. Five oil tankers (Fortune, Forest, Petunia, Faxon and Clavel) carrying  at least 1.4 million barrels of gasoline have set sail from Iran, but the U.S. is threatening to block these shipments. They left at the end of April and last week crossed the Suez Canal to reach the Mediterranean Sea. The first of these tankers could reach Venezuelan ports this week, but the imperialist sanctions and threats already made by the U.S. are jeopardizing the arrival of the Iranian ships.

Venezuela is facing a brutal shortage of gasoline, affecting even the operation of agricultural production and the transport of food from the countryside to markets. For about two months, distribution has been severely restricted to vehicles belonging to sectors considered to be essential (food, health, production, firemen, security forces, etc.). As a result, distribution is controlled by mafias and illegal businesses, which are controlled by the military and charge Venezuelans in dollars to fill up their tanks. Due to the inaccessibility of gasoline, there has been an uptick in deaths among sick people who could not get access to care because of a lack of fuel for vehicles.

In the midst of an economic collapse under Maduro, deepened by U.S. sanctions, the country desperately needs to import both diesel and gasoline, as well as supplies like diluent needed to produce these fuels locally. Venezuela, of course, produces crude oil and derivatives, but its infrastructure has been paralyzed during the economic crisis.

The fuel industry had been in decline prior to the sanctions because of the decline in refining in Venezuela, which has a total capacity of 1.3 million barrels per day (bpd) of crude processing. The country’s main refineries are in crisis precisely because of the lack of timely and adequate investment into its infrastructure. This situation is driven by Maduro’s policies, which have  prioritized foreign debt payments to international creditors when those funds were needed to shore up an industry that was already predicting a drop in revenue after a global drop in oil prices in early 2014.

The current crisis has drastically brought to the surface the unnecessary amount of debt accumulated under Chávez by the Venezuelan state-owned oil company PDVSA. As the state-owned company accumulated its debt, an estimated $500 billion dollars of state funds were transferred to foreign accounts owned by Venezuelan businessmen and bankers. These funds, along with other resources, could have been used to prevent the accumulation of debt in the public oil industry and could have been used to maintain productive infrastructure that is badly degraded today.

United States’ imperialist policy, which includes crippling sanctions to force Maduro out, has been brutally imposed onto the masses and exacerbates their suffering. Now, Donald Trump has decided to instill a “maximum pressure” campaign to strike even harder in the midst of the pandemic, thus intensifying the siege to further strangle the already collapsed economy of the country.

The imperialist sanctions, especially those focused on the oil sector and PDVSA, have aggravated and made the current situation more pressing. The most severe of the sanctions was imposed by the United States in January of last year and involves an oil embargo which is unprecedented for Venezuela. In addition, the sanctions prohibit the export to Venezuela of diluents used by PDVSA in the processing of heavy and extra-heavy crude, and limit the trade of PDVSA bonds. Likewise, oil derivatives such as light gasoline cannot be exported or imported from the United States. The U.S. also sanctions any company or country that trades with Venezuela. In the midst of the pandemic, the Trump government is seeking to prevent the country from having access to precious fuel.

Because of the sanctions, Venezuela is unable to buy gasoline abroad. Since the country has a hard time finding a buyer for its oil, it also has a very difficult time finding a country that will sell it gasoline. Hence it has entered into agreements with Iran, another country sanctioned by the United States. Previously, Venezuela had managed to evade the impact of these sanctions through trade with India, but that path was also blocked by imperialist pressure.

In the midst of the coronavirus pandemic, Venezuela is considered by the Pan American Health Organization to be one of the potentially most vulnerable in the region. Workers in medical centers and hospitals report that it is almost impossible for them to get to work without gasoline and restrictions on public transportation, both because of quarantine and the fuel crisis itself.

But another major crisis revolves around dwindling food supplies. According to the United Nations World Food Program, a third of the Venezuelan population were experiencing food insecurity even before the pandemic. With the gasoline shortage, the transport of food has been jeopardized. At the same time, everything involved with agricultural production, like irrigation, fumigation, among many other things, relies on gasoline or diesel.

The Paraguaná Refining Complex , the largest and most important refinery in the country and the continent, is practically paralyzed. Decades ago, the refinery was the largest in the world, since it has the capacity to process up to 645,000 barrels of crude oil per day. By comparison, the Punta Cardón refinery can only produce up to 310,000 barrels. Last month,  Iran sent parts to assist in repairs at the Cardón facilities, but just at the beginning of May there was an accident that resulted in four workers suffering burns as they attempted to fix the refinery.

According to Reuters, a senior U.S. administration official reportedly said that the U.S. was considering what action to take in response to Iran’s fuel shipment to Venezuela. “It is not only unwelcome by the United States but it’s unwelcome by the region, and we’re looking at measures that can be taken,” the anonymous official said.

The Trump administration official did not specify the measures being considered but said that the options would be presented to Trump. The White House was said to be evaluating possible actions to “punish Iran” for helping Venezuela.

Thus, it is not clear what concrete measures the U.S. government will take. The head of the Southern Command, Admiral Craig Faller, said that they are watching Iran’s support “for the Maduro regime” and that he has seen reports “that tanks are on their way” to Venezuela with oil.

In early April, Faller deployed “navy destroyers, combat ships, aircraft, and helicopters; Coast Guard cutters; and Air Force surveillance aircraft, doubling our capabilities in the region.” Some media outlets assessed the deployment as one of the largest U.S. military operations in the region since the 1988 invasion of Panama.

On the Iranian side, representative Mahdi Mohammadi invoked Iran’s seizure of a British-flagged tanker in the Persian Gulf  last year after British forces detained an Iranian tanker outside the territory of Gibraltar. Both ships were released after a diplomatic standoff lasting months.

“Before coming to any decision, Trump should ask his friend (British Prime Minister) Boris Johnson about the details of the British tanker experience,” Mahdi Mohammadi said.

It is worth remembering that this new episode of tension between the U.S. and Iran was preceded by the unprecedented aggression by U.S. imperialism at the beginning of the year after the highest-ranking Iranian military official, General Qasem Soleimani, was murdered in Iraqi territory.

Juan Guaidó and the right-wing opposition in Venezuela are servile to the U.S. and against the Venezuelan people. The politics of this right-wing opposition and Washington’s puppets are criminal. They continue to support all the sanctions that the U.S. has imposed on the country, even in these times of the coronavirus pandemic, are are therefore complicit in this criminal policy. This exposes their demagogy when calling for “humanitarian aid.”

Gustavo Marcano, Guaidó appointee, who serves as the Minister Counselor of the Venezuelan embassy to the U.S., declared that the entry of the ships is illegal and must be approved by the National Assembly, which, of course, would not approve them. This Guaidó official has also requested help to prevent the entry of these tankers into the country —- one more sign that lays bare the perverse face of the right wing that could care less about the situation of the people and the lack of food.

As Angel Arias, leader of the LTS, has said about the sanctions, “The Trump government, showing the rottenness of imperialism, not only maintains but also deepens its aggressions and sanctions, worsening, among other things, the severe fuel crisis, which affects the production and distribution of food. And together with the right-wing opposition, the lackeys, they come after us to talk about humanitarian aid’! All with the aim of imposing in Caracas a puppet government of Washington (…) a criminal policy, which with the most miserable imperialist impudence, recognizes that its objective is to end up strangling the Venezuelan economy and deepening the hardships of the people, in order to force the conditions for a regime change tailored to the United States.”

It is an elementary right of sovereignty that no imperialist power should come to decide with whom to have commercial relations or not. The U.S. is doing just that with the audacity and arrogance of its Navy and the Fourth Fleet in the Caribbean.

That is why we say that one of the first urgent measures in view of the lack of gasoline is the immediate demand for the lifting of the sanctions against Venezuela. If before this emergency these imperialist actions were repugnant, today they are repugnant to an extreme degree. In the midst of the pandemic and the humanitarian crisis generated by it, we must fight for the immediate abolition of the sanctions.. Sanctions that punish the Venezuelan people, who have already been suffering a great calamity resulting from the economic disaster, are now on the verge of extreme suffering if agricultural and food production as well as the transportation of goods continues to be paralyzed, threatening a real famine.

Along with this measure, we, the workers, must demand the complete centralization of the entire oil and fuel industry as public property and under the control of the workers, not of this corrupt, incapable, anti-worker and authoritarian civil-military bureaucracy, which is primarily responsible for the current disaster in the industry because it privileges its own private interests over those of the people. We support a public oil industry in Venezuela under the control of the workers, with the participation of the communities, that will reorganize  the oil production and refining according to the urgent needs of the majority of the population.

First published in Spanish on May 20 in La Izquierda Diario.