Monday, May 7th through Wednesday, May 9th, service workers and patient care providers at the University of California are striking after the UC administration failed to agree to a fair contract. 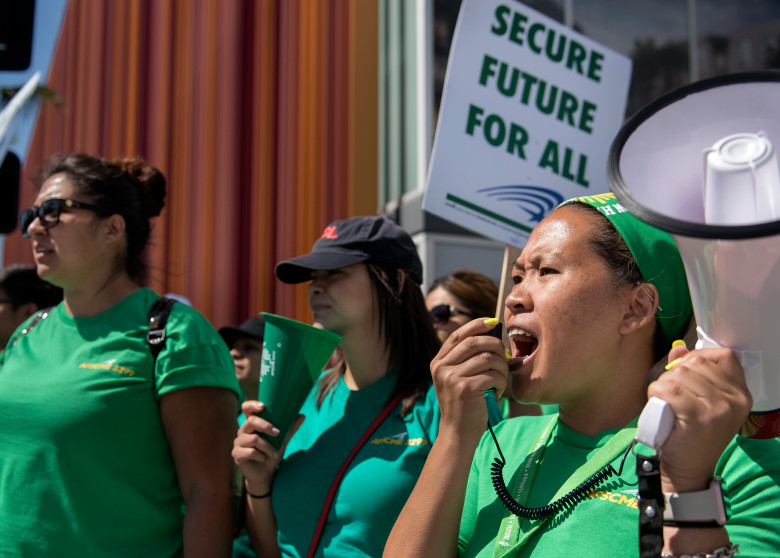 Monday, May 7th through Wednesday, May 9th, service workers and patient care providers at the University of California are striking after the UC administration failed to agree to a fair contract. These workers are represented by the American Federation of State County and Municipal Employees, Local 3299 (AFSCME 3299). Sympathy strikes from workers in the California Nurses Association (CNA) union and the University Professional and Technical Employees (UPTE) Union mean that over 50,000 UC workers are striking statewide. Within AFSCME, the strike vote was approved with ninety-seven percent in favor.

This strike comes after a year of fruitless negotiations between AFSCME and the university administration. The University’s latest contract offer would eliminate step increases and provide a mere 2% increase in wages across the board, which workers argue would amount to nothing with the elimination of step increases. Instead, AFSCME is pushing for a 6% increase in wages across the board, as well as maintaining current healthcare costs and ensuring job security.

Beyond numbers, the workers’ demands are fundamentally about justice, respect, and equality. A central theme of their media campaigns has been to highlight the sexist and racist discrimination suffered by service workers at the hands of the UC administration. For instance, on average a Black woman employed by the UC needs to work six years before earning what her white male peer would earn as a starting salary. In addition to highlighting these disparities amongst low-wage workers, AFSCME is also demanding non-collaboration with Immigration and Customs Enforcement (ICE), stronger protections against sexual harassment, and a halt to the UC contracting out their labor in order to pay non-unionized employees less and pit workers against each other.

Sonia Rodriguez, a phlebotomist at the UC Santa Barbara Student Health Center and dedicated AFSCME worker explains, “We’re striking for gender and racial equality. We want the UC to see that we’re all united and we all want the same thing; we just want to be equal.” She further points out that “Latino workers get 21% less than their white counterparts, and African-American workers get 20% less. Women workers get $2 less an hour, on average, than their male counterparts.”

This strike is already making waves across the state of California. Monday morning at UC Santa Cruz saw classes cancelled due to strike activity blocking both main gates. AFSCME has called for commencement speakers to boycott UC graduation ceremonies, which Sen. Kamala Harris has now officially done, announcing her decision to pull out of speaking at UC Berkeley on Monday afternoon. And of course, most importantly, the material effects of the strike are being felt across the UC system. Appointments and surgeries have been rescheduled in student health departments, mail service has been halted on some campuses, dining halls have scaled back and modified hours, and on campuses where transportation workers are among those striking, bus service has been altered. The UC is scrambling to replace workers’ labor with temporary and student workers. While many AFSCME workers may normally perform what many UC students and visitors treat as invisible labor, the absence of that labor is glaring across all campuses, emphasizing the true power of a strike and the true power of workers.

This strike comes in a particularly exciting time in the United States, when workers in education have been at the front lines of the labor movement across the country — from West Virginia to Oklahoma to Arizona Teachers have been at the center of many of these fights, along with adjuncts at public universities. However, as we have seen recently with the cafeteria workers’ occupation of the New School in New York City, our systems of education are not just run by teachers’ labor alone. Together with teachers, millions of service workers make it possible for students of all ages to receive an education and the labor of each and every one of these workers needs to be valued as such. Additionally, the workers on strike at the University of California and everywhere have invaluable lessons for students about the importance of solidarity and workers’ power.