On Thursday, the National Union of Metalworkers of South Africa (NUMSA) called off a major strike of at least 155,000 workers just as it was starting to gain momentum and was about to strike a major blow against the capitalists’ assault on the workers. 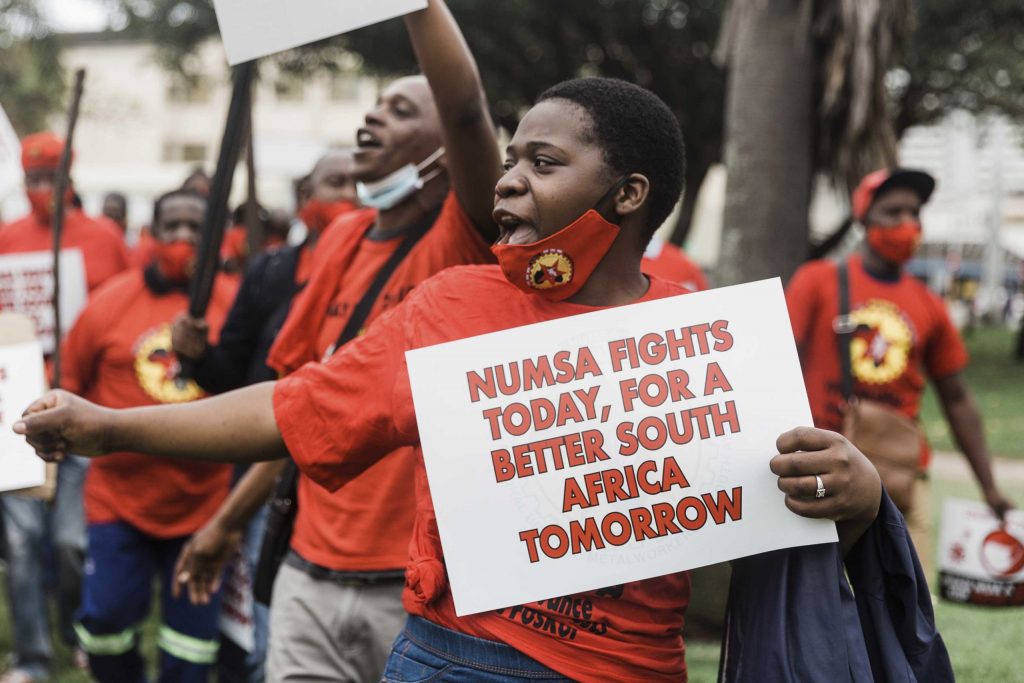 On Thursday, the National Union of Metalworkers of South Africa (NUMSA) called off a major strike of 155,000 workers. Workers are anticipated to return to work Monday after NUMSA accepted a three-year wage offer from the Steel and Engineering Industries Federation of Southern Africa (SEIFSA), an employer association representing bosses in the metals and engineering industries.

Since October 5, metal workers have been on strike demanding higher pay, in an action that has blocked the supply chain of parts for cars and accessories manufactured in South Africa. Throughout the course of the strike, workers were shot at by police and private security guards. Earlier in the month, a smaller union, 16,000 members of the Metal and Electrical Workers Union of South Africa (MEWUSA) in the sector had also joined picket lines. Collectively, the strike has cost NUMSA members some 300 million rand ($20.5 million) in lost wages.

Compelled by union leadership to accept a paltry deal, the striking workers with the most to lose are now expected to return to work on Monday, while union and corporate leadership can celebrate “a strong partnership … between business and labour,” as SEIFSA CEO Lucio Trentini said in a press release.

The union previously rejected an even lower wage offer, but the current deal is still significantly below the original demand for an 8-percent wage increase across the board in the first year of the contract, and an increase equal to the rate of inflation plus 2 percent in the subsequent two years. South Africa’s annual inflation is currently around 5 percent.

Though the workers’ original demands included a sliding scale of wages based on inflation, the deal reached by NUMSA includes only fixed rates. If the trend of South Africa’s inflation rates continues upward, workers will surely see their real wages fall.

No wonder the bosses, through SEIFSA, are calling it a “landmark agreement” and are celebrating the workers’ return without having to concede wage increases that would be subject to the fluctuations of the economy.

A press conference with the NUMSA general secretary on Thursday was filled with revolutionary rhetoric, disguising the union bureaucracy’s cynicism and betrayal of the strikers. Despite having already rejected the same offer just days before, Jim announced, “We decided to accept the current 6 percent on minimum despite our clear demand that it must be given on actual rates. We have taken a conscious decision that as a union we will compromise and accept the current offer from SEIFSA.”

While Jim railed against the exploitation by the bosses, it’s clear the interests of the union leadership and the capitalists are closely aligned. South Africa’s president Cyril Ramaphosa, a billionaire businessman, was formerly the leader of the National Union of Mineworkers (NUM).

The strike caused major problems for the auto manufacturing sector in South Africa, which has been slow to recover from the economic impacts of the ongoing Covid crisis. According to the CEO of SEIFSA, Lucio Trentini, affected companies lost 600 million rand ($41 million) due to the strike. BMW’s main vehicle assembly plant in South Africa lost the production of around 700 vehicles.

The auto industry accounts for 5 percent of South Africa’s GDP, and overall the steel and metal industries account for 8 percent.

Just as the strike was starting to have a real impact on capitalist profits, the union leadership capitulated and agreed to less than what the metal workers had demanded. Now, the capitalists are able to avert a potential crisis that would have put real pressure to accept the workers’ demands.

As global economies recover from pandemic-related losses, the capitalists continue to rake in profit off the backs of workers, who have kept production going throughout the crisis. Workers across the globe are once again recognizing their strategic position in the capitalist chain of production, and demanding higher wages and better working conditions. These strikes in South Africa are connected to a global wave of class struggle that is beginning to rise. In the United States, strikes in a multitude of industries have been reigniting the labor struggle and showing the potential of the working class; just a few days ago, half a million workers in South Korea took part in a one-day general strike. Workers are demanding an end to backbreaking working conditions, scant protections, interminable hours, and poverty-scale pay.

Workers cannot rely on the union bureaucracy to fight to the end for their demands, as the capitulation by the NUMSA leadership illustrates. But that does not mean workers should lose hope, or that there is no other path forward. The rank and file has shown its drive to continue the fight without capitulating. What unions need — from Lancaster, Pennsylvania, where Kellogg workers are striking, to Johannesburg — is rank-and-file leadership and genuine union and workplace democracy.