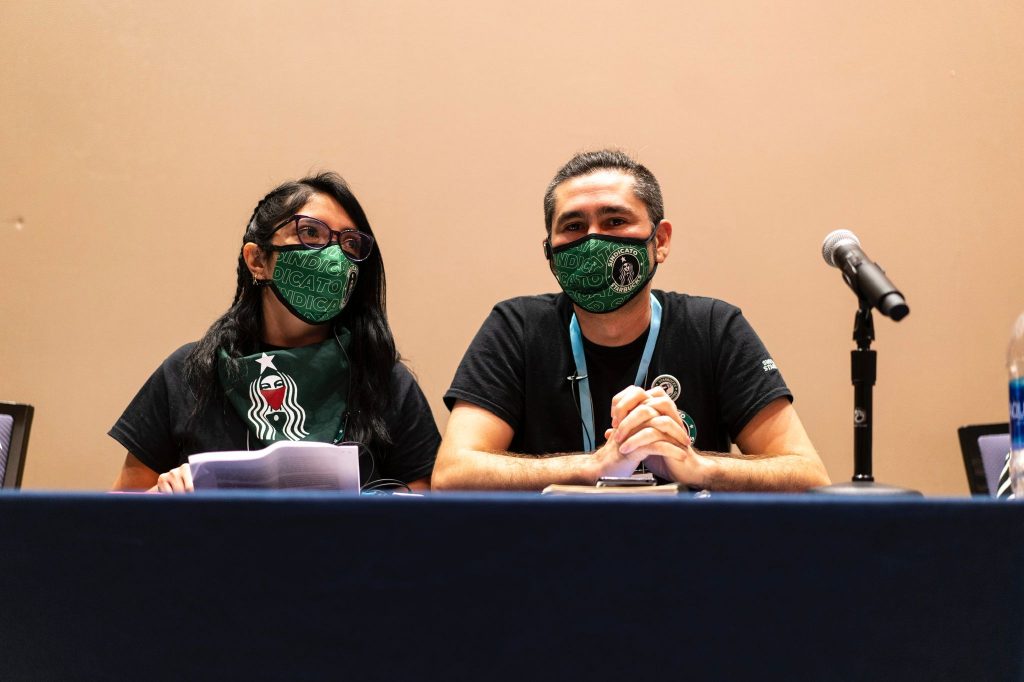 Hello, thank you very much for giving us the opportunity to talk at this important event. We come here from Chile, a third-world country that served as a laboratory of neoliberalism that was imposed under a bloody military dictatorship in the 70s that cost the lives of thousands of workers.

I point this out because, thanks to neoliberalism, Chile has been fertile ground for big multinational companies like Starbucks or McDonalds that exploit thousands of workers, above all women and young people, who are paid minimum wage which is not enough to meet their basic needs.

In 2009, the year in which our union was established, we observed with concern the crisis in the United States. We read about “the Starbucks challenge,” where the CEO of the company, Howard Schultz, openly acknowledged that to weather the crisis he preferred to throw thousands of families out onto the streets in order to save his business. In that moment, we thought that if we do not organize ourselves and form a union, the company will do whatever it wants with us.

But against the entire anti-union history of Starbucks, we managed to organize ourselves and form the first national Starbucks union in Latin America and one of the few Starbucks unions in the world, which took on its first collective organization just one and a half years after its creation. By that time more than 50% of Starbucks workers in Chile were organized, with a presence in almost 100% of stores.

At that moment, we naively thought that the path would be relatively easy, but from then on, the company intended to disarm us with all types of strategies: from illegal firings to pressuring and blackmailing workers – the same practices that you are probably facing in the United States.

But our resistance was stronger than their attacks, and we managed to survive all of their blows; despite being an enormous multinational, they could not defeat us. They were even forced to rehire my comrade [coworker] Antonio, the actual president of the union, who was fired in February 2012, the following year because of our persistent fight.

In 2015, we evaluated how to change our strategy. We looked to open all possible channels to reach young workers, to represent their desires and hopes. We fought all attempts at precarization by McDonalds and Sebastián Piñera’s government to make contracts and workdays more “flexible.”

In this way we arrived in 2019, with a strong union, with a presence in dozens of stores and a nucleus of activists who took to the streets during the social uprising that would begin at the end of the year.

October surprised us, but our experiences in the student movement of 2011 taught us not to hesitate in answering the calls to take the streets and fight to change reality, which condemns us to poverty and misery.

Our organization participated in the demonstrations and in the calls for a general strike. We looked to combine our bases in the fight for our rights. We called on other workers from other fast-food companies to create their own organizations and we helped workers from McDonalds and Burger King to unionize for the first time. This showed that even in these highly precarious workplaces with high turnover, the youth can and should organize themselves to fight against these large imperialist multinationals.

Shamefully, the majority of the traditional unions, led by parties of the coalition government, limited themselves to making calls without actually organizing anything. This weakened the mobilizations at a time when millions of workers were already protesting, and the workplaces didn’t become centers of organization. The leaders of these unions and the central unions did everything possible to extinguish the fire that we – the working class, women, queer and the youth – had started.

At the peak of the mobilizations, an agreement was made between the political parties of the “parliamentary Left,” center, and the Right to put a stop to the situation. This agreement allowed Sebastián Piñera to continue on as president. The repression cost many lives and led to the mutilation of hundreds of protesters, many of whom lost eyes. The police and military carried out the repression, assassinating, torturing, and violating human rights without consequences. On the contrary, the jails were filled with young protesters, who even today continue to be unjustly incarcerated or are being processed by a justice system at the service of the rich.

The social upheaval in Chile showed the enormous feelings of impotence and rage that had accumulated in wide swaths of the population as a result of the grave ailments they suffer at the hands of the capitalist and neoliberal system: the impossibility of accessing well-paying jobs and labor rights, education that puts people into extreme debt, the impossibility of finding stable housing, a public healthcare system that falls apart as the millionaires have their private clinics with access to the best healthcare, etc.

All of these problems became more critical during the pandemic, as the government – including the parties that now support the government of Gabriel Boric – approved laws that attacked workers and permitted big business to suspend contracts, not pay workers’ wages, and force workers to use their savings just to survive. During this period, the largest workers organizations refused to resist these attacks against the working class.

While lines at soup kitchens grew and unemployment affected greater swaths of the population, our union tried to reverse the government’s policy of suspensions in court, while we also delivered food and social assistance to our members throughout the country. While workers and their households suffered the consequences of the lockdown, the companies ensured their millions in profits, all while the government gave them all sorts of subsidiaries.

Thanks to the growing resistance, our organization won enormous legitimacy, tripled the number of our membership, and prepared ourselves to now transform our union into a tool to organize the working class youth in the fast-hood and precarious sectors.

For all of this, we resolved in our last general assembly of the union, to put forward a campaign for a minimum salary of 650 thousand pesos (u$s 750) that will adjust to inflation, because we cannot allow the working class to pay the costs of a crisis we did not create. We want to take this initiative to all workers, regardless of the area in which they work, since we cannot continue to tolerate the divisions imposed by the bosses against us. When in Starbucks, McDonalds, or in Burger King, whether in fast-food or service industry, whether Chilean or immigrants, the working class is one, without borders.

To end, we will not succeed in our struggle if we do not take into account our women and queer colleagues who have played a vanguard role in recent years. Our union has set up a Women’s and Nonbinary Commission that puts forward issues of oppression and exploitation without the commercial and consumerist perspective the way large companies do for example during Pride month. This commission is open not only to unionized locations, but to all Starbucks workers who want to join it.

While Starbucks and other businesses fly pride flags this month, our commission is advancing decisively with a protocol designed by the workers themselves to confront machismo and sexual harrassment and abuse in our workplaces. But the important thing is not just that more and more stores are taking up these protocols, but also that it is the workers and members of the LGBTQ+ community who are making these guidelines and making the decisions.

All these problems will be a challenge for the youth that is beginning to organize worldwide. Globalization spread capitalism across the world at a new level over the last 30 years, and today, after an enormous economic crisis and a long pandemic, the drums of war are beating once again. Surely the youth will have something to say and the workers’ organizations must amplify their voices.

Many thanks for inviting us to speak. Let us organize to end this capitalist system and create a world without exploitation or oppression, where we are socially equal, humanly different, and totally free.