What Can We Read from the Vote? 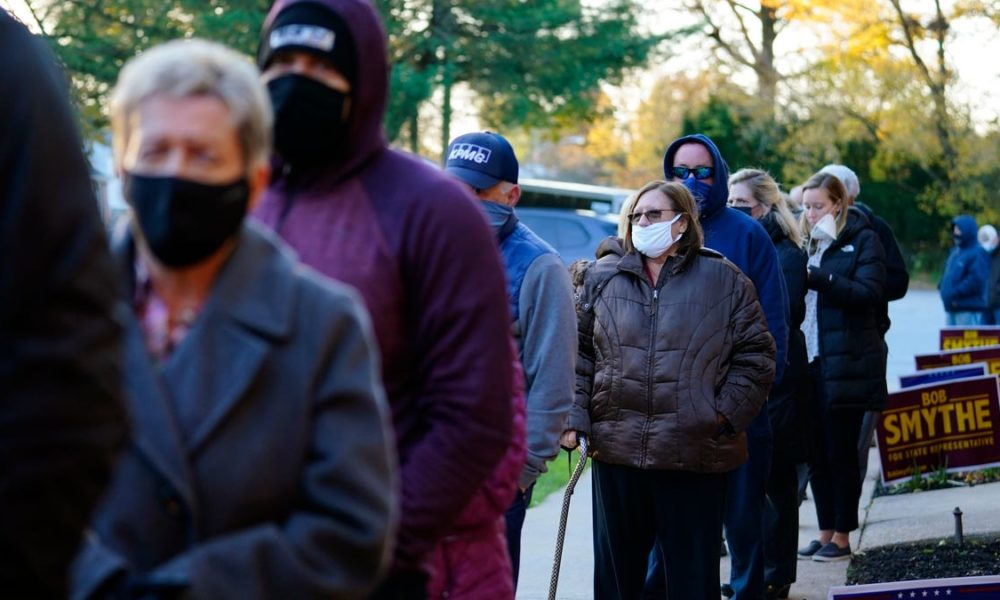 Of those votes, 100 million were cast early. Even before Election Day, early voting had surpassed all records, in many states reaching or even surpassing the total number of votes in 2016. The low turnout that typically characterizes U.S. elections has been turned around, at the end of a year in which millions of people participated in Black Lives Matter mobilizations and in which the presidential race became a kind of referendum on the management of the coronavirus pandemic, which threw the country into social and economic crisis. As in 2016, support for Trump exceeded what pre-election polls showed, and with the race close and still unsettled at this writing, it makes Biden’s likely victory a pyrrhic one.

Numerous analyses have pointed out the importance of demographics — more so than geography — in this election. This has proven to be especially critical for the Latinx vote and for suburban women in key states such as Pennsylvania, Arizona, and those in the Upper Midwest. About a quarter of the ballots cast in this election came from people who did not vote in 2016, and eight percent from new voters, according to the Guardian. Some of the Latino vote can be found among these groups, particularly new citizens who are highly motivated to vote. This vote was split: on one hand, a large number of progressive young people voted Democratic in urban and suburban areas (as seen in places such as Philadelphia, which is very different from the rest of Pennsylvania, and Austin, quite different from the rest of Texas); on the other hand, voters perhaps more worried about the economy (especially about small businesses) and high taxes came out in Florida and Ohio.

The coronavirus crisis and the race issue have been elements that turned out votes for Joe Biden. Democrats insisted on this focus in order to encourage people to vote, especially by mail. But this polarization has been instrumentalized by Trump to mobilize his base on Election Day, making a high performance as well. As a result, the Senate is turning red and will likely be a serious obstacle for a Biden government.

Trump’s base was more motivated by the economy, which is a contradiction. Some analysts have noted a short-term mindset in voting for Trump: despite the impact of the Covid-19 crisis, these voters still believe in the idea of the possible recovery Trump addressed in his rallies. In manufacturing and other industrial areas, where voters have been particularly hurt by unemployment and factory closings, some of Trump’s 2016 vote slipped back to the Democrats. This is how the Rust Belt became divided, but Biden seems to be recovering states such as Wisconsin and Michigan back to the Democratic Party fold, where they were prior to 2016. Still, this should not be seen as a blank check handed to Biden. Although he is generally considered a “pro-labor” figure in the Democratic Party, it was not long ago that the very counties he seems to have won rejected Democrats, who were seen as elites who had dismissed and abandoned them as “white trash.”

In battleground states such Arizona, Wisconsin, and Florida, the early vote has been mainly favoring the Democrats. Anticipating that scenario, the Republicans made turnout on Election Day a priority. That’s what happened in Florida, for instance — along with disenfranchising large sectors of the population, such as formerly incarcerated people. That and other undemocratic characteristics of the voting system explain the outcome, but so too does the failure of the Democratic Party to reach broader sectors of Black voters, as well as Puerto Ricans. In short, the Democrats did not achieve the smooth victory that was expected.

Joe Biden today has called on his voters to be patient and have faith, based on expectations for the uncounted mail-in ballots. He seems confident he will win the Rust Belt states necessary to win the White House.

Trump, by contrast, spoke In the middle of the night, before many votes were counted. He asserted that the Democrats were trying to steal the election and demanded no counting of any more mail-in ballots. Claiming fraud and promising an appeal to the Supreme Court, Trump is attempting to delegitimize the elections after his earlier efforts to discourage Democratic voters from participating by organizing his supporters to attack them and threatening the postal service. Caravans were deployed to polling stations to block the vote.

These aggressions in the days leading up to Tuesday are a violent reaction to the high levels of participation and political expression of the Democratic Party’s own base and beyond, including a sector of mainly young people who had not expressed themselves electorally before. The most radicalized component of the right wing base has been confrontational and on the attack for months, since it began mobilizing to attack the anti-racist protests. Now, after a highly contested election and with the president’’s approval, they are preparing to ignore a Biden victory. The feeling is that of a country split in half.

For its part, the Democratic Party mobilized a broad base to the polls in person, as well as to vote by mail. It managed to capitalize on the discontent and rejection of Donald Trump despite Biden’s weaknesses. Already, sectors of the Democratic base, the social movements, and the unions are discussing protests to defend their vote.

This election has shown how a deeply undemocratic electoral system collides with the aspirations of millions of people who want to change the course of the economy, healthcare, racial inequality, and employment. The mobilizations and incipient class struggle of earlier this year were diverted by the twin parties of capitalists onto an electoral path. Now the election itself will likely enter a legal path. Nevertheless, appeals to the street illustrate how firmly mobilization has become implanted in the political imagination over the last several months, and that the high level of participation in electoral politics does not necessarily imply blind trust in the electoral institutions or the capitalist candidates. The tightness of the presidential race will only strengthen the lack of confidence in the regime.

The form this political polarization takes depends on the winner and on the course of the class struggle. If Biden does ultimately win, he will have to arbitrate between a working class hit by the crisis that voted out the Democrats in 2016, a broad youth mobilization against racism and for paradigm shifts with to labor, health, and education, and the party establishment and billionaires. Trump, in contrast, is betting on the street to turn the election around and also as a political capital of his own he can use beyond the Republican Party itself. The tensions between the street and the palace of this week will continue at least for the next few months and years.