What’s at Stake in Catalonia?

Earlier this month, the Catalan parliament moved ahead with a process of secession from Spain, led by the coalitions Junts pel Si (Together for Yes, JxSi) and Candidatura d’Unitat Popular (Popular Unity Candidacy, CUP). The measure has been blocked by Spain’s highest courts and virulently opposed by neoliberal parties outside the region. What will the move toward secession mean for Catalonia, for Spain, and the continent as a whole? 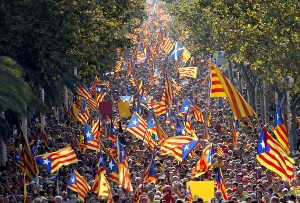 On November 9, a measure for the secession of Catalonia from Spain was approved by a 72-63 vote in the Catalan parliament. The measure was carried by the JxSi coalition of Catalan President Artur Mas, composed of various center-right and center-left separatist parties and the so-called “eco-socialist” coalition, CUP.

The vote was immediately condemned by Spanish Prime Minister Mariano Rajoy and the majority of the Spanish political establishment. The motives for their opposition, of course, are plain to see. Catalonia is home to Spain’s second largest city, Barcelona, and accounts for nearly 19 percent of Spain’s total GDP. The region’s GDP per capita is greater than that of South Korea or Italy. It is among Spain’s most important industrial regions, accounting for a quarter of Spanish exports and 23 percent of all industry in the country.

The secession measure sets up a separate tax and social security system for Catalonia and declares that Catalonia will no longer be bound by Spanish courts. In addition, it lays out a pathway to independence within 18 months and mandates that the creation of a Catalan constitution be underway within 30 days.

Following an appeal by Rajoy, Spain’s Constitutional Court suspended implementation of the law until the Spanish government has had a chance to present its case against secession. Spain’s largest neoliberal parties, including Rajoy’s Partido Popular (People’s Party, PP), Partido Socialista Obrera Espanol (Spanish Socialist Party, PSOE) and Ciudadanos (Citizens), have supported Rajoy’s appeal to block Catalan independence. In anticipation of the secession vote, the PP government passed legislation a month earlier that allowed for sanctions such as fines and suspension from public office of any legislator who disobeyed a ruling by the Constitutional Court.

However, a referendum on independence is widely supported by the Catalan people. Massive demonstrations of between one million and two million people were held each year since 2012 in favor of the “right to decide” on the independence question; the most recent demonstration took place on September 11 this year. In a non-binding poll in 2014, 80 percent backed independence, although it is important to note that referendum turnout was less than 42 percent.

In an unexpected twist, just days after the secession initiative, Artur Mas, one of the most visible proponents of the the measure, lost the vote which would have secured his presidency in Catalonia for another term.

The “ecosocialist” CUP, which holds 10 seats in Parliament, was among the parties voting against Mas’s nomination. CUP instead proposed Raül Romeva, also of the JxSi platform, but less associated with the corruption and neo-liberal agenda of Mas. This effort seems to have failed however as Romeva has rejected the nomination and pledged unconditional support for Mas.

Who’s at the Head of the Independence Movement?

Artur Mas is first and foremost a representative of the Catalan business class and holds strong ties to the banking and financial sector in the region. He was a member of the Board of Directors of the banking and investment firm CaixaBank. He served various positions in the center-right government of Jordi Pujol, who has been involved in several corruption and tax evasion scandals. As president of the Generalitat (the Catalan regional government), Mas oversaw massive cuts to health and education and presided over the layoffs of thousands of public-sector workers. Thus, CUP’s base has been reluctant to support the nomination of Mas. CUP’s leadership, however, has made only minimal criticisms of Mas’ program. The “Social Road Map” that he presents as a compromise – and that the CUP strives to present as a conquered concession – does not say a word about the reversal of the privitization process implemented in healthcare, not to mention the neoliberal “labor reform” that left 6 million people unemployed.

If Mas is not confirmed by January 8, new elections will be held in Catalonia. However, the CUP leadership has left an “outstretched hand” to Mas, leaving open the possibility for future support.

Catalonia is not the only Spanish region in which a secession movement is building steam. Last July, thousands rallied in the Basque region in favor of a referendum vote on independence. Although the armed struggle of ETA was ultimately defeated in 2011 by the Spanish central government forces after a four-decade-long campaign, a significant portion of the Basque population still favors independence. Of course, the move toward secession in Catalonia comes a little more than a year after Scotland narrowly voted against independence from the United Kingdom. A successful secession in Catalonia would certainly send shockwaves throughout the continent, and leave imperialist governments fearing which region would attempt a breakaway next.

Podemos’ representation in Catalonia, Catalunya Si que es pot (Catalonia, Yes we can) has voted against the declaration of independence, in line with the party’s position. Podemos leader Pablo Iglesias has made it clear more than once that should the independence process of Catalonia succeed, it must be through legal avenues. This of course means an amendment of the Spanish constitution, for which a three-quarters vote in Congress is needed—a safe dead end for the independence process. After Catalonia’s declaration of independence, Prime Minister Rajoy (of the right-wing PP) summoned party leaders across the political spectrum. In a strong symbolic gesture, Iglesias joined his call, showing his willingness to maintain any process under the control of the Spanish national state.

The question of the independence of Catalonia has been promoted by Mas and the Catalan bourgeoisie in an attempt to channel popular discontent and take attention away from corruption scandals. But at the same time, this very sensitive question for Catalans is built on massive popular support and a just cause: the right of self-determination. Any political force who claims to be democratic and progressive should side with the self-determination of the Catalan people.

It is important to note however that secession is, it itself, a not progressive demand, and the fight against capitalist oppression will be best waged by the whole of the Spanish working class united together. The defense of Catalan people’s right to decide lies in the fact that the Spanish state has played an oppressive role towards most of the nations it has historically ruled over—the Catalans, the Basques, the Andalusians, and the Galicians. The oppressive character of the Spanish state acquired a particularly harsh character under Franco’s dictatorship (1939-1975), when languages other than Spanish were forbidden, flags outlawed and the different cultures violently suppressed. After Franco’s death, with no foreseeable successor, King Juan Carlos I rose as the (Bonapartist) leader for restoration. He summoned all bourgeois political forces to smoothly administer the transition to constitutional democracy and preclude any possibility of traumatic rupture. The result was the constitution of 1978, a cornerstone that perpetuated the royalty’s dominance over public affairs and the subordination of communities in Spanish territory—a fatally incomplete democracy that must be contested or defeated if any of the democratic rights sought by Catalans or the Spanish people in general are to be achieved.

The Catalonian Question in the Spanish General Elections

The secession resolution has opened a tremendous political crisis for Spain, now just over a month away from the general elections. Earlier this month, Prime Minister Rajoy announced a “national front” to defend “Spanish unity” composed of his party, the PP, the PSOE, and Ciudadanos. Podemos represents a timid but de facto companion in this crusade.

Profoundly questioned by the Indignados movement in 2011, the 1978 two-party regime has opened the door for a reconfiguration of political forces. Ciudadanos and Podemos are capitalizing on the bleeding of the PP and the PSOE on the right and center-left, respectively. They are preparing themselves to rebuild and re-legitimize the political regime. None of the four resulting forces has overtly opposed the ongoing Spanish offensive, an indispensable point of departure to defend the Catalan people’s right to decide.

However, the independence process has no chance to succeed insofar as it is led by Artur Mas, a representative of the most decadent sectors of the Catalan bourgeoisie, with the CUP harnessed to its cart. Only a working-class political force with no alliance or compromises with sectors of the capitalist class can grant the Catalan people the right to decide. There are no shortcuts or parliamentary manoeuvres to accomplish this task, only mobilization and a strategy of class struggle.