Will Greta Thunberg Bring Bigger Climate Strikes to the U.S.?

On Wednesday afternoon, 16-year-old Swedish climate activist Greta Thunberg arrived in New York City. She had travelled across the Atlantic in a sailboat. Are bigger climate strikes coming to the U.S.? 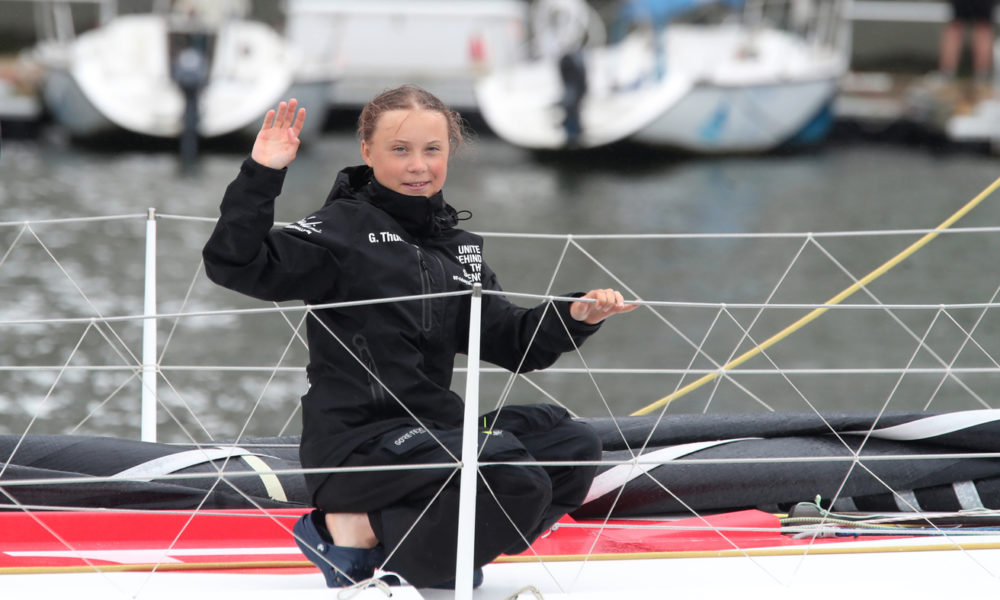 As the sailboat pulled into the harbor in Lower Manhattan, hundreds of people on the shore started cheering. Journalists from all over the world pointed their cameras at the ship, while young people held up signs and chanted. It was a reception fit for a pop star or a famous athlete. On the deck of the boat stood a small figure in a black jumpsuit: Greta Thunberg, the 16-year-old climate activist from Sweden.

One year ago, Thunberg began going on a school strike every Friday. She demonstrated in front of the Swedish parliament in Stockholm to demand immediate action against climate change. Her handmade sign said: “Skolstrejk för klimatet.” Young people around the world were inspired by her example. Under the hashtag #FridaysForFuture they began going on strike every week. On March 15, several million young people in 150 countries joined the strike.

Now activists are calling for a Climate General Strike on September 20. We think that unions need to join the strike.

Thunberg spent two weeks on a sailboat with four other people to get across the Atlantic—a form of travel with zero carbon emissions. On Instagram, she wrote that it was like “camping on a roller coaster.” When she got off the boat, Thunberg was clearly exhausted and shaky when she spoke to the assembled journalists and fans.

When asked about her plans in New York, she answered with the refreshing literalness of people on the autism spectrum: “I am going to finish the press conference, then return to the boat to get my stuff, then rest.” She remembered to add that she will be at the school strike for climate at the UN this Friday.

She will be attending a UN Climate Change Summit in September in New York, and the COP25 summit in Santiago de Chile in December. Thunberg arrives as the Amazon is consumed by fire. The goals of the Paris Agreement are completely insufficient to halt the warming of the planet. But even these goals are not being met: Last year saw record CO2 emissions. It is more urgent than ever to fight against the capitalist governments and big businesses that are destroying the earth’s climate for profit.

So far, the climate strikes have not really taken off in the U.S., at least not compared to Europe or Australia. The last big school strike in New York City, for example, was on May 24, when hundreds of students gathered at Columbus Circle and marched to Times Square. Thunberg’s presence could inspire more young activists in the U.S. to take direct action. Young people from New York at the harbor were demanding climate justice with the chant, “And if we don’t get it? Shut it down!”

Thunberg has at times let herself be co-opted by capitalist politicians trying to look green. The UN was out in force trying to push their meaningless “development goals,” and Thunberg’s speech at the press conference was full of NGO cliches about “working together despite our differences” in order to “take action before it’s too late.”

These kinds of platitudes and hopes in the COP25 summit are completely misplaced. Capitalism, based on an endless drive for profit at any cost, cannot be green. Hope for the survival of humanity lies in the perspective of the international working class taking control of all of society’s wealth. This would allow us to plan the economy democratically, eliminate fossil fuels and produce for human need instead of profit.

Despite all the natural contradictions of such a young activist, Thunberg has laid the foundation for a mass movement. The huge strikes by students have inspired sections of the working class to start discussing strikes against climate change.