With LA City Council in Crisis, What’s Next for the Movement?

The Los Angeles City Council continues to be in a political crisis following the leaked racist remarks of its members. How should the Left, the working class, and oppressed of LA respond? 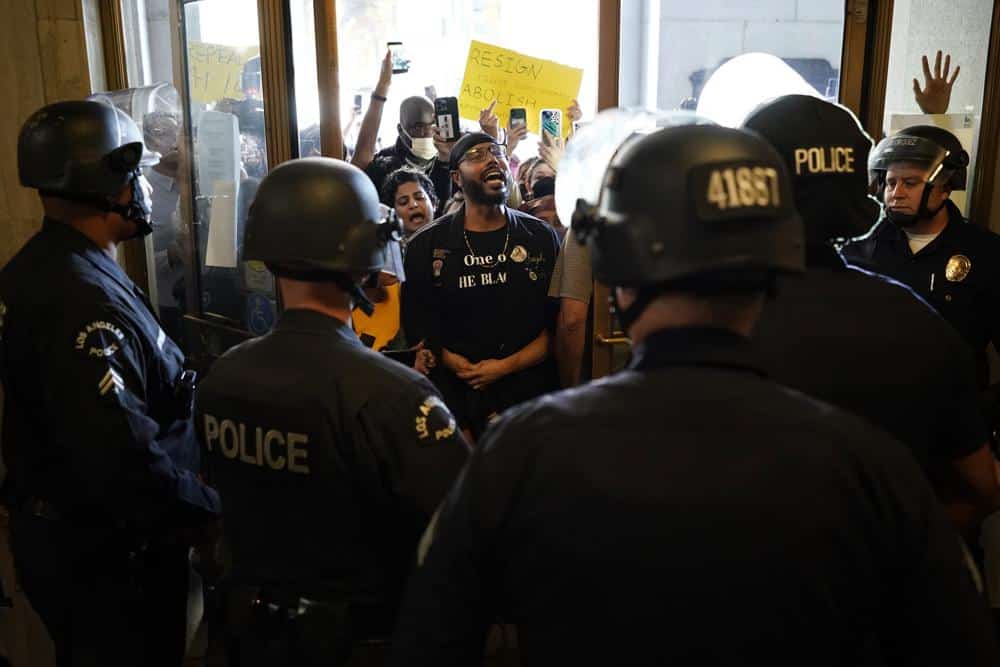 A leaked conversation of Los Angeles city council members using racist slurs during a meeting to discuss redistricting has opened up a challenge to the ruling institution of the city. The protest movement that sprung into action following the leaked audio recordings has helped create a politically dynamic situation that has exacerbated the political crisis and opened up the council to wide scrutiny.

The call for the resignation of city council members Nury Martinez — who has already resigned — Kevin De Leon, and Gil Cedillo have been widespread, and even President Biden has urged them to step down. Now, the California State Attorney General has launched an investigation into the council’s redistricting process. How far the movement goes and what concessions it wins will depend on how it organizes and wields its power.

Expand the Fight and Power of the Movement

While the movement’s main demand of De Leon and Cedillo resigning hasn’t yet been met, the city council has had to make some significant changes. It voted to strip De Leon and Cedillo, who have yet to resign, from all of their committee assignments. It also voted to establish an independent commission to be in charge of the redistricting process. City council even voted to expand the number of seats on city council in an attempt to make it “more representative”.

These are signs of the political instability the city council faces in response to the public backlash the protest movement represents. The movement now needs to have strategic discussions about the best ways to build off that momentum and go more on the offensive.

The movement should think about holding public assemblies at the protest to democratically vote on and discuss demands people believe would improve the lives of the working class and oppressed in Los Angeles. There should also be a discussion about demanding the repeal of city laws that punish the homeless and renters like Ordinance 41.18 or the Ellis and Costa-Hawkins Act. There should also be discussion about the struggle public sector workers are facing.

The public sector unions have already joined the call for De Leon and Cedillo to resign. In fact, they were also able to force Ron Herrera — who was also part of the meeting with Martinez, De Leon, and Cedillo — to step down as President of the LA County Federation of Labor. Teamsters Local 399’s statement demanding Herrera’s resignation specifically called out “the plans to create further division among working families in Los Angeles.” The movement should call on labor to stand united with the movement, and not only take action to force De Leon and Cedillo out of city council, but to fight for demands of LA’s working class and oppressed communities.

The city runs on the labor of public sector workers. If these workers went out on strike, LA city council would truly be unable to function — they would not be able to simply ignore or circumvent it.  As a starting point, labor should organize, together with the protest movement, a big march against racism and for unity of the multiethnic and multigendered working class.

Key Tasks for the Movement

In order to harness the full power of the working class and oppressed, the movement has to deal with three obstacles. First, it must recognize the role of the Democrats as the graveyard of social movements. While many of the Democrats, both locally and nationally, have renounced the council members’ racist comments, they fail to renounce and fight against the racist institutions like the police, prisons, and the military that do physical harm to people of color both here and abroad on a daily basis. In fact, President Biden, who has his own history of racist remarks, is a steadfast ally of the police, military, and prison industrial complex.

Secondly, the movement must recognize the stifling character top leadership of unions and non-profits play in the movement. Not only do these top leaders act bureaucratically, but they prioritize maintaining their relationship to the Democratic Party, which means they are never prepared to organize the type of struggles we need to win our demands.

Finally, the movement must recognize that as a consequence of the first and second points that the movement must seek to build an independent organization of the working class and oppressed, free from the influence of bureaucrats within the labor movement and the non-profits, as well as the Democrat and Republican parties, the two parties of capital. Such an organization has to function democratically and be a place where intense and principled discussion and debate take place. The decisions the organization takes has to be voted on by the members themselves, ensuring that the movement is in charge of itself and truly independent. The public assemblies at the protests and encampments can be the basis for such an organization. Sectors of labor should join these assemblies and call for the formation of independent organizations of union members to fight against racism, like LA Labor Against Racism.