Working-Class and Immigrant Communities in Paris Rise Up and Riot

Since Sunday, April 20, several working-class suburbs around Paris have been in flames after a man was seriously injured by police in Villeneuve-La-Garenne — a village just about 9 miles north of Paris’s center — on Saturday. This spark reveals that the government, with its state of health emergency and repressive confinement measures, is making the inhabitants of working-class neighborhoods pay dearly for the crisis. 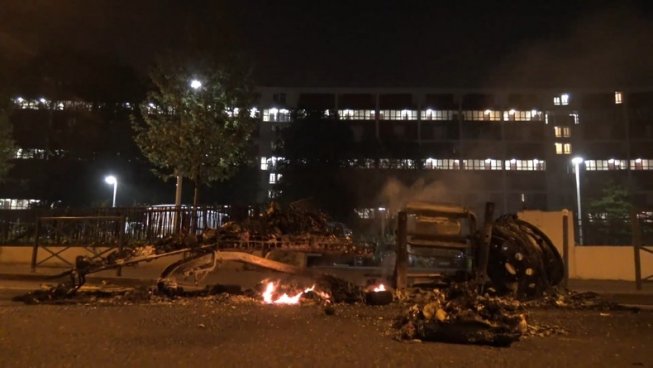 “When things start up again like they did in 2005, we shouldn’t be surprised.” These are the words of rapper Dosseh, spoken after police in Villeneuve-la-Garenne seriously injured a man on a motorbike in the leg on Saturday. The rapper was prophetic. Since Sunday evening, several working-class neighborhoods have been on fire.

It began in Villeneuve-la-Garenne, where anger erupted into a night of revolt. The Bondy Blog reported as follows: “For two hours, young people from the city’s neighborhoods defied the police with mortars and burning garbage cans.” Then it spread to other Paris suburbs — Fontenay-sous-Bois, Saint-Ouen, Aulnay-sous-Bois, Villepinte, and Neuilly-sur-Marne—as well as to other suburbs of French cities: La Reynerie in Toulouse, Amiens Nord, and Lormont near Bordeaux. Young people braved coming out of their confinement to protest the police violence. The state’s response has been classic: a spectacular deployment of police forces and no hesitation about repressing even journalists trying to cover it. This was shown clearly in the videos tweeted by Taha Bouhafs and “Le Sphinx” that night.

Indeed, since the coronavirus pandemic arrived in France, the government’s management of the crisis has been limited to the declaration of a state of health emergency on March 23 followed by repressive and antisocial measures. The government’s lack of preparedness and catastrophic strategy, which was responsible for the breakdown of the public health system and medical research, led it to impose brutal and repressive confinement laws. The French government has failed to come up with a health strategy adequate for this global pandemic. On top of this, state racism and the repressive policies implemented against the inhabitants of working-class neighborhoods — many of whom are immigrants from France’s former colonies — are exacerbating the marginalization and misery already in these neighborhoods, already so affected by inequalities. Meanwhile, the police have been given more free reign than ever.

“ If You Fill the Fridge, You’ll Get Coronavirus.”

In working-class neighborhoods,  the government’s brutal imposition of the confinement has resulted in a significant loss of income for many families that rely on precarious wages, particularly those in the service or catering sectors affected by the crisis. Take Fatoumata, who lives in public housing in Essone (Department 91). She’s an undocumented hotel cleaner from Ivory Coast who lost her job in March when tourist establishments were closed. Frightened of being subjected to an identity check given the increased police presence, “she has not left her home since the beginning of the confinement,” reports Le Monde in a survey of the food insecurity in neighborhoods like hers since the beginning of the health crisis. She and her daughter depend on food assistance from a neighborhood association.

Indeed, many families survive today only thanks to help from charities and neighborhood collectives. Le Monde reports that in Clichy-sous-Bois, the increase in the number of people showing up at food distributions organized by the Aclefeu collective and the Toucouleurs social center is revealing: “Some 190 people presented themselves at the first one, 490 at the second, and then 750.” In Seine-Saint-Denis, the poorest department1 in mainland France, the University of Paris VIII social services office there received no fewer than 1,000 requests for food assistance from students.

For those who must continue going to work — the “tiny invisible hands” that continue to run society during a total confinement, such as nurses and supermarket cashiers — the situation is no better. Stéphane Lafeuille, a garbage collector in Champigny-sur-Marne, told Le Monde: “Me and my temporary co-workers all live in great precariousness. If we fill the fridge, we get the coronavirus.” Indeed, like many people, this 40-year-old minimum-wage worker toils under a daily contract and therefore cannot even exercise his right of withdrawal2 to demand effective health protection from his employer. “Even today,” he said, “we still make our rounds wearing small plastic gloves, while private garbage cans overflow … the anxiety is permanent. If I catch the virus, I have nothing, no safety net.”

In Marseilles, the McDonald’s in Saint-Barthélemy was taken over by the workers and residents of the northern neighborhoods to organize food distribution and to store food in the cooler — against the wishes of McDonald’s France management. Indeed, throughout that city, many collectives have organized to help the most precarious populations: migrants, homeless people, families without income, and poor workers. As Nair Abdallah, a member of the White House collective, told Révolution Permanente on April 9, “Families are starting to tell us that they no longer have anything to eat. One mother said she and her children had nothing but onion soup to eat for more than three days.”

The next day, as the El Manba collective was distributing food in Marseille’s 1st district, the police intervened and fined five activists for failing to respect the confinement and accused them of not following the confinement and social distancing protocols. The collective issued a statement: “We don’t take lightly risking violations of the health security measures — with which we agree. However, there is an urgent need to organize solidarity with the people most affected by this crisis. We know better than to expect anything from the government; it mistreats these people every day, confinement or not.” Linking this situation to the repression and state racism that is a regular occurrence in working-class neighborhoods, which is only exacerbated during periods of confinement, the activists of the collective continue in their statement: “The number of face checks resulting from ethnic profiling is exploding, and people living on the streets tell us that brutal checks, beatings, gassings, and car chases are more common than ever.” When the streets are emptied of potential witnesses, there is nothing but space for the police to act with impunity.”

These acts are not isolated. In Toulouse, independent blogger Yves Faucou reported on April 9 that “a truck full of food from the Food Bank, whose cargo was intended for at least 800 people living in squats,” was stopped by the Prefecture of Police of Haute-Garonne. On Wednesday, April 8, 33-year-old Mohamed Gabsi, homeless and living under tremendously precarious conditions, died in custody after being arrested for violating the confinement in Béziers. His was the first reported death at the hands of the police since the confinement began. And while the inhabitants of working-class neighborhoods are now in the front lines, it should be remembered that only a few months ago, it was the Yellow Vests in the traffic circles, and then the RATP strikers against pension reform at the bus depots, and other demonstrations that were the victims of police repression.

Confinement exacerbates the marginalization of young people in working-class neighborhoods who already face misery each day. “Educational continuity” is next to impossible for young students too poor to have computer equipment and an Internet connection at home. Le Monde described Sofia, a high school student from Clichy-sous-Bois, who has “no computer, no printer, and only one phone for four children” and made note of both the “rights she never had” and the “chances she will never have again.”

Condemned along with their families to cramped and sometimes unsanitary housing, young people in these circumstances are facing another ordeal: they have no way around running into the police when they leave the buildings of their large public housing complexes. Sofian, 21, was on his way to work making deliveries for Amazon. He’s forced to work despite the pandemic, his life apparently worth no more than the profits of his company. He saw policemen in the distance. Realizing he had forgotten his papers that allow him to be on the street, he tried to leave quickly. The rest of what happened was captured in a video that has gone viral on social media. The young man’s cries of pain bear witness to what happened. First, he was bludgeoned while being held down on the ground. Then, the BAC police dragged him to the enclosed porch of a building so they could continue to beat him out of the sight of others.3

Caption reads: Police brutality, again.This time, it’s in Les Ulis (91), on March 24, 2020. In this video, Sofiane, 21 years old, is violently arrested by agents of the BAC. A deliverer for Amazon, he was leaving his father’s house and going to work.

This wave of police violence is combined with the government’s anti-social attacks on those who work, especially in precarious jobs. In this time of health and economic crisis, the residents of working-class neighborhoods are being made to play the role of structural adjustment variables in the labor market for the dominant classes — “the first hired and the first fired,” as the sociologist and neighborhood activist Saïd Bouamama put it his article “Immigration and Class Struggle.” The authorities must maintain permanent pressure on these young people from the suburbs, often of immigrant origin, through regular police intimidation and by excluding them from “stable” jobs. On top of all that, the residents of these working class neighborhoods are also being used as “straw men” by the government, the big media, and the extreme right, who blame them for “not respecting the confinement.” It’s all part of their effort to mask their catastrophic management of the health crisis and the lack of hospital resources and medical  research resulting from their neoliberal policies of destroying public services.

For all these reasons, we must oppose the “national unity” advocated by Macron and MEDEF, 4 which is only a cover for the repressive and racist government policy of making workers, and residents of working-class neighborhoods pay the highest price for the crisis. To unify our class, it is necessary that all the organizations of the workers’ movement first denounce this security overkill, these police crimes, and this state racism, which are directed especially against the residents of the working class neighborhoods. We must put forth a program that demands the hiring of all precarious workers on permanent contracts and the prohibition of layoffs, an end to evictions, the requisitioning of empty homes to provide everyone with a roof over their heads, control of food prices by the people and the workers in agribusiness in the face of the coming crisis, a health strategy that genuinely tackles the virus through mass testing of the population, not only of those with symptoms, and effective masks for all.

First published in French on April 20 in Révolution Permanente.