Nearly two years into the pandemic, there are hours long wait times to get tested for the coronavirus in New York City. There has been a 194 percent increase in cases over the past 14 days. This is the product of a system that puts profit over people’s lives. 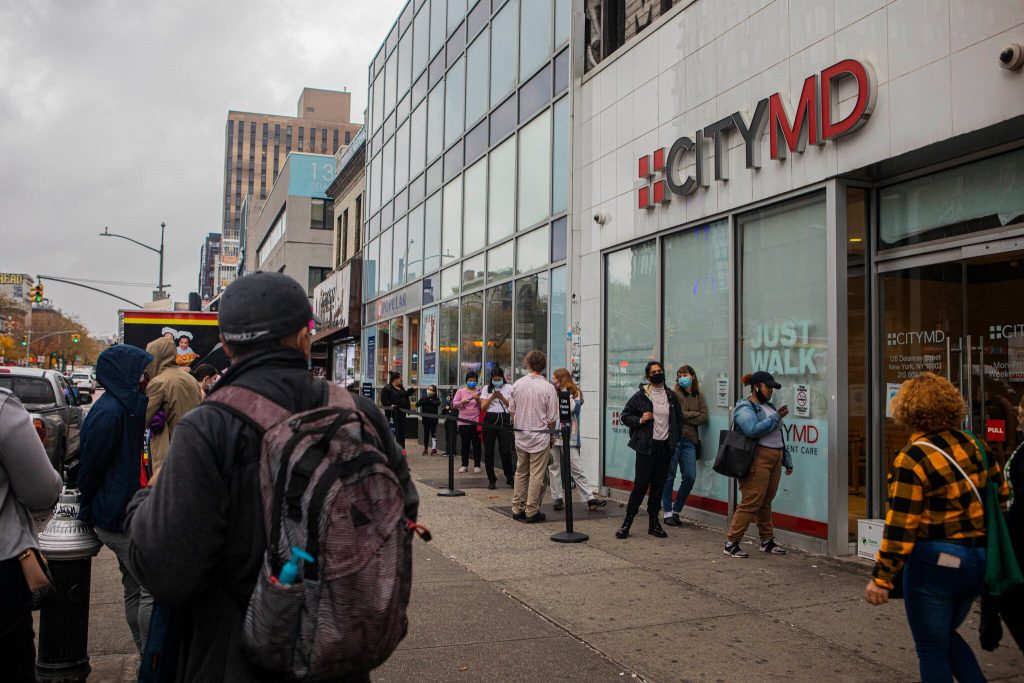 There is a running joke on TikTok that everyone in New York City has the coronavirus. While that’s not quite true, the number of people who have tested positive is higher than at any point in the pandemic, with 21,027 new coronavirus cases reported in New York state on Friday, the highest single-day total on record. That’s a 194 percent increase over 14 days. The daily rate for New York City is 11.589 positive Covid tests— and that’s only the people who were able to get tested.

The purpose of all the jokes on Tik Tok is to make us laugh so that we don’t cry. A year and a half into the pandemic and New York City has had a massive outbreak and has been thrown into chaos.

This exponential increase is because of the highly contagious Omicron variant that seems to infect even healthy people who are fully vaccinated, and even those who have received booster shots. The situation at Cornell University is especially indicative; despite a 98 percent vaccination rate, 900 people tested positive for Covid in one week.

The Democrats and the Biden administration have taken a “vaccine only” approach to fighting the pandemic: vaccine mandates and throwing to the wind all other Covid precautions. As a result, bars, coffee shops, concerts, and other social venues are open to people— unmasked— if you have the vaccine. Schools are open and running— and stay open and running despite Covid outbreaks. It’s clear that under Biden as well as under Trump, there is gross mismanagement of the pandemic because capitalist profits are valued over the lives of working people.

By Thursday of this week, Bloomberg news was reporting that in New York City, the Covid situation was changing by the hour— the number of positive cases was rising dramatically. I can attest to the fact that suddenly, it seemed that one by one the people around me were all testing positive for Covid.

As Christmas is only 10 days away, people rushed to get tested, hoping to spend time with family in a responsible way. No one wants to give Covid to Grandma.

In scenes reminiscent of Christmas and Thanksgiving 2020, lines wrap around city blocks for testing. People report spending hours in line in the December cold and rain. It also means that countless people were deterred and just went home.

At testing centers around the city, people are being turned away for lack of tests.

This comes after 20 covid testing centers were shut down recently. For example, the massive LaGuardia testing center was converted to small vans on December 4, and this center remains limited to two small vans despite the rise in cases and increased demand for testing.

And what is worse, not all coronavirus tests are free. An uninsured friend told me she went to get tested, but they would have charged her over $30 without insurance.

One friend in Michigan told me that she booked a coronavirus test in order to travel. She will have to pay $100 for the test.

Unlike last year, there are rapid tests… right?

But if you go to any store in NYC, in all likelihood you won’t find rapid tests. Yesterday, I went on a mission to find one. Six pharmacies: sold out, sold out, sold out. It’s the same way all over the city. One pharmacy worker, tired of repeating the same message over and over, taped a sign to herself that read “At home Covid tests sold out.”

I finally did find one and paid $35. But I know people who were not so lucky. One person reported buying a test for $50.

On Thursday, New York City Mayor Bill deBlasio announced the city would begin distributing half a million at-home rapid Covid-19 tests for free. There are over 8.5 million people in New York City. It’s a symbolic drop in the bucket compared to the need right now.

On December 2, the Biden administration promised that private insurers would have to reimburse the cost of at-home rapid tests. But this policy won’t go into effect until January, so many insurance companies won’t reimburse the at-home tests people are currently seeking to stay safe.

“That reimbursement plan is not going to really help us over the holidays, when obviously the risk of transmission is highest,” one public health policy expert, the University of Maryland’s Zoe McLaren, told The New York Times.  But either way, this is also contingent on people actually having insurance, which 28 million people nationwide don’t have.

Even a reporter at a White House Press conference pushed ​​the Biden administration on how inconvenient and bureaucratic the whole process of getting rapid tests would be.

“Should we just send one to every American?” Psaki asked the reporter back.

We need far more than one test per person. Each person should have easy access to tests whenever they want one to really keep people safe.

Psaki’s cynical and callous answer highlights exactly what the Biden administration is thinking about: costs. He’s thinking about how to maintain the profits of the pharmaceutical industry while spending as little money as possible on actually solving the coronavirus and keeping people safe. And the companies that produce tests are making massive profits. And the result is that a year and a half into the pandemic, there is a mass outbreak and still, a year and a half in, there isn’t sufficient testing.  Whether under Biden or under Trump, the gross mismanagement of the pandemic is evident. And people will pay with their lives.

It’s no secret that the pharmaceutical companies that hoard vaccines have made massive profits: the announcement of Omicron caused a jump in the stock prices of Pfizer and Moderna, creating over $10 billion in new wealth for just the companies’ top eight shareholders. But the testing companies have also made massive profits.

As people struggle to get tests, and as the costs of tests shoot through the roof and we head into another pandemic winter, it is once again clear that private ownership of pharmaceuticals and healthcare will always put profit first and people last.

Testing shouldn’t be in the hands of corporations who want to use the pandemic to get rich. We must fight for the nationalization of industries that can make tests and organize the mass production of tests. And yes, we should be handing out rapid tests on every block, at every school, pharmacy, church, synagogue, mosque, and community center. And it’s healthcare workers and community members, not capitalist politicians, who are best equipped to organize mass testing to really keep us safe.

And mass testing is not enough if those who test positive can’t afford to stay home. We need paid leave for everyone who tests positive or who has come in contact with a Covid positive person. Even under Biden, there is still no universal paid time off for people who test positive for Covid.

But even all of these measures are only part of the solution. More variants and even more deadly variants are likely to emerge if Covid is not stamped out, which includes testing, tracing, isolation and mass testing. That means directly confronting the companies making huge profits from Covid, as well as the Biden administration, which is facilitating that process. It also means having politics toward vaccinating the whole world. Vaccine imperialism and the hoarding of vaccines are responsible for Omicron and will likely be responsible for more deadly variants. It is essential that vaccine patents be lifted and a global coronavirus strategy be taken, which includes vaccines, mass testing, and paid time off to isolate.

As New York City is overrun by the coronavirus and many get 2020 déjà vu, it’s clear that neither Biden nor Trump will protect us. It is essential that the working class and oppressed people, all of those waiting in long lines and struggling under the pandemic, unite to fight to keep ourselves safe.