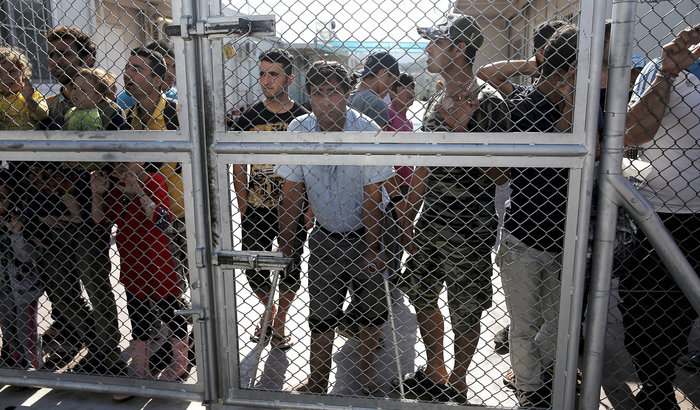 The border to Macedonia and the rest of the EU is closed. 57,000 refugees are stranded in Greece. What is their situation?

Since March, when the Agreement between the European Union and Turkey was signed, the road to Europe is officially closed to all refugees and immigrants. This Agreement affirmed a situation that was already being consolidated, as one European country after another unilaterally closed its borders. Now the so-called left government of Greece assumed the task of being the EU’s bulwark against refugees EU. The plan is to restrict all refugees to Turkey – the Erdogan regime gets money in order to keep them in large camps.

Entries from Turkey are no longer arriving. But up to 57,000 refugees will remain in Greece for an indefinite time. Several hundred live in the streets or on the squares. Several thousand live in self-organized squats. Most refugees live in the so-called “accommodation centers”, which are in fact prison camps, or in “hot-spots”, where newcomers are identified and subsequently either apply for asylum or are deported back to their countries or sent back to Turkey.

Conditions in these camps vary a lot, but they are generally awful, with inadequate facilities and bad food. In many cases, refugees cannot leave and supporters cannot enter. Centers are run by the army or by NGOs, without any signficant control.

Recently, the death of a young woman in the camp in Diavata has been condemned – it could have been prevented if there had been a doctor present. In Ritsona and in Larisa, refugee committees have formed to protest for better living conditions. The tents stand under the sun, the food is insufficient and often spoiled, the toilets are few and broken, and the area is full of snakes and scorpions. Several cases of malaria have been reported in camps all around the country.

Tens of thousands of refugees is not so many in a country of more than ten million inhabitants. Why are the living conditions so desperate?

The government justifies this with the crisis and the austerity programs of the EU. But is this convincing? In the 1920s – after Greece had been devastated by an imperialist war – the country with five million inhabitants received an additional two million refugees from Turkey. 60,000 refugees in a country with around eleven million inhabitants today is nothing by comparison. It is a political decision to condemn people to these terrible conditions. It is part of a clear strategy, shared by all the capitalist classes of Europe, to keep everybody out of the continent, apart from a few that can be useful for capital. It is a manifestation of the deep racism of the Greek state and the EU.

In 2015, hundreds of thousands of refugees passed through Greece. Now that so many are stuck – are they interacting with the Greek population?

It is now becoming evident that tens of thousands will stay here, perhaps for years. In this context there are first signs of self-organization by the refugees, difficult but inspiring. Assemblies have been organized in the port of Piraeus, in Ellinikon etc. In some camps, refugees have elected their own committees. Others are involved in the management of squats, along with Greek solidarity activists.

Just in the last month, independent refugee mobilizations broke out in Diavata, Ritsona, Chios and Lesvos. In two cases, big demonstrations have been organized with the joint efforts of refugees and Greek militants. The biggest one was in March, when more than 5,000 refugees demonstrated through the center of Athens along with supporters.

Political consciousness is starting to grow among certain groups of refugees – despite the fact that many come from countries where the left was destroyed a long time ago, and therefore a Marxist background is very rare. Many refugees are involved in political meetings and assemblies. Sometimes there are surprises. For example during a meeting in our office, some Afghani comrades noticed a forgotten copy of the Communist Manifesto in Urdu and Farsi. One of them said that he could remember the title, because once upon a time his father had a copy, which he had never seen since back then. They made copies and took them to the camp.

Of course, there are conflicts among refugees, and communication with Greek militants is difficult sometimes. There is a long way to go before the newcomers will be incorporated into the workers’ unions. But the multi-faceted solidarity movement has made a first step possible.

How is that affecting the political mood in Greece?

Despite the xenophobic hysteria promoted by the media and the far right, solidarity currently prevails over racism. There have been racist attacks, especially in the villages and on the islands, which the Nazis of the Golden Dawn have tried to capitalize. The racist agenda that hides beneath the hypocritical humanitarian rhetoric of the government and the EU, as well as the total moral failure of a government that calls itself “left”, create a fertile ground for Nazis. However, at least for the moment, the Golden Dawn is not profiting from the situation. This is due to the broad movement of solidarity and to the positive reflexes of working people.

What are the proposals of the revolutionary left for the refugees?

The revolutionary left, despite a number of contradictions and the relative lack of internationalist traditions among the Greek left, has played an essential role in the solidarity movement. We have already mentioned the squats, where the revolutionary left is involved along with anarchists. Last autumn, a coordination committee of radical workers’ and students’ unions, led by the anticapitalist left, was founded and now holds frequent general assemblies. The coordination committee is involved in both practical solidarity and political campaigns, such as the nationwide demonstration against the border fence in Evros. The committee has visited nearly all the camps around the country to establish connections with refugees. It has also played a key role in organizing the demonstrations in Athens and other cities.

There is definitely an even greater role for the revolutionary left to play, not only in the form of solidarity actions, but also in promoting a political struggle on the basis of some key demands: open borders to and from Greece; abolish the racist Agreement between Turkey and the EU; no discrimination of “refugees” and immigrants, legalization for all; asylum for all who request it; decent conditions of accommodation, within the cities and not in isolated camps; no restrictions to the free movement of refugees and immigrants; secure the right of immigrants to work and join the unions; secure the right of children to go to school and be taught in their own language as well; organize refugee committees; stop all imperialist interventions is Syria, Afghanistan, Middle East, Africa; denounce the racist policy of the Greek state and its involvement in imperialist activities; break with the racist, capitalist EU, in favor of a genuinely internationalist perspective etc.

It is crucial to introduce these demands not only in the unions and organizations of domestic working people, as has already happened in the most radical cases, but also among refugees and immigrants themselves.