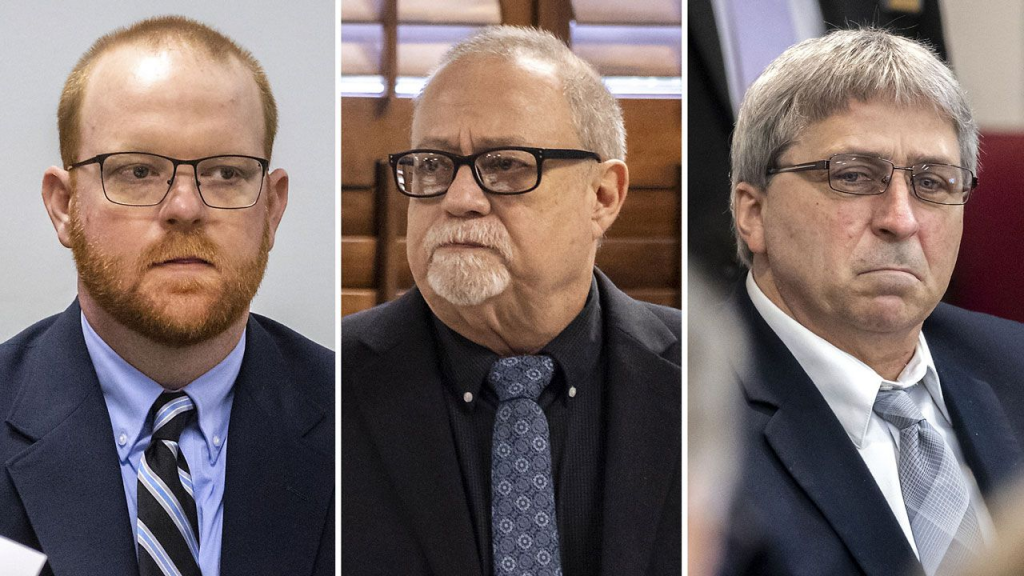 With Kyle Rittenhouse walking free after killing two protesters against police violence, all eyes should be on Georgia where the three white men who killed Ahmaud Arbery are on trial.

Travis McMichael, his father Gregory McMichael, and their friend William “Roddie” Bryan face felony murder charges for chasing down and murdering Ahmaud Arbery in Brunswick, Georgia. Arbery was known for regularly jogging in the Brunswick neighborhood of Satilla Shores. On February 23, 2020, he was on one of his jogs when the McMichaels and Bryan chased him around in separate vehicles. This chase ended with Travis McMichael shooting Arbery dead with a shotgun.

The McMichaels and Bryan do not even deny that they killed Arbery. Their claim is that they were justified. According to them, they had intended to make a citizen’s arrest because they thought they had seen Arbery entering a house under construction earlier that day. Travis goes even further, suggesting that chasing down a Black man with a shotgun — who himself was unarmed and running away from his pursuers — was an act of “self-defense” and that the experience was traumatic for him.

You might be interested in: The Rittenhouse Verdict Is a Green Light for Right-Wing Vigilantism. The Left Must Respond

The audacity of Travis to paint himself as the victim and the hubris of these men to think that their racist murder of Arbery was somehow justified is not surprising. After all, the Black Lives Matter movement, while primarily focused on cases of police murdering Black people, initially sprang from an incident of a white vigilante (George Zimmerman) targeting and killing a Black child (Trayvon Martin) and then being let off the hook by the courts. It is no wonder that more white men are taking it upon themselves to punish their Black neighbors for imagined crimes.

With closing arguments scheduled for Monday morning, November 22, the question is not whether the McMichaels and Bryan are guilty — it’s whether the jury will convict these men or let them walk.

Should they be acquitted, it would be a dangerous endorsement of the already rising tide of far right vigilantism that the racist U.S. “justice” system has always emboldened — part and parcel of which is Kyle Rittenhouse going free. Though his victims were all white, his actions took on a similar white-supremacist character by targeting people who took to the streets in defense of their Black neighbors.

Many are correctly citing the “not guilty” verdict in the Rittenhouse trial as the start of open season on anti-racist activists. This public acceptance of far-right vigilantism is additionally concerning when put into the context of the right’s larger use of the courts to push its agenda. After all, the Texas abortion ban deputizes private citizens to target anyone who seeks an abortion or assists with one. Republicans have also been pushing anti-protest laws that would provide legal immunity to anyone who targets protesters with a vehicle. These laws come after a summer in which cars were used to attack Black Lives Matter protesters in the streets in Texas, New York, and elsewhere.

The jury should find all three of Arbery’s killers guilty. However, even if the jury makes the correct decision, we should not be fooled; it in no way legitimizes the racist “justice” system. After all, legislatures are working in real time to legalize far-right violence. It’s already dangerous enough that cops regularly terrorize Black communities. Now, racists everywhere are being shown that they can commit acts of terror against activists on the Left, and more often than not the state will side with the right-wing violence, so long as the interests of capital are not under threat.

As the Right uses the courts, the racist institution of policing, and vigilante violence to advance itself, it is essential that the Left build a revitalized anti-racist movement in the streets and in our workplaces. We must demonstrate that we won’t be scared into submission to the Right’s advance and their attacks on oppressed communities. It is also essential that we learn from the mistakes of the 2020 protests, which were co-opted and snuffed out by the Democratic Party and the NGOs. They’ve shown once again that racism cannot be fought through the institutions that uphold it.

Workers must also play a key role in a revitalized movement against racism. As more and more workers throughout the country realize the power of their greatest weapon, the strike, to achieve their labor demands, they must also be willing to wield the strike in defense of their Black co-workers. Workers in Kenosha should refuse to work until Kyle Rittenhouse’s victims receive some justice. Workers in Brunswick, Georgia should shut the city down in support of Arbery.

Now more than ever, the unity of the working class and specially oppressed communities is the essential path forward for the Left to fight back.