Maddie, an LDJ5 warehouse worker explained that many organizers had nicknamed the LDJ5 warehouse the LDGay5, given how many of the organizers are queer. The fight against oppression is intrinsically tied to the fight for a union for these workers. 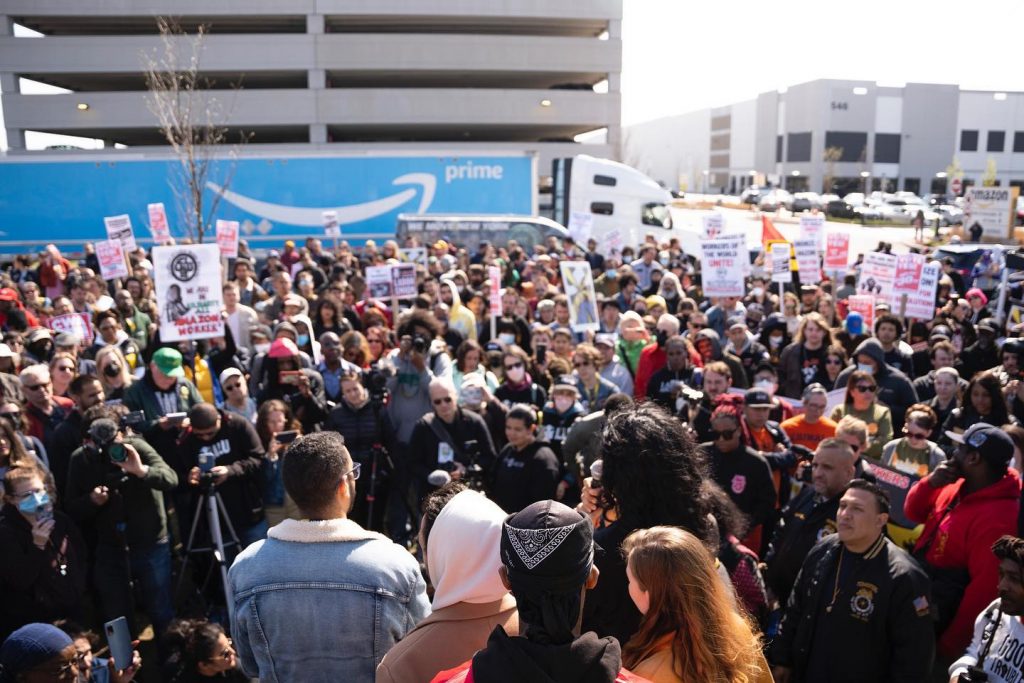 On Sunday, April 24, the workers at the two Amazon facilities in Staten Island, New York, held a pair of rallies. The goal was to build support for their the attempt to unionize a second Amazon warehouse, known as LDJ5, whose workers began voting on Monday, April 25. The events brought in high-profile speakers, from Bernie Sanders to Sara Nelson, but the most interesting perspectives shared came from the rank-and-file workers.

One comment stood out. It came from Maddie, an LDJ5 warehouse worker and the treasurer of the Amazon Labor Union. She joked to me that many organizers had nicknamed the LDJ5 warehouse the LDGay5, given how many of the organizers are queer. Seizing on this, I asked how it connected to the organizing effort. “It’s definitely important,” she said. “Queer people are disenfranchised in their workplaces all the time. In fact, you know, we experience homophobia on the job. And Amazon does nothing to protect us.”

Another Amazon worker, a Southeast Asian woman, who has been standing near us, interjected, saying that Amazon workers experience “racism, sexism, nepotism, all the isms in the world.”

Maddie agreed, adding, “They’re all connected. And Amazon is no different than any other company. And they perpetuate the same systems that all these companies perpetuate, including all those things that were just stated.”

I asked Maddie if she thought the union could help fight for queer rights, which is essential to resisting the deadly spate of anti-queer laws being passed around the country. Maddie didn’t miss a beat: “I think that that’s really important. Amazon’s trying to appropriate, you know, the queer movement with Glamazon and their affinity groups and stuff. But at the end of the day, it’s not any real—”

Suddenly, seemingly out of nowhere, a “loss prevention officer” — Amazon’s private security — appeared and sternly told the assembled workers and journalists, “If you are not an Amazon associate, please get off the property. I’m asking nicely.”

This did not go over well, and another Amazon worker standing near us began to argue with him, asking pointedly what he’d to do if we didn’t move.

The security guard threatened to call the police. “OK, so then call the cops,” the worker defiantly sniped back.

After some back-and-forth, the guard backed off and said, “You got better things to do on a Sunday, anyway. I know I do.”

For all of the guard’s claims, it was clear that, for Maddie, her fellow workers, and the folks who gathered there to support the unionization effort, this was indeed the best use of their time on a Sunday. This fight is important, and the workers leading it are willing to face down one of the richest men in the world to do it. Even being threatened with the cops didn’t dete Maddie fromapproaching us a few moments later to say one last thing:

Real queer liberation isn’t won through getting high-profile queers into boardrooms or through performative corporate projects like Glamazon. Queer liberation is won through the collective action of the working class on the side of all oppressed people. It’s the organizing of queer workers like Maddie alongside workers of diverse ages, genders, races, nationalities, and sexual orientations, who join together to take on Jeff Bezos and Amazon — even if they cynically drape themselves in rainbows. It’s in using the strength of workers to fight the onslaught of attacks against queer people. And we are seeing more and more signs that workers are realizing these connections. From Disney workers walking out to protest the company’s support of the queerphobic politicians who passed the “Don’t Say Gay” bill in Florida to digital workers striking to demand better trans healthcare, queer workers are on the front lines of this new labor movement. They want to fight for their rights both in and outside the workplace.