Amazon’s Retaliation Against Worker Activists Must Be Defeated

In the last two months, at least five pro-union activist workers have been fired at the Staten Island Amazon warehouses. Yesterday, Pasquale Cioffi, a process assistant who played an important role in the union victory, was also fired. 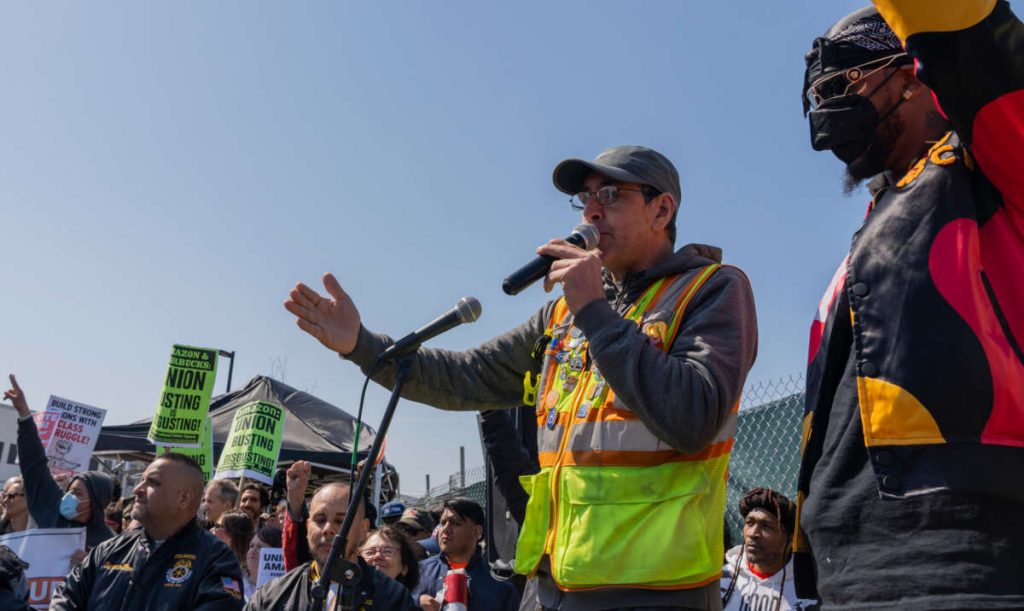 Although more than two months have passed since Amazon workers at the JFK8 warehouse in Staten Island successfully unionized, Amazon is still refusing to recognize the union. The company has filed more than 25 objections to the new union and lawyers for amazon are set to attend a National Labor Relations Board (NLRB) hearing in Phoenix, Texas on Monday to defend those claims.  According to Amazon Labor Union (ALU) lawyer Seth Goldstein, Amazon’s objections are “racist, baseless, and absurd.”

Of course, Amazon and its executives couldn’t care less whether these elections were fair or not. On the contrary, these objections are nothing but an attempt to actually undermine the will of the workers.

Amazon’s main goal is for the NLRB to call for a new election and give the company a second chance to overturn the results. This would keep Amazon union-free, and allow it to continue maximizing its massive profits (the company is currently worth at least $1.5 trillion).

If nothing else, Amazon hopes to make the process of recognizing the union as slow and costly for the union as possible. JFK8 has just 8,000 workers, compared to over a million Amazon warehouse workers across the United States. The longer it takes for the union to get a first contract and begin organizing at other warehouses across the country, the more isolated they will become.

In addition to presenting complaints to the NLRB, Amazon also has a more direct way of attacking the workers’ organizing: firing the most pro-union, outspoken workers and organizers. As we have previously reported, several workers from Staten Island warehouses have been fired, including Alicia Johnson, Tristan “Lion” Dutchin, Mat Cusick, James O’Donnell, and Gabby Rivera. This week, they fired Pasquale Cioffi, a process assistant who played an important role in the union victory.

The ALU tweeted, “What they did to Pat is unjustifiable. It’s clearly motivated by anti-union animus and they’re only going forward because they believe it’s more cost-effective to fire him and deal with the backlash than it is to allow him to continue organizing during our contract campaign.” The union later added, “it’s a war.”

Indeed, this is a war, but Pasquale is not the first pro-union organizer to be fired from JFK8 after ALU’s victory, and the union makes no mention of the five workers previously fired by Amazon. The war was already happening. Putting up a strong campaign when these retaliatory firings started would have put workers in a much stronger position to fight back against Pasquale’s firing, and against Amazon’s attacks in general. But it’s not too late.

Amazon has an enormous arsenal of money, lawyers, and lobbyists at their disposal, but the ALU has power too: the power to withdraw their labor and demand that these workers be reinstated. And every ALU supporter, including the entire NYC labor movement, needs to stand in solidarity with the fired workers and fight back. As ALU organizer Justine Medina put it: “ The Bosses can’t stop ALU,” if they stand united.

For Amazon, these tactics serve dual purposes. Delays in the legal arena and retaliation on the shop floor are connected tactics. Getting rid of the more prominent pro-union workers not only weakens Amazon workers’ struggle for union recognition and their first contract — it also weakens the ALU’s ability to push for further unionization at other warehouses. And this is what Amazon fears most.

In the same way, from the worker’s perspective, the fight against retaliation, the fight to organize additional Amazon warehouses, and the fight for union recognition are all linked. These struggles only reinforce each other. A clear and strong denunciation of and fightback against Amazon’s union busting will also put pressure on the NLRB to force the company to recognize the union. But it will also continue to raise the profile of the ALU and inspire the workers and organizers at the hundreds of other Amazon warehouses across the country, building further trust and support for the ALU. But these workers do not have to wait for the state to recognize their union to begin acting as one.

Amazon workers must fight these firings with everything they’ve got. At the same time, local and national unions, especially the rank and file unionists in the NYC labor movement, need to condemn these firings and pledge to support any actions the workers decide to take. Supporting the ALU can also be part of a bigger campaign against union busting and retaliatory firings at other newly organized workplaces, including the host of Starbucks workers who have been fired for their efforts to unionize their stores. ALU has the support of dozens or even hundreds of organizations and unions which would be willing to join the struggle against these attacks. These forces could call for actions at Staten Island facilities, across the city and even nationally. This fight is not only about Amazon workers but all the workers who are putting up a fight against their bosses, trying to unionize their workplaces, and suffering retaliation.

Left Voice stands in full solidarity with these workers in their fight against Amazon and all forms of oppression and exploitation.