As Half a Million Berliners Protest War, Germany Expands Its Military

On Sunday, up to 500,000 people joined a demonstration in Berlin against the war in Ukraine. But it was not exactly an anti-war protest — the organizers, following the German government, were campaigning for increased militarism. 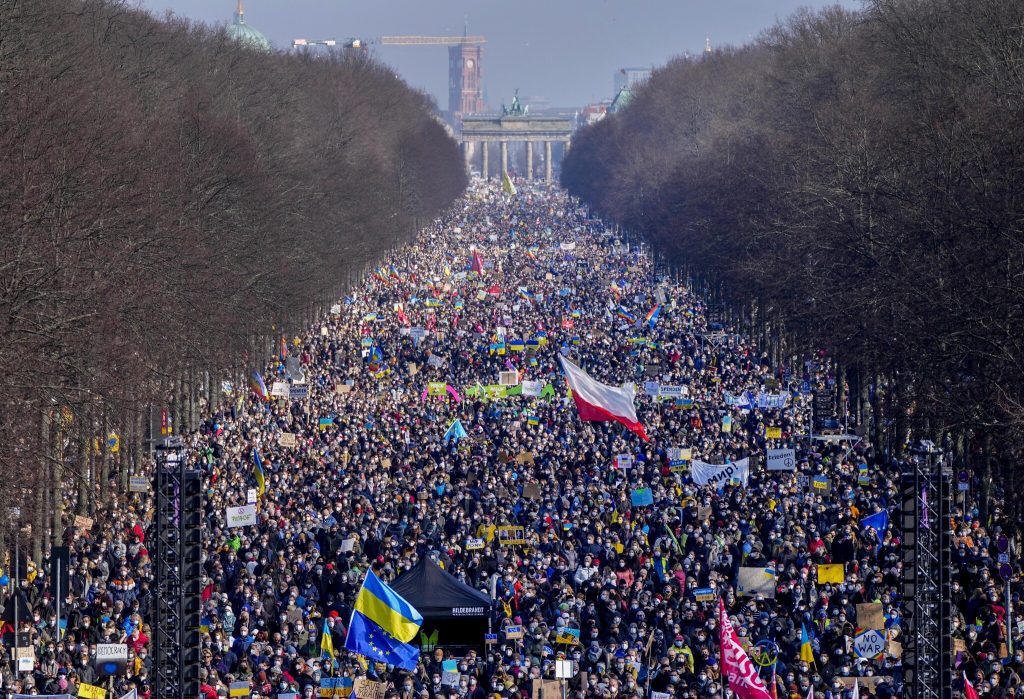 On Sunday afternoon, up to half a million people joined a demonstration in Berlin against the war in Ukraine. The broad avenue between the Brandenburg Gate and the Victory Column was overflowing with people. Many carried yellow-azure flags in support of Ukraine and signs denouncing Vladimir Putin.

The organizers claim there were 500,000 people, which would make this the biggest demonstration Berlin has seen since the protest against the Iraq War on February 15, 2003, which took place in the exact same spot.

But 2022 is very different from 2003. Back then, 500,000 demonstrators were trying to prevent a war, and their main goal was to stop the German government from supporting the imperialist aggression.

Yesterday, however, the main slogans were in favor of militarism. One Ukrainian speaker called on the German government to send more weapons to Ukraine. “Yes,” she said, she was “bold enough to call for weapons at a peace demonstration.” (She even presented this appeal to the German arms industry as an “anti-imperialist” measure!) Other speakers called for additional financial sanctions against Ukraine.

These demands were precisely in line with German government policy. That morning, chancellor Olaf Scholz announced Germany would support the exclusion of Russian banks from SWIFT, the global system that connects financial institutions.

And in a historic move, the coalition of social democrats, Greens, and liberals announced they would pay an additional €100 billion ($112 billion) to the Bundeswehr, Germany’s armed forces. The current military budget is €50 billion ($56 billion) per year.

The Federal Government had not organized the demonstration themselves — they could rely on NGOs, churches, and other organizations of “civil society” to push for more militarism. A representative of one of Germany’s state-funded churches had pious words about “God hearing the voices of peace.” But the speakers were largely pushing for more aggression against Russia.

Particularly disturbing was the speech from Frank Werneke, top bureaucrat of the service sector union ver.di. In the name of organized labor, he called for additional sanctions against Russia. Unions need to be fighting for the unity of workers across borders — and not to punish workers in the Russian Federation for the actions of their gangster government.

Sanctions are often presented as a peaceful alternative to military measures. But while an exclusion from SWIFT does target Russian banks and oligarchs, who engage in financial transactions across borders, those oligarchs have plenty of capital at home. Other sanctions will be felt primarily by the Russian masses in the form of inflated prices, potential shortages of basic goods, and so on.

Financial sanctions, carried out by the world’s richest countries, are just another form of imperialist violence.

One particularly baffling argument came from the leader of Greenpeace in Germany. He said that sanctions against Russia would lead to less natural gas consumption in Germany, which would then speed the transition to renewable energy. This is incredibly cynical: he is willing to sacrifice a few thousand Slavs to get more subsidies for German companies producing wind turbines? It’s also unrealistic on a purely technical level. Militarization is extremely environmentally destructive; in fact, the U.S. military is among the world’s biggest emitters of CO2. Billions in new military spending won’t be carbon-free.

The demonstration on Sunday was an excellent example of what Antonio Gramsci called the “integral state”: the capitalist state relies on semi-autonomous bureaucracies to manufacture consent and reinforce bourgeois hegemony.

Most people at the demonstration were horrified by scenes of war so close to home — Kyiv is just 1,200 kilometers (750 miles) from Berlin. Yet this genuine yearning for peace is being manipulated and transformed into support for militarism. Thus we had the tragic scene where working-class and poor people in Berlin were cheering for demands that untold billions be given to arms manufacturers.

The bureaucrats reminded people that sanctions would lead to hardships in Germany as well, in the form of increased energy prices and general inflation. But they said this was a small price to pay for “freedom.” One thing is clear: these millionaire bureaucrats won’t be renouncing their salaries in the spirit of “shared sacrifice.”

Despite what numerous speakers claimed, NATO offers no protection against war in Europe. Quite the opposite: NATO led the wars against Serbia in 1999 and against Afghanistan in 2001. Increased militarization as demanded by NATO will only lead to new wars.

A genuine anti-war movement needs to be independent of the German state and the bureaucracies that support it. We oppose Putin’s reactionary war, but this does not mean we support the imperialist governments united in NATO.

The only way to stop imperialist wars is to build up an independent workers’ movement that fights for socialism. By breaking with capitalist governments, we can create unity with the working class in Russia, Ukraine, and all over the world.