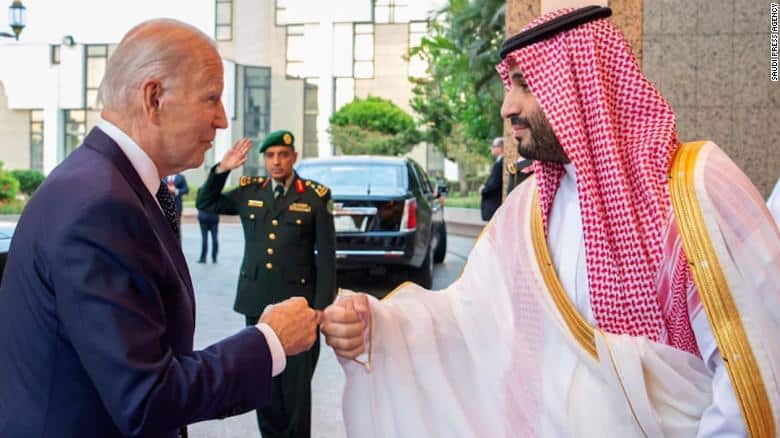 The Middle East has regained relative importance for the United States. The region is key for containing energy prices and maintaining trade routes, as well as for shoring up the United States’ historical allies to contain China, with its Belt and Road Initiative, and Russia, which has occupied the “empty spaces” left by the U.S. withdrawal from the region, as in Syria.

After he landed, one of Joe Biden’s first remarks was “You need not be a Jew to be a Zionist,” expressing his full support for the racist discourse that ideologically sustains the Israeli occupation. Israel seeks universal recognition of its colonialist policy in Palestine, as well as its occupation of territories in Jordan, Egypt, Syria, and Lebanon. Biden arrived in a region facing great challenges that directly affect the interests of U.S. imperialism, which seeks to extend NATO policy and weaken Russian, Chinese, and Iranian influence. Among other problems, the Middle East is suffering the direct consequences of rising food prices, which has spurred several revolts and mass protests in the region, from Sudan to Lebanon to Iraq.

Resolving these challenges to U.S. imperialism requires increasing oil supplies, alleviating the growing tensions between Iran and Israel, and reaffirming the United States’ strategic alliance with Saudi Arabia in the context of the energy crisis. This brought about an uncomfortable meeting with Saudi Crown Prince Mohamed bin Salman, whose country Biden once considered a “pariah” for its abysmal human rights record, particularly after the gruesome murder of journalist Jamal Khashoggi in Turkey in 2018.

Biden is seeking to achieve his strategic objectives by implementing several policies. On the one hand, he is betting on regional integration among his allies — with the United States as mediator — contributing to progress in Israel’s relations with Saudi Arabia and other states of the Persian Gulf, which were accelerated through the Abraham Accords. Biden was able to get Saudi Arabia, which has not yet normalized relations with Israel, to open its airspace to civilian carriers, including unrestricted flights for Israeli airlines. Saudi Arabia will also allow direct charter flights from Israel for Muslims participating in the annual hajj pilgrimage to Mecca. In a pledge to Israelis, Biden also indicated that the U.S. would restrain Iran in its quest to build nuclear weapons, even if doing so requires military force. This leaves the door open to moving forward on the Iran nuclear deal, which President Trump discarded in 2018.

On the other hand, Biden avoided making deep commitments that could drag the U.S. back into a fragmented and chaotic region, the product of decades of imperialist military interventions and civil wars. Israel and the Arab states will likely approve of what the U.S. president has to offer, but they are well aware of their diminishing political value on a global scale. For this reason, Iran is particularly relevant, since it may help align the policies of U.S. allies.

The Visit to Israel

Israel has been under a caretaker government headed by Yair Lapid since last month, when the multiparty coalition collapsed. While Biden’s visit is an opportunity for the interim prime minister to demonstrate his diplomatic skills, Biden also met with Likud’s Benjamin Netanyahu, who has a chance to return to power in the country’s fifth election in two years on November 1, although it is unclear so far if his right-wing alliance will achieve a majority in parliament to form a government.

In the joint statement signed between Lapid and Biden, the U.S. pledged to counter Iranian efforts to pursue nuclear weapons, but also the Palestinian-led global Boycott, Divestment and Sanctions (BDS) movement against Israel, which carries a lot of weight in U.S. domestic politics. In recent years, more than 30 U.S. states have passed legislation requiring state contractors to sign a pledge not to boycott Israel, which the BDS movement has been fighting.

In his meeting with President Mahmoud Abbas, Biden promised more aid for Palestinians, including $15 million in emergency aid to help with grain shortages caused by the invasion of Ukraine. Biden says that since he took office in 2021, his administration has restored $500 million in aid to the Palestinians, including funds for UNRWA (the UN agency for Palestinian refugees), which had received about $350 million annually in the Obama era. But this sum contrasts with the $3.8 billion in aid to Israel, primarily for its military. During the meeting, Biden also said that “the United States will continue to insist on a full and transparent accounting of [Shireen Abu Akleh’s] death and will continue to stand up for media freedom.”

The elephant in the room was the so-called Israeli-Palestinian conflict. For the United States, Palestinian self-determination — to which it has always only paid lip service — is now increasingly being left off the agenda as several Gulf monarchies normalize their relations with Israel. This normalization could help negotiate interregional security ties that do not depend on the U.S. in the long term, allowing the U.S. to focus on other areas of the globe.

Back to the Middle East

The Middle East has been the world region most neglected by the Biden administration. Since taking office, he has instead focused on Asia, the pandemic, the United States’ internal polarization, and, now, the war in Ukraine. The withdrawal of U.S. troops from the Middle East is linked to the Obama administration’s shift in economic and military strategy toward containing the rise of China, which has already become a major investor in the region, both in Israel and in other countries.

Biden’s objectives are also focused on oil prices and on containing Russia — specifically, on encircling Russia with NATO in Eastern Europe. In this sense, the U.S. president’s strategy has also taken into account the fact that in exchange for Turkish support for Sweden and Finland’s incorporation into the alliance, the Erdoğan regime will have carte blanche to continue ethnically cleansing the Kurdish population within its territory and across the border into Syria and Iraq.

The global energy crisis, sparked by Russia’s invasion of Ukraine, has made the energy supply to Europe and other regions of the world vital, particularly for the United States. Although the U.S. is a net exporter of energy, the country is not immune to global energy prices. These price increases are one factor behind the United States’ high inflation rate, which today exceeds 9 percent. The fear of a crisis similar to that of 1973 looms large in the memory of the U.S. bourgeoisie, and the country’s relationship with OPEC+ is central. As one of the world’s biggest oil producers, Saudi Arabia is a central player in that organization and is in a strong position to compensate for the Russian oil production lost due to the crisis in Ukraine and the related sanctions.

However, Saudi commitments to pump more oil in response to Biden’s visit are too small to reduce the price in the short term. Moreover, energy analysts expect global demand to outstrip supply in the long term. If that trend continues, sustained high prices are built into the world’s economic future, and the relatively minor adjustments made by the Saudis in exchange for U.S. favors will provide little comfort to Americans. As a result, the royal family might raise the price of the deal — “arms and security for oil” — that has been repeatedly renegotiated since the USS Quincy meeting in 1945 between President Franklin Delano Roosevelt and Saudi King Ibn Saud, which sealed the U.S.-Saudi alliance.

Riyadh is therefore unlikely to accept significant production increases beyond those it is already planning in agreement with its OPEC+ partners, including Russia, and for the kingdom’s own economic objectives. Another problem is the capacity of Saudi wells and refineries, which will likely peak at 11 million barrels per day. Saudi Arabia has been holding firm to the agreement with OPEC+ on keeping oil prices high through a voluntary move by members to limit production. In this regard, Saudi Arabia will maintain its alliance with Russia.

At the same time, the Saudis view the United States’ security over the Gulf monarchies as weak, after the tepid U.S. response in March to the Houthi drone attacks on Abu Dhabi National Oil Company facilities in the UAE in January and on a Saudi refinery of ARAMCO — the world’s most lucrative energy company and one of the most capital intensive companies globally. This perception has prompted countries in the region to seek alternatives to new engagements in a multipolar world, with actors who have overlapping interests.

Saudi Arabia has been steadily deepening its economic ties with China, with a focus on oil and, increasingly, trade and military cooperation to balance the kingdom’s dependence on the United States. Biden returned to the region aiming, in the short term, to fragment the ties that allowed Middle Eastern countries some autonomy in their relationships with China and Russia, and to limit these latter countries’ influence. But at the same time, Biden’s trip aimed to counteract the decline of U.S. imperialism itself.

Originally published in Spanish on July 14 in La Izquierda Diario.

Translation and adaptation by Otto Fors