Books and Barricades: The Revolt in Brazilian Schools

More than 1,000 high schools and universities are currently being occupied by Brazilian students. Why are they occupying and what can this tell us about the current political situation in Brazil? 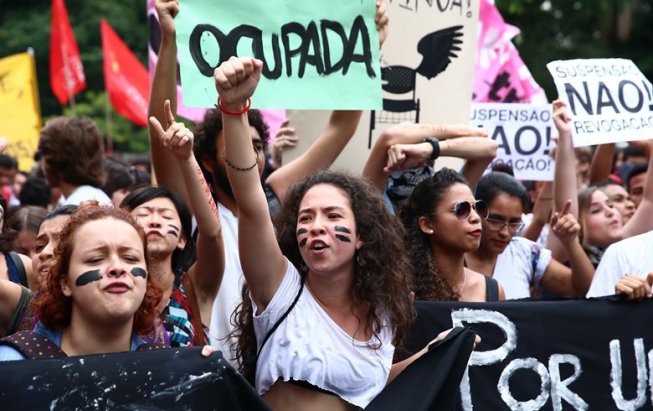 At this moment, in Brazil, there are over 1,000 high schools and universities currently occupied by students. Occupied schools are completely student-run; young protesters have taken up residence,organizing everything from cooking and cleaning to classes and activities. There are also over hundreds of universities being occupied and on strike. The occupations began in the southern state of Paraná, where over half of the public high schools are currently occupied. Teachers in the state are also on strike in protest of draconian austerity measures proposed by the government.

However the movement does not end in Paraná; 22 out of Brazil’s 26 states have at least one high school or university currently under student occupation and at this time, over half of Brazil’s federally run universities are being occupied by college students. The student assemblies that vote for the university occupations are among the largest in recent Brazilian history; at the University of Brasilia, in the capital of Brazil, over a thousand students gathered to vote for the occupation. 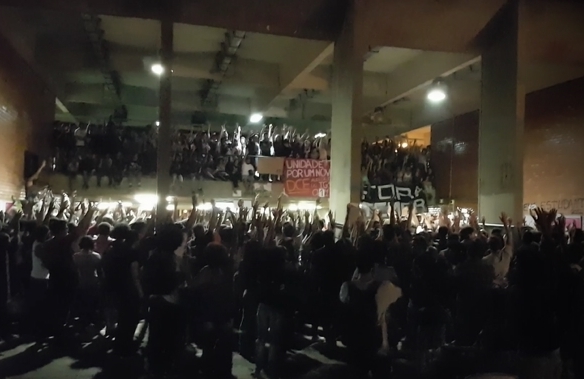 The University of Brasilia votes for a student strike and occupation. Image from Esquerda Diario.

That these widespread protests haven’t made the news is no surprise. The lack of coverage is the result of a clear media blackout in Brazil, combined with a lack of interest by U.S. news outlets. But the message is undeniably clear: amidst a rightward swing in electoral politics, these strikes and occupations show that teachers and students are ready and willing to fight for their rights rather than passively accept government attacks. To understand the current occupations and their political possibilities, one must understand the role that occupations have come to play for Brazilian youth, as well as the current Brazilian political context.

Occupations- A Tactic for Youth Resistance
Since December 2015, high school occupations have sprung up throughout Brazil. When the governor of Sao Paulo threatened to “reorganize” high schools, closing 90 of them, students in Sao Paolo swiftly organized protests in the streets. When that was insufficient to block the measure, students occupied over 200 schools across the state. Demonstrators formed a commission with representatives from all occupied schools, and continued organizing streets protests, blocking traffic on a daily basis. In the end,the governor was forced to give in to the demands of the high school students, maintaining all 90 schools open. 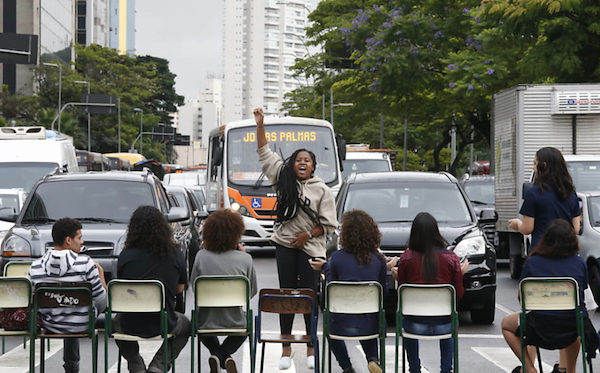 Students take to the street in Sao Paulo against school closings. Image from Esquerda Diario.

A wave of high school occupations followed in Rio de Janiero in support teachers striking for better school conditions. Students and teachers pointed to the fact that the government spent millions on the Olympics, but refused to invest in education. Results for the occupations varied, but for the most part, protesters’ demands were not met.

A Right-Wing Coup and a Rightward Swing
On August 31, a right-wing coup was formalized and Dilma Rouseff of the Workers Party (Partido dos Trabalhadores, or PT) was ousted from the Presidency. Vice President, Michel Temer of the PMDB, or Brazilian Democratic Movement Party then took office, with the support of right wing Congress and intention of “solving” Brazil’s economic crisis via austerity and privatization. The formal charges against Rousseff were for corruption, although 352 out of the 594 members of the Congress who voted for impeachment are themselves under investigation for corruption–over 60%. Though Former President Dilma, has yet to be found guilty of corruption, she was still impeached: a move driven by the Brazilian right wing, in a push for swifter implementation of austerity measures and privatizations. The PT began implementing these policies prior to President Dilma’s impeachment, but their base in the working class presented roadblocks to privatization.In the end, the coup succeeded with little resistance from the PT.

Though the PT was born in the 1980s from the famous labor strikes in the industrial outskirts of Sao Paulo by 2016, the party refused to mobilize the working class against the coup. Despite a history of organizing much of the Brazilian working class in the country’s largest labor union, so-called “protests” against the recent takeover consisted of little more than participants watching speakers onstage, while at the same time attempting to negotiate backroom deals with the right wing to remain in power. They refused to call strikes against the coup, resulting in a new right-wing government that will make sure that the working class pays for the economic crisis.

The PT’s attempts to play both sides proved unsuccessful, as not only was Rouseff impeached, but the PT suffered a crushing defeat in recent midterm elections, falling from the third political force in the country to the tenth. A record number of extremely right-wing candidates were voted into office. For example, in Curitiba, the capital of Paraná (where over half of the high schools are currently occupied), the recently elected mayor declared that the smell of poor people makes him want to vomit. Despite his open disgust for a huge portion of the Brazilian population, he was still voted into office.

Cuts and Austerity to Education: What are the Occupations Fighting Against
The new right-wing government has not wasted any time attempting to pass severe policy changes, the brunt of which have fallen on the education system. Recent protests are primarily in response to two measures: MP 746 and PEC 241. MP 746, cuts, among other things, classes in philosophy, sociology, art, physical education and foreign languages from the high school curriculum. It also seeks to de-professionalize teachers, making a teaching license optional. PEC 241 is a plan to freeze education spending (as well as spending in welfare programs and health care) for the next 20 years. In Paraná, the teachers are on strike against PEC 241.

Many students also speak out against the right wing coup, under the slogan “Fora Temer”, or “Out With Temer” (the coup President). Others also speak out against Escola Sem Partido (Schools without political parties), a law that would limit political debate and discussion in the classroom, threatening to fire teachers who discuss politics in the classroom.

Inside Occupations
Although there are widespread occupations from high schools to universities,they all have some general points of similarity. Decisions are made via student assemblies, which organize the occupation. Students are living at their schools, so they are in charge of cooking, cleaning and all activities. Often, they invite community organizations to run workshops in their schools, discussing racism, gender, sexuality, integrating art and sports to the curriculum as well. Although support from teachers varies, at many schools, teachers volunteer time, energy, food and money to keep the occupations going. The surrounding community also donates food and often volunteers to help out at the occupations. 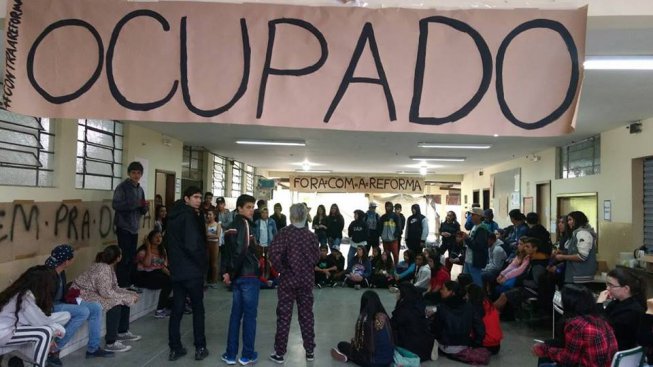 Students gather for an meeting. Image from Esquerda Diario.

In spite of the purposeful lack of media coverage, students are still getting the word out by taking to social media to chronicle on their struggle. Students regularly post updates on the protests, and several satirical music videos in which lyrics of popular songs are changed to messages about the occupations and against the government.

In Paraná in particular, the number of high school occupations has decreased in the past weeks due to police repression. The courts have issued orders to remove students, often detaining them. In some cases, the judicial branch positions themselves to the far right, with a court in Brasilia sanctioning such forms of torture as playing loud music outside one school to prevent students from sleeping. At this same school, 150 military police surrounded the building, under orders to prevent anyone from entering–including those delivering food to protesters, or parents visiting their children at the occupation. Students at this school chose to leave the occupation before the police were able to implement the full extent of tactics that the courts allowed. While this is one extreme example, this sort of repression has resulted in a decrease in the number of high school occupations, although university occupations are on the rise. 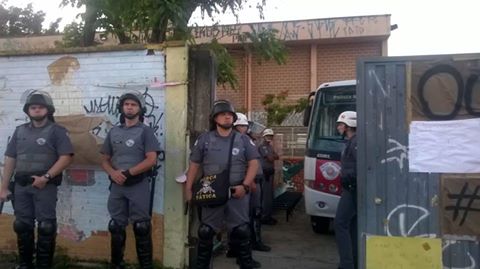 Police enter a school in Paraná to retake control of the school. Image from Esquerda Diario.

Youth Showing the Way Forward
Recent electoral politics in Brazil seemingly indicate a rightward shift in the country. However, these 1,000+ occupations around the country say otherwise. They are a clear sign that young people are willing to rise up against the austerity measures and fight against them. These young people are an inspiration for the working class, encouraging others to enter into the struggle, such as the teachers in Paraná, and teachers and students at universities across the country workers who are currently on strike. They show that a real political resistance to right wing politicians is possible and desired; it is a question of organizing and uniting the discontent. These occupations also point the way towards the kind of education that is possible if it is in the hands of students, the community and teachers. 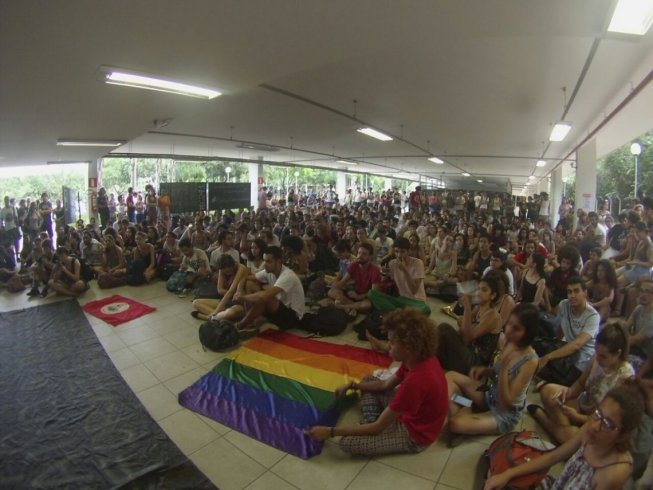 Students gather at an assembly at the University of Mina Gerais. Image via Esquerda Diario.