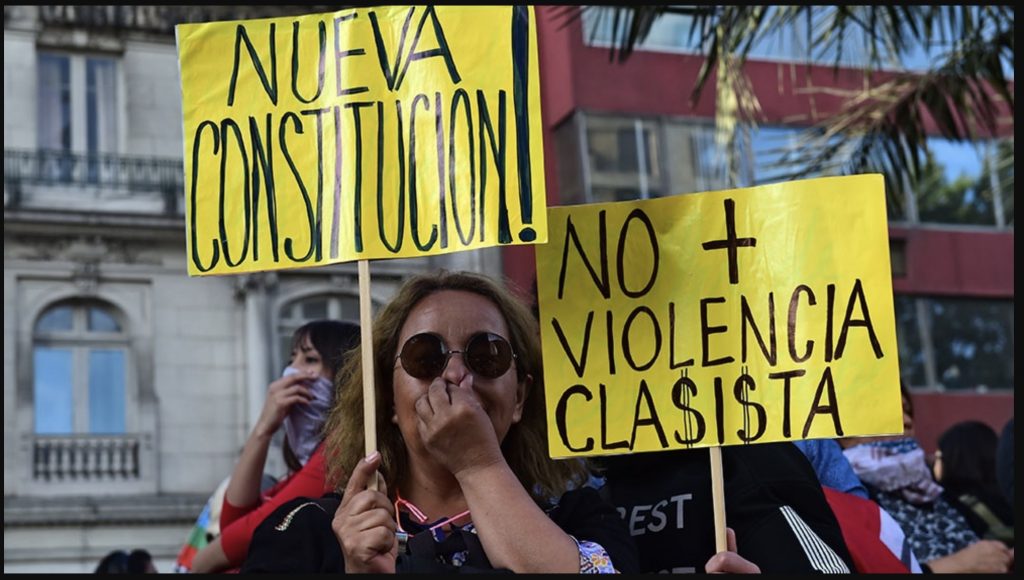 The proposed Chilean constitution was rejected by a surprisingly large margin. Why?

To understand why it was rejected, it is necessary to go back to 2019, to the peace agreement and the constituent assembly. On November 12 of that year, we had the most important national strike in 40 years. Millions marched against the Chilean neoliberal system and there were important strikes of several sectors of workers. The political system was brought to its knees. Even analysts, traditional politicians, and journalists suggested that if the November 12 strike call were extended any longer, President Sebastián Piñera would fall, and yes, the political caste would fall with him.

Three days later, the traditional parties, including sectors of Frente Amplio1Frente Amplio, or “Broad Front,” is a coalition of several organizations, ranging from left-wing groups to the Liberal Party, which had officials serving in Piñera’s first government. It was launched by the main leaders of the 2011 student movement, Giorgio Jackson and Gabriel Boric, who back then also diverted the mobilizations to the traditional institutions and the ballot box. and then-Deputy Gabriel Boric, signed the “Agreement for Peace and a New Constitution.” This pact guaranteed impunity for Piñera, who was responsible for systematic violations of human rights. It also delivered a constituent process subordinated to the institutional powers and to the rules of the game of the powerful. The process left in place all the main pillars of the neoliberal regime, and gave veto power to the neoliberal sectors. Thus the regime as a whole, including Boric, rejuvenated the right wing and a government that was about to fall.

How was it that just six months after the Left won the presidential elections, the draft constitution could be rejected so decisively?

Three years after the initial uprisings, Boric came to power with high expectations, which were quickly deflated. He integrated the former Concertación — the Chilean social democracy — into the cabinet. He militarized the Mapuche lands with a state of emergency. Boric’s right-wing politics boosted the Right. Meanwhile, the constituent assembly did not provide solutions to the most urgent demands of the people; the demands for pensions, healthcare, and free education have not been resolved. The political cycle is not closed.

Did the rejected draft of the constitution meet these demands?

The draft constitution did not touch the pillars of the big capitalists in Chile. It did not touch the AFP, the privatized pensions. What’s more, analysts said that the new constitution could “raise new business possibilities.” The new constitution only talked about the freedom to choose between public and private health care, which also works with public subsidies. The government gave guarantees to private companies that their businesses would continue to function. And the constitution did not solve the problem of education in Chile, which is one of the most expensive in the world. Now, we can see a new student movement mobilizing for a better education.

Was the vote a rejection of the leftist ideas of a minority of the population?

That is the interpretation that the Right is pushing, and that has even been taken up not only by the former Concertación but also by the government itself. But the truth is that the demands for education, free public health care, decent pensions, no more AFP, and the challenge to the dictatorship’s legacy are still open in a certain way. What really failed was the line that by playing by the rules of the powerful, accepting the Peace Accord, and taking the institutional route, we could put an end to Pinochet’s legacy and achieve a deep, lasting political transformation. But we must fight for another way.

In this context, Boric’s government accepted the right wing’s framing, and is strengthening this path of a new pact from above among the traditional parties for a new constituent process proposal. This process will be even more antidemocratic, supervised by a committee of “experts” and under stronger control by the parties that represent the interests of business.

Many people view this recent defeat at the polls as a historic defeat that is setting the left back decades. What do you think?

The sectors of the Left that were under the illusion that the new constitution could put an end to neoliberalism are very demoralized. For me, this is not a defeat of the Left, but a defeat of the illusion that the struggle against the legacy of the dictatorship can be taken from the streets to parliament. To break with this legacy, it is necessary to confront the interests of big capital in Chile, which neither the Boric government nor the constituent assembly were willing to do. The Left can be strengthened if it draws lessons from this process for the next struggles, which will come sooner rather than later. That is the perspective that we fight for — a Left of class struggle that is revolutionary, internationalist, and socialist.