Capitalist Governments Say: Shelter in Place — and Go to Work!

In many European countries, the police can fine or arrest you for meeting with friends in a park. But we are still expected to spend eight hours in an office with tens or hundreds of other people. Governments in Germany, France, Italy, Australia, and to some degree, the U.S. are all practicing this seemingly contradictory policy. They are defending capitalist profits, not people’s lives. 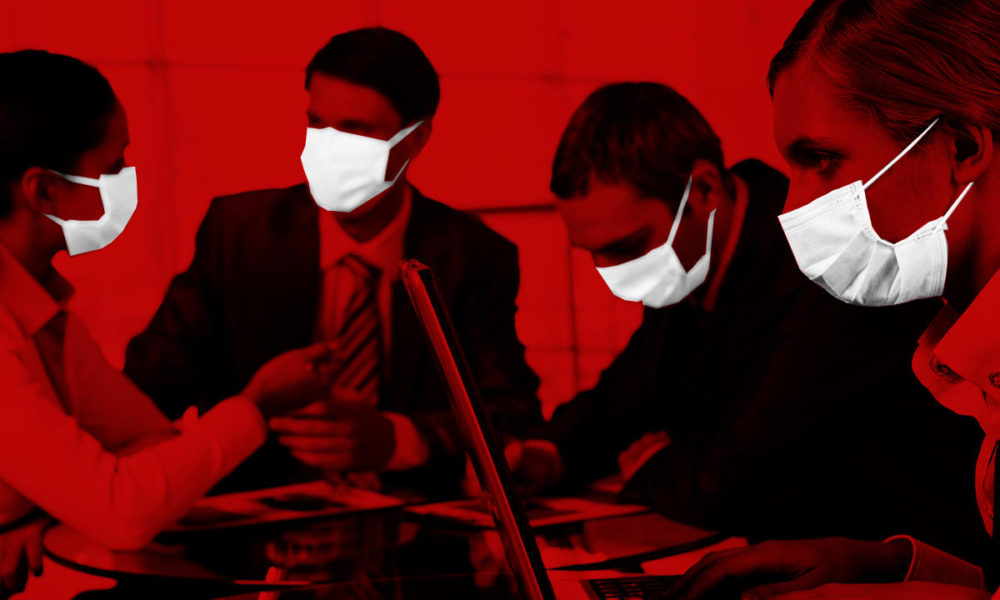 Since Sunday, Germany has been on lockdown. The federal and state governments prohibited gatherings of more than two people. In Berlin, where I am writing this, people are required to carry government-issued identification including their address at all times.

We are still allowed to go to the supermarket or the pharmacy, or take a walk, but other than that we are supposed to stay at home. All schools have been closed since March 17. Bars were all shut down three days before that. These are drastic but important measures to slow the spread of the coronavirus.  Social distancing is necessary to stop the spread.

There is one huge exception, however: People are still allowed and expected to go to work. While many people are working from home, countless others are still commuting to an office or a factory, which is why buses and subways are still running. This includes essential workers, such as healthcare or supermarket workers, but it also includes thousands who are being forced to come into the office and do not know why.

This policy appears completely irrational. The police can fine or even arrest three people sitting together in a park because they could spread the virus. So how can it be acceptable for tens or hundreds of people to sit together in an enclosed space for eight hours working for corporate profits, not to fight the pandemic? Are the German authorities working on the assumption that the virus will only infect people in their free time? But Germany’s absurd policy is no exception. Many countries are responding to the crisis with similarly contradictory and ineffective decrees.

France has similar policies, but is enforcing them with the iron fist of a police state. People can only leave their home for only one hour per day, staying within one kilometer of their address. They need to print out a certificate describing what they are doing. Police are everywhere, and they might even check a person’s groceries to see if they consider the shopping “essential.” Police fined over 4,000 people on the first day of the lockdown —  135 euros a pop. President Emmanuel Macron built up this repressive apparatus to fight the Yellow Vests rebellion. Despite these harsh rules, however, French workers are still being sent to work. Airbus, for example, keeps producing airplanes — taking masks for the factory floor that are desperately needed in hospitals.

Italy went on lockdown on March 9. But it wasn’t until March 21 that the government of Prime Minister Giuseppe Comte declared the closure of all nonessential businesses. So for two weeks, the entire country was told to stay at home and practice social distancing — and simultaneously to go to work! But even the decree that now supposedly stops production is a joke. The government, responding to the pressure of the capitalists’ association Confindustria, has declared whole sectors of industry “essential” even though they are not producing materials to help with the crisis, including plastic, coal, chemistry, and rubber. Even call centers, where workers are pressed together in cubicles for hours on end, have been deemed “strategic.” In Italy, there have already been strikes to shut down auto factories and other sectors that no reasonable people would consider “essential” in a pandemic. Today there is a general strike in Italy to shut down all production.

The United States has no consistent policy, but states like New York and California have gone on lockdown. In the states, the lockdown is much more lax than in Europe and non-essential work continues.  Companies have been trying to declare themselves “essential” and force their employees to come into work despite the health risks. Even Starbucks, a company worth $66 billion, wanted employees to keep making “essential” coffee, while Tesla refused to shut down its “essential” car plant for almost a week. Despite projections that the worst of the pandemic will last well into April, Donald Trump’s plan is to open up all non-essential businesses by Easter.

These policies might sound wildly irrational: capitalist governments want people to socially distance in their free time — but to work together in close quarters on the job. But this corresponds to the logic of capitalism. Governments are ultimately not interested in protecting public health. Their job is to protect the profits of a tiny minority who own the means of production.

So the question is: who can, and who should, decide what is “essential” or not?

The answer is simple. Workers themselves know whether the risks are necessary for society. Tellingly, most healthcare workers are not only continuing to work, but doing long shifts in dangerous conditions. Workers producing protective gear and disinfectant around the world are also working overtime.

It is the workers at a Starbucks or an office or a factory who can decide if it is necessary for them to risk spreading the infection in order to save lives. That is why we don’t need capitalist governments making decisions about what production is “essential.” We need workers’ control of production so working people can make these decisions collectively.

Workers at the big U.S. auto plants decided that manufacturing cars was not essential, and shut down their industry with wildcat strikes. But if these same factories started producing ventilators or other necessary equipment, we can be certain that these same workers would show up and equip themselves with the necessary protective gear.