With the yellow vest movement in France and the uprisings against pro-imperialist dictatorships in Algeria and Sudan, the oppressed have burst onto a tumultuous international scene. 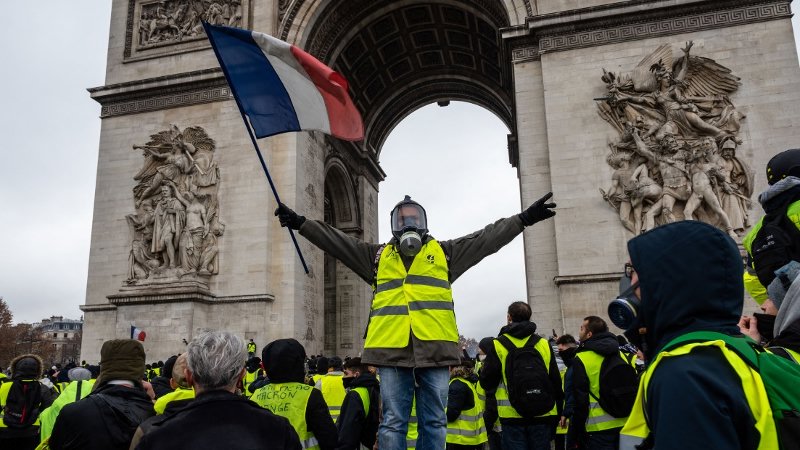 The capitalist crisis of 2008 generated economic tensions and political instability that are still reverberating internationally. These tensions intensified after the election of Donald Trump as U.S. president, and in the last year, they have further intensified in the context of a growing global economic slowdown.

We are now at the beginning of a transitional period in which major conflicts between states and classes are in the making, as suggested by several indicators: the insurmountable Brexit crisis, Trump’s trade war with China and the European Union, the nationalist tendencies in central countries, the prospect of a conflict between world powers, the crisis of traditional parties, the social polarization and the emergence of new political and ideological phenomena both on the right and on the left, and the more radical tendencies of class struggle.

In other words, the international situation is characterized by tendencies toward an organic crisis—that is, a crisis of bourgeois hegemony—in several countries, including imperialist powers. This situation entails both attempts by the bourgeoisie to resolve the crisis with right-wing Bonapartist governments—like that of President Jair Bolsonaro in Brazil or that of Trump himself—as well as the radicalization of the exploited in their struggles and their political responses to attacks by the capitalists. This is what we are preparing for.

In Latin America, we are experiencing an offensive aimed at recolonization by U.S. imperialism, which is trying to take back lost ground in the context of the economic advance of China in the region. The Trump administration relies on the governments of the pro-imperialist right that now practically control the Southern Cone to bring what it views as its “backyard” in alignment with Washington. Meanwhile, it has attempted other kinds of pressure to deal with the so-called progressive government of Andrés Manuel López Obrador in Mexico.

The most salient expression of this policy is the attempted coup in Venezuela, planned jointly by the local right led by Juan Guaidó and by the U.S. government. This attempt was supported by the Lima Group, which includes the governments of the South American right and Canada. Meanwhile, the IMF has made new encroachments into Argentina; under the administration of Mauricio Macri, the country is now subject to the tutelage of the IMF and austerity plans in the service of global financial capital.

But in a context in which the coup offensive in Venezuela has so far been unsuccessful, the governments of the regional right are encountering limits. They have been unable to achieve stability and change the balance of forces in order to implement the counter-reforms demanded by the capitalists. Even Bolsonaro’s administration, the most right-wing in the region, is plagued by disputes between the various sectors that make up its coalition, and it has lost much of its popularity, although these divisions among the elite have not led to a rise in active resistance by the masses. The inaction of the union bureaucracies—linked to forces such as the Brazilian PT or Kirchnerism in Argentina—has also been essential to limiting the response from below.

In general, these right-wing governments have been advancing in a more or less coordinated fashion with neoliberal measures that entail intensified attacks on the living conditions of the workers and the poor, mainly via labor and pension reforms. But they have not yet achieved a favorable balance of forces to carry this out, meaning that the main battles are still to come.

In our struggle against imperialism and its regional agents, the Trotskyist Fraction – Fourth International (FT-CI according to its initials in Spanish) is promoting an energetic anti-imperialist campaign against the coup in Venezuela, without offering support to Maduro’s repressive government, as well as opposing the embargo on Cuba and any further kind of imperialist aggression against the island. 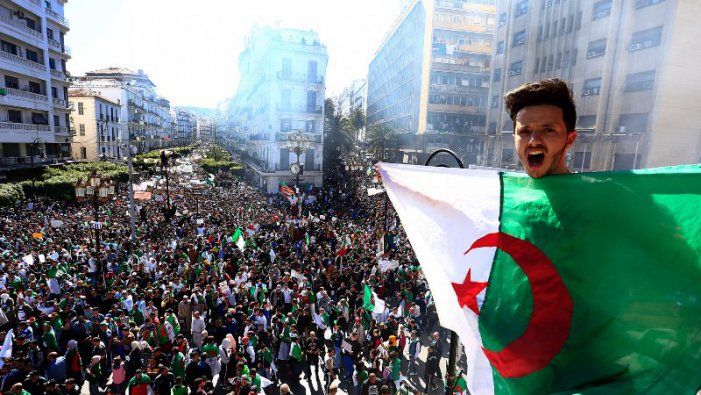 The rebellion of the yellow vests in France is the world’s most important process of class struggle today. It is a new element that has led to a qualitative shift in one of the main imperialist powers. Its emergence took the country’s political parties by surprise, and its methods have at times been radical. In the course of its development, it went from making partial demands to demanding Macron’s resignation, and it has achieved significant social support.

It is, however, a socially and politically contradictory movement. Although it is composed mostly of salaried workers, the rebellion has not included concentrated and organized sectors of the workers’ movement, and it has not used working-class methods of struggle, such as general strikes. The bureaucratic leadership of the working class has played a nefarious role in this respect, preventing unity between the yellow vests and unionized workers. In this context, in certain places, there have been tendencies toward democratic coordination, most notably including the national assemblies of Commerce and Saint-Nazaire, although they have remained an exception.

As a movement of struggle, it is now in retreat. The participation in the Saturday mass actions has declined, as these actions have been carried out for several months and have faced fierce repression. Even so, it continues to maintain strong mass support, despite Macron’s maneuvering with his so-called “great debate” and despite the upcoming elections for the European Parliament.

While the extreme right, led by Marine Le Pen, attempted to capitalize on the movement at its inception, former presidential candidate Jean-Luc Mélenchon and his “populist” movement La France Insoumise have been powerless in changing its direction. In this context, in which a strategic battle must be waged to win over the best of the movement’s vanguard for the socialist revolution, the parties of the extreme left have unfortunately not lived up to the challenge and have maintained a routinist policy.

But it will be difficult for Macron to put an end to such a deep-rooted movement, which expressed the structural demands of a sector that has been marginalized for years and that exists in every imperialist country. This is why many have said that yellow vests are everywhere, as a consequence of neoliberal globalization. And most importantly, it is an experience that can be reproduced with even greater intensity in response to future attacks.

This shift in the class struggle in an imperialist country, which may be the start of an important shift in the international situation as a whole, has made Europe one of the main centers of activity for the organizations affiliated with the FT-CI.

“Millennial Socialism” in the Heart of Global Capitalism

The United States is the epicenter of one of the most interesting political-ideological phenomena, what The Economist has called, “millennial socialism.” In the heart of the capitalist system, a majority of young people aged 18 to 29 favor “socialism” over capitalism. This phenomenon started before the 2008 crisis, but exploded with Bernie Sanders’ 2016 campaign. Today it is expressed organizationally by the Democratic Socialists of America, which has grown from 5,000 to more than 55,000 members since Trump took office. This shift to the left of broad sectors of the population was also expressed in the 2018 midterm elections, in which Alexandria Ocasio-Cortez emerged as a political figure.

The main political representatives of this new socialist movement are Sanders and the leadership of the DSA. Both are trying to keep this progressive trend within the boundaries of the Democratic Party, one of the two imperialist parties of the U.S. regime, which has historically co-opted the movements that arise on its left to prevent them from radicalizing. This happened during the civil rights movement and during the movement against the Vietnam War.

This ideological left turn of the youth, in the United States in particular but also in other imperialist countries such as Great Britain, is very important because it may anticipate more radicalized processes of political and class struggle.

To prevent this movement from being co-opted, it is essential to fight against neoreformist strategies, which are nothing more than a senile copy of the old social democracy. Against the policy of supporting candidates within the Democratic Party, as proposed by the leadership of the DSA, it is paramount to build an alternative: a revolutionary Marxist tendency based on working-class independence. 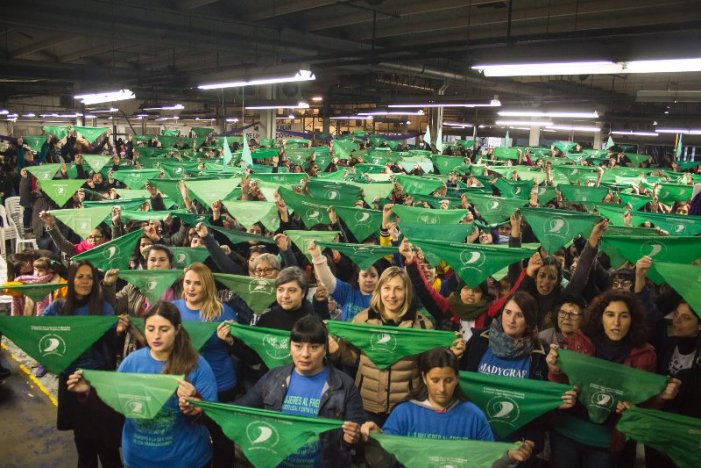 The Emergence and Consolidation of the Women’s Movement

The women’s movement continues to be an important political force and, up to now, the only one that is truly international. Anywhere there is class struggle, there are women on the front lines, such as in the yellow vests movement, in the mobilizations in Sudan and Algeria and in the wave of teachers’ strikes in the United States. These examples lend support to our strategic hypothesis about the vanguard role that women could play in the coming period. Women can be key to revitalizing the working class and wresting the unions out of the hands of the bureaucracy, as well as building revolutionary parties and eventually refounding the Fourth International.

In recent months, Andrea D’Atri, founder of the international women’s organization Pan y Rosas (Bread and Roses) went on a speaking tour around Europe with meetings that were attended by over 2,000 people attracted to our working-class, feminist and socialist perspective. This perspective appeals to the vanguard of the women’s and other social movements, as well as to independent workers, and it can contribute to the construction of revolutionary parties. In part as a result of this tour, branches of Pan y Rosas have been founded in Germany and France, joining the international socialist feminist current that already has a presence in 14 countries.

Internationalism and the Tasks of the Revolutionaries of the FT-CI

The groups that make up the FT-CI intervene in the class struggle in different countries, as well as in ideological and political battles, in order to build revolutionary internationalist workers’ parties. We run the international network of La Izquierda Diario / Left Voice with online newspapers in eleven countries and seven languages, which is the only one of its kind in the Trotskyist movement, receiving millions of visits per month and disseminating revolutionary ideas to broad vanguard sectors of the workers, the youth and the women’s movement. The neoreformist formations that set out to manage capitalism, such as Syriza or Podemos, very quickly became the managers of austerity, in the case of the former, or are preparing to form governments with bourgeois parties, in the case of the latter. We, in contrast, raise the flag of working-class political independence and ending this system of exploitation and oppression. We call for the construction of a new society, one based on the collective ownership of the means of production and on organs of direct democracy of the workers and the masses. We understand, just as Marx did, that the fight for socialism is national in form but international in content.

In this series of articles, we will provide snapshots of the main political and ideological battles that each of the FT-CI’s sections are involved in, as well as their efforts to merge with other left currents, not only through discussion but also through common political work. As part of this policy, we have developed different tactics, including putting forth a proposal to build a Movement for an International of the Socialist Revolution, the Fourth International (MIRSCI).