The unenforceable “pledges” by the world’s leaders to meet a temperature increase that exceeds what climate scientists say is sustainable reveals that, under capitalism, profit and exploitation will always come before human life. 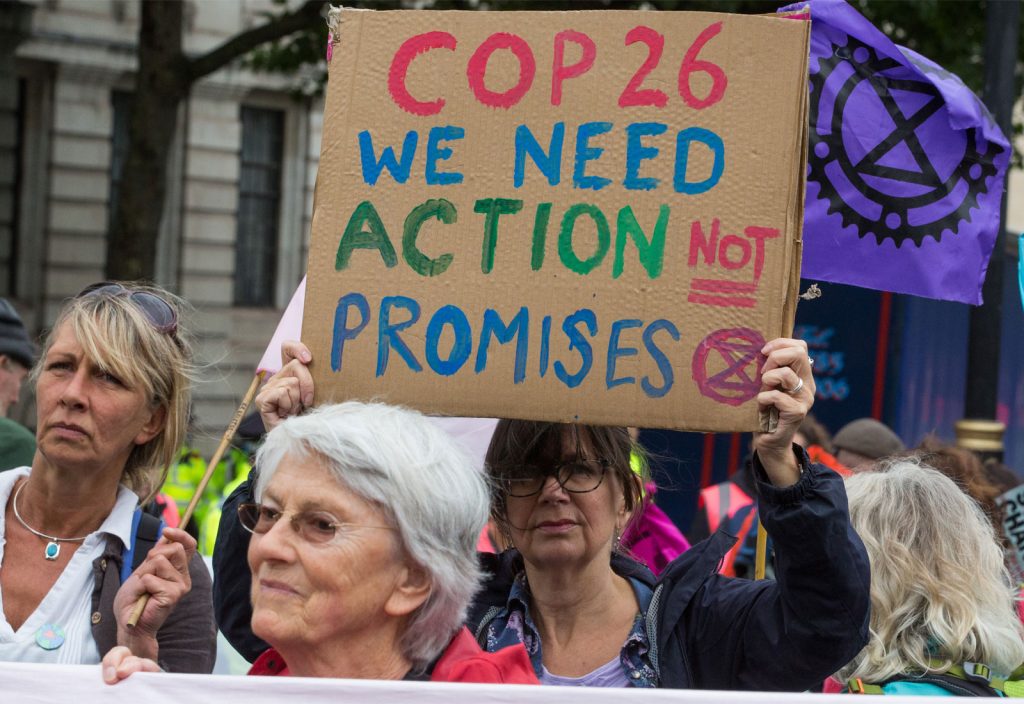 Only halfway through COP26 in Glasgow, Greta Thunberg described the climate summit as a “failure.” It’s difficult to find fault with this assessment. How else can we describe a summit that has given up on climate goals set less than a decade earlier?

The 26th Conference of the Parties summit in Glasgow, far from taking the “big step forward” toward climate progress expressed by International Energy Agency (IEA) head Fatih Birol, has actually taken a big step backward. Just six years after the Paris Agreements set a goal of keeping warming within 1.5C degrees by the end of the century, world leaders have abandoned that target, thereby giving up on avoiding the worst effects of the climate crisis.

At this point, it is well established among climate scientists that if humanity is to withstand those worst effects, warming must not surpass 1.5C degrees above pre-industrial levels. Yet the IEA reported last week that climate pledges made at COP26 would at most keep warming to 1.8C degrees above pre-industrial level. Celebrated as a victory for climate action, this new target moves the earth closer to catastrophic levels of warming. Furthermore, meeting this threshold is only possible if every single government completely follows through on its pledges — an unlikely prospect given their track record since Paris.

The best offer the world’s powers are making is to fail to meet what scientists say is necessary for survival, with no mechanism for enforcement of their insufficient pledges, which are entirely voluntary. Further, the pledges put these insufficient commitments years or even decades into the future. In the meantime, the fossil fuel industry will continue to exacerbate this crisis without obstacles.

COP26 is a cruel joke and a slap in the face to the communities most affected by the climate emergency. A 0.3C degree increase in the warming target may not mean much to the capitalist class or the world leaders who serve its interests — they have the means for longer-term survival — but it is a matter of life and death for hundreds of millions around the globe. As NASA has shown, allowing warming to increase by just a half-degree would mean an additional 450 million people subjected to regular heatwaves, and an additional 61 million people facing severe drought.

The environmental movement needs to understand that leaders of capital, even when they acknowledge climate science, are unwilling and indeed incapable of taking steps to halt the crisis — which is a direct byproduct of capitalism — because to do so threatens the profits and exploitation on which their system is based. At this point, there is little that can be done simply with “green” reforms to capitalism.

The 1.8 threshold is a tacit admission by capitalist leaders that their system is incapable of saving the vast majority of the world from the climate crisis. COP26 should make clear to all that the longer the capitalists control the world’s resources, the more lives will be lost among the working class, particularly in the countries subjected to imperialism and impoverishment, and disproportionately among Black, Brown, and Indigenous communities.

There have been massive protests in Glasgow. Demonstrators understand that COP26 is nothing but a public relations event for the world’s biggest polluters. They’ve taken the fight for the planet to the streets because there can be no trusting the decisions made in the halls of power. The protests are inspiring, as are the Indigenous-led movements that have been on the frontlines of environmental struggle despite brutal repression and retaliation.

Socialists support the people around the world who are putting their bodies on the line to defend the planet and the lives of people facing death from climate change around the world. But it is not enough to fight just for mere survival or for reforms aimed at slowing down the rate at which capital wastes the world’s resources to make profit for a few private interests. Humanity needs to fight for a socialist system in which resources are owned and controlled by the people for their needs. That’s the only real solution to climate change.