Corporatism is a Feature of Capitalism, not a Bug

Capitalism inevitably leads to billionaires and large corporations dominating all of society, because it is a system designed to funnel the wealth of the many to the few. 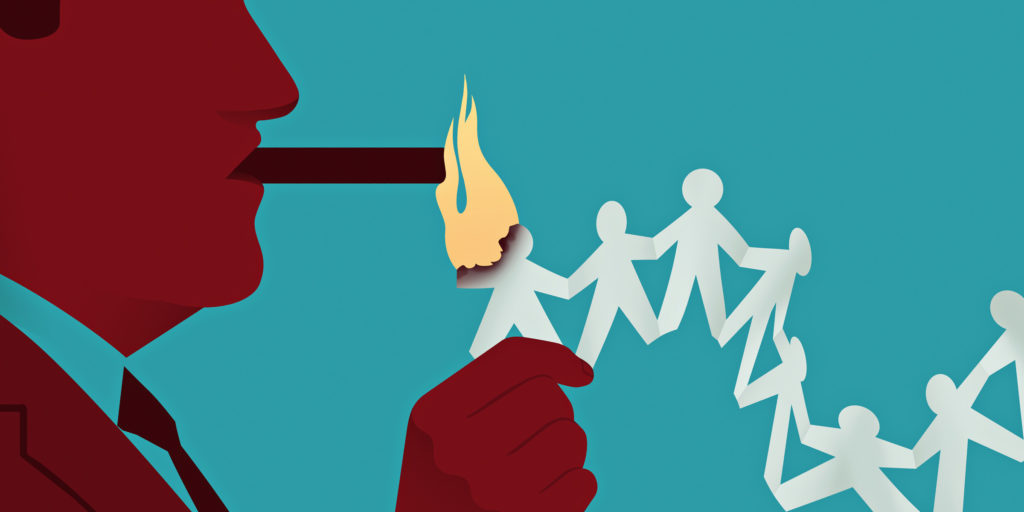 In a time when the ridiculous excesses and destructiveness of late capitalism are impossible to deny, the argument is often put forth that the problem is not capitalism itself but “corporatism.” The word corporatism is often used to refer to the way large corporations dominate not only the marketplace, but also governments, politics, and our personal lives. The argument asserts that if big businesses can be properly constrained and regulated, then capitalism can work as intended. However, this phenomenon of unbridled corporate dominance is not an accident of capitalism, but an inevitable result of it.

Capitalism is not the Same Thing as Trade

Sometimes capitalism as a system is confused with the simple exchange of goods and money. While capitalism does use that exchange, they are not equivalent. Capitalism is the use of wealth (whether in the form of items or money) not to acquire what a person needs to live, but specifically to accumulate more wealth. Imposing private property and using the state (cops, courts, jails, etc.) to enforce it, the rich claim ownership of nearly everything and then demand that everyone else works for them in order to survive. No one is allowed to work for themselves since ownership of all land and resources is already claimed. All capitalists seek to expand, or “grow,” their wealth by using it to accumulate even more. They may hire additional workers and keep most of the wealth those workers produce for themselves. They may buy up other businesses completely. They may exploit labor and natural resources in poorer nations. Those who have done this most successfully have become the large corporations of today.

As corporations continued to expand their power and wealth, they started to become monopolies. For example, during the second world war in the United States, there were at least a dozen different companies producing aircraft for military and commercial use. Now production is controlled by just two — Lockheed Martin and Boeing. Another example might be how many areas of the U.S. have only one option for Internet service. A large number of grocery brands are actually owned by one of only a few large corporations, such as Nestlé, PepsiCo, and General Mills. These examples directly counter the common argument that capitalism promotes a marketplace full of diverse vendors and products at low prices.

Historically, capitalism has always been about the boss accumulating as much wealth as possible. Landlords and factory bosses extract as much profit from workers and the land as possible. Over time those with the greatest wealth and power were able to buy out smaller competitors  or drive them out of business. Capitalists also regularly used, and continue to use, the force of the state to displace small farmers and native people in their own countries and in occupied lands. This is what Lenin called the “combination of production,” which led to the rise of monopoly capitalism. Production here isn’t only factories, but also things like software services and logistical infrastructure. “Combination of production” is none other than the rise of monopoly capitalism. This effect can be seen in the present day as well not only in the direct buying out of small businesses by larger ones, but also in the replacement of independent “mom and pop” establishments by chain stores. It is generally in tough times that “combination” happens most, as companies rarely go out of business when they are doing very well. In many areas local, independent businesses are replaced by corporate chains as landlords raise rents. The popular video call service Skype posted a loss of $7 million and a debt of $686 million not long before it was bought by Microsoft. After several years of failing to produce enough profit growth to satisfy investors, Whole Foods was bought by Amazon. To save on its massive shipping costs and help ensure fast deliveries, Amazon also runs and continues to expand its own fleet of cargo aircraft. The ongoing COVID-19 pandemic has given e-commerce giants their biggest ever opportunity to expand while over 100,000 small businesses have closed forever.

Some may argue that more and better regulation to keep big business under control is the answer, even though this has never successfully worked in the past. Far from opposing big businesses, the famous trust-buster Teddy Roosevelt was actually a supporter of them. In his own words, he was “in no sense hostile to corporations. This is an age of combination, and any effort to prevent combination will not only be useless, but in the end, vicious…” Instead of keeping big business under control, capitalist governments support and nourish them. The response of the U.S. government — a government of and for the rich — to crisis has been primarily to bolster large corporations while mostly or completely ignoring the increased plight of the working class.

In 2008, the big banks were given massive bailouts with virtually no strings attached. Those banks proceeded to kick many lower middle class people from their homes for being unable to pay the mortgage after losing their jobs. The response to the COVID-19 pandemic has been very similar. Most of the government aid has gone to large corporations, without sufficient provisions for worker protections, renter protections, and student debt cancellation. All it provided was a  one-time $1200 payment that some people (such as undocumented and gig workers) didn’t event get. For workers in cities like New York or San Francisco, that $1200 may not even cover one month’s rent. Those who are still working have been made to sit and watch as their tax dollars go to subsidize companies like Boeing instead of their local hospital that’s struggling to save lives without enough beds, protective equipment, or staff. Similar pro-business, anti-worker policies have been enacted in other countries. In the UK, billions in relief money went to airlines, car companies, and oil companies. Sweden’s refusal to shutdown schools and nonessential businesses gave that country the highest per capita death rate in Europe at one point. It even exceeded the death rate in the U.S. despite Sweden’s better healthcare availability, and far surpassed the death rate in other Scandinavian countries that did shutdown. The pattern here goes beyond the failures of specific leaders — the entire capitalist economy is designed to exploit workers in order to increase billionaire profits.

Often the people appointed to government regulatory agencies end up being the very industry bosses who most need regulating, creating an obvious conflict of interest. The “revolving door” between the FDA and the pharmaceutical companies is well-known, and can lead to regulators letting companies cut corners to boost profits — at the expense of patient safety — because they know a big corporate salary awaits them when they leave the FDA. This kind of covert corruption is a problem for every industry in a capitalist, bureaucratic society, not just pharmaceuticals.

The outsized influence of corporations on society is not limited to the marketplace. When the people of Laredo, Texas wanted to ban disposable plastic shopping bags to protect their local environment, the Laredo Merchants Association brought in their oil industry contacts to get the state supreme court to overrule it. In 2012, the people of Longmont, Colorado voted to ban fracking in their city. Industry groups representing oil and gas companies sued, and judges chose to place corporate mineral rights above the health of people and the environment.

The inevitable result of such a system is what we see now — all of society beholden to a tiny group of billionaires. While measures from the New Deal to minimum wage laws to universal healthcare — all of which were the product of intense class struggle —  have indeed made material improvements in workers’ lives, they have not changed the fundamental power structure. Society continues to be controlled by the rich, not democratically by and for working people.

Socialism, Business, and the Economy

The only way to successfully reign in big business and its disastrous effects upon society is to dismantle capitalism itself and put all production, and the rest of the economy and public services, under the democratic control of the working class majority, instead of under the control of the super-rich one percent. Imagine if workers, who already know how to produce what society needs, could decide for themselves how best to organize and run their workplaces, instead of being dictated to from on high. Imagine if apartment buildings were collectively owned and managed by the people who live in them. Imagine how much more the human species could accomplish if every human were guaranteed housing, clean and healthy food, water and air, healthcare, transit, clothing, and education. The only way to solve the deep issues that capitalism creates is to get rid of this violent, unequal system once and for all — and replace it with a system that puts the economy and society under the democratic control of those who are already making them run.