Mayor Eric Adams’s directive to involuntarily detain the unhoused is about hiding the uncomfortable effects of capitalism. 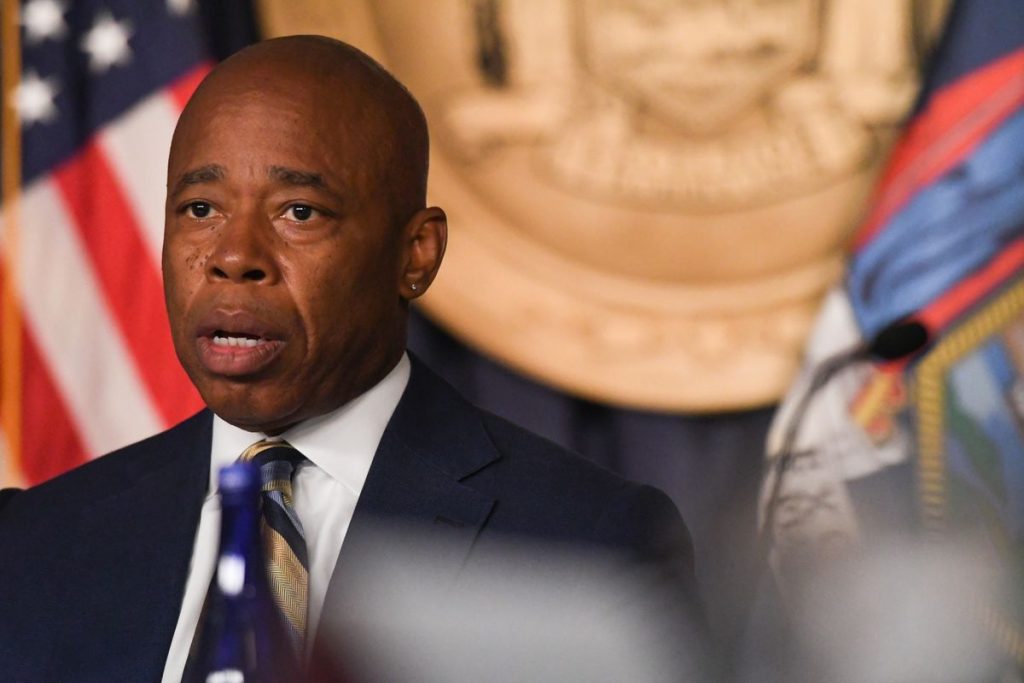 Last week, New York Mayor Eric Adams announced his new directive allowing cops to forcibly remove people from public areas and involuntarily detain them for transport to hospitals. The mayor’s guidance expands previous definitions which allowed cops and qualified professionals to involuntarily detain someone if the individual is deemed to be a threat. Now, the new recommendations allow cops to detain people if they deem they are “unable to meet their basic needs.” Adams claims this decision is best for public safety and individual well-being, but his decision was never about public safety — it’s about hiding the effects of austerity, cuts in social services, and the vast inequalities created by capitalism in one of the wealthiest cities in the world.

Adams made his recent announcement by saying he did not want to “punt” the issue. Giving killer cops more power will in no way, shape, or form, help anyone, especially the mentally ill, who often are at most risk of being victims of police violence. Instead, it gives more power to the racist, murderous institution of policing to terrorize the public more freely under the guise of concern with mental well-being.

To be clear, there are individuals who may need medical care or hospitalization in times of crisis, but many do not. Where I work, at a harm reduction facility in NYC, staff deescalate people every day without the need for medical intervention or hospitalization. The police should not be the ones making that kind of decision. Giving cops the ability to determine who is and is not able to meet their basic needs will only lead to further police interactions with vulnerable populations and more violence towards unhoused and mentally ill people.

Police Benevolent Association (PBA) president President Patrick Lynch responded to the recent directive by saying “We need our leaders to back us up when we carry out these duties.” But cops don’t need more “backup” under capitalism — they’re essential to capitalism. Giving them more power will never help the public or increase safety.

Mayor Adams’s recommendations come as hospitals and mental health facilities in the City are strained. Hospitals were already poorly staffed pre-pandemic, and this has worsened as the pandemic has progressed. This has led to staff ranging from physicians and nurses to social workers and case managers struggling even more to provide  adequate care. Now, with increasing cases of Covid-19, flu, RSV, and various other respiratory illnesses, this is becoming even more difficult. If Adams was really worried about mental health, he would fully fund mental health services and greatly expand hospital services.

There are alternatives to hospitalization such as respite centers or safehouses, often run by individuals with lived experience, that are also options for individuals in crisis, but both the number of crisis centers and mobile crisis units have been on the decline. Instead of investing to create more of these centers, Mayor Adams has tried to eliminate roughly half of the vacant public service positions in the city — with the exception of police positions of course.

It’s no coincidence that a cop mayor can find no better solution than giving cops more power. This is the same mayor who can build new jails throughout the city — including what would be the tallest jail in the world — but can’t find anything better to help individuals who may or may not be in a mental health crisis than having cops harass them.

Adams’s decision was never about caring about people, but instead about obscuring the uncomfortable result of capitalism. Today, crime, mental illness, and homelessness are conflated and interrelated. Capitalism helps create and exacerbate mental illness and disability, and then exploits those suffering to make a profit. In many ways, the results of capitalism’s barbarism are then used to discipline the working class. The ruling class essentially says, “Keep your head down and stay in line or you will end up like these people living on the street.”

Healthcare illustrates the way that suffering can be exploited under this system. Adams’s recent directive is an effort to collaborate between the institution of policing and healthcare. Left Voice member and social worker Julia Wallace recently observed a similar dynamic set to play out in Los Angeles where she works with individuals suffering from severe psychological distress and homelessness:

The mental health care system in LA does not have the trained staff and infrastructure to provide the care it would need to make involuntary holds at all effective—not to mention the negative experiences patients express regarding such holds. Under such a model in LA, hospitals which are mostly for profit, would be warehousing people. It would likely not be rehabilitative at all but would be very profitable. At the same time cops can look more humane and rents can stay high benefitting landlords because homeless people are off the street.

Whether NYC or LA, benefits come from investing in public health measures. In terms of who should decide how these measures should be organized, Wallace notes:

People who do the work, patients, and community members should be deciding this issue.  Furthermore, unionized healthcare workers should have a role in deciding how to best address these issues, but are short staffed and underpaid as it is because of government officials systematically defunding healthcare and public health institutions.

We need to fight for increased public health measures under worker and community control. At the same time, we should fight back against any actions by government leaders like Eric Adams which only further empower the armed wing of the state, and fight against a system harming the physical and mental health of us all.