The DSA convention is this weekend. Here are 5 resolutions that socialists should support. 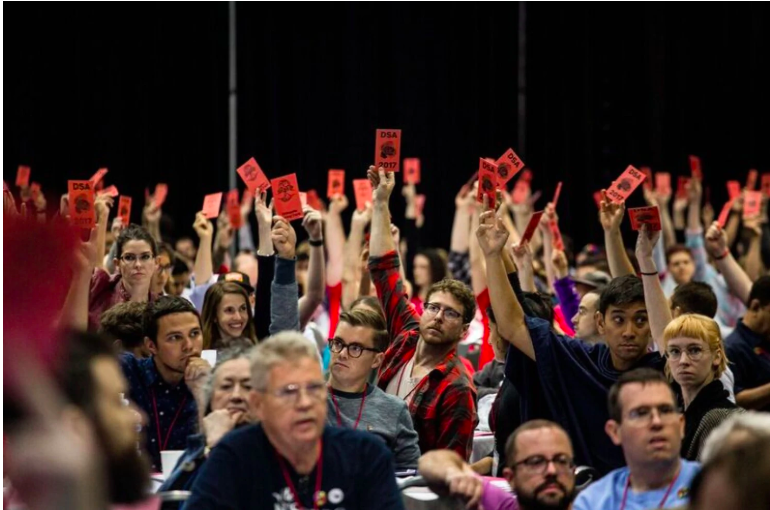 This upcoming weekend (August 2nd-4th), the Democratic Socialists of America (DSA) will hold their biennial national convention in Atlanta. At this convention, a new National Political Committee will be elected, and resolutions will be debated and voted on. 85 resolutions were proposed, as well as 33 amendments to the DSA’s constitution. Many of these resolutions focus on internal organizational questions: creating a national growth and development committee, creating a conflict resolution training committee, hiring new staff, etc.

At a time when Trump is attacking reproductive rights and is in the midst of an open war against immigrants, these resolutions are particularly relevant. The items are presented in no particular order and this isn’t a complete list- there are other resolutions I think are quite good.

pledge to vote against any and all federal budgets that fund military bodies and military operations abroad, despite any and all other provisions earmarked within those bills.

This resolution–if passed–will represent a commitment to anti-imperialism from an organization that has traditionally been weak on that issue. DSA has a troubling history of collaborating with the Democratic Party and endorsing candidates for public office who, once elected, offer little to no opposition to the imperialist actions of the state. The Democratic Party–on whose ballot line essentially all DSA candidates currently run–is a profoundly imperialist party of bombs, coups and deportations. Ocasio-Cortez, for example, just voted for Trump’s federal budget.

You may be interested in DSA Convention 2019: Sanderism and the Tyranny of the Procedural

As socialists living inside the greatest imperialist power on the planet, we must both be internationalists and anti-imperialists without compromise or quarter. We cannot support, endorse, or campaign for anyone who votes to fund the biggest killing machine in the world.

This resolution is a multi-layered proposal for

DSA [to] declar[e] itself in solidarity with sex workers and those in the sex trade as part of the broader struggle of the marginalized working class, both in the United States and abroad, and issu[e] a public statement declaring itself in favor of the full decriminalization of sex work…

Adopting this resolution would show a commitment to sex workers–who face persecution and abuse and are often women of color and queer people. This becomes especially relevant with the recent passage of SESTA/FOSTA, a bill that conflates sex work and human trafficking and creates unsafe conditions for sex workers. The authors of the resolution highlight that the penalization of sex work means higher levels of violence at the hands of police and clients.

This resolution does run into conflicts with the current political priority or the organization: Sanders 2020. After all, Sanders voted for SESTA/FOSTA–a decision that the authors discuss explicitly in the resolution, saying that DSA should

ope[n] dialogues with candidates it has already endorsed, specifically and especially Bernie Sanders, who voted for SESTA-FOSTA, to determine their current stances on sex work and if necessary encourage them to align with DSA in favor of decriminalization.

The resolution doesn’t go far enough, as it calls for Sanders and other endorsed politicians to be “encouraged” to change–rather than calling for DSA to revoke the endorsement. I’m not sure encouragement will mean much to the Democratic Party candidate who is currently polling second. Additionally, the DSA at this time has very few means of holding endorsed candidates accountable. Even so, opening up conversation represents a step in the right direction.

On the topic of endorsing future candidates, the authors of this resolution propose to have

This resolution offers the opportunity for a more open and political discussion about what type of candidates should be endorsed.

As socialists in the U.S., it is our obligation to actively resist the U.S. empire wherever we can. As such, opposing America’s colonial and imperialist practices and policies should be a key part of any socialist program. This proposal advocates for

DSA commit[ing] to the full decolonization of all the occupied lands of the so-called USA: self determination and full sovereignty for Hawaiʻi; Puerto Rico; Amerika Sāmoa; Guåhån; Northern Mariana Islands; Virgin Islands; and to all Indigenous nations whose ancestral lands are within the USA’s current borders; and independence to all other overseas territories and dependencies controlled, occupied, or otherwise exploited by the USA.

The recent uprising in Puerto Rico demonstrates how much we need clear and uncompromising politics around the U.S. colonies. This means the self determination of people in places like Puerto Rico and Hawaiʻi. This politics needs to go beyond resolutions on our website. We should lead the way for active solidarity and mobilizations. It will be much more difficult for anti-colonial projects to be successful if  people in the United States don’t mobilize as well. That is why it’s really important that the DSA pass this resolution and more importantly, put it into action.

This resolution proposes that

DSA supports the uninhibited transnational free movement of people, the demilitarization of the US-Mexico border, the abolition of ICE and CPB without replacement, decriminalization of immigration, full amnesty for all asylum seekers and a pathway to citizenship for all non-citizen residents.

Despite what Angela Nagle says, there is no left case for closed borders. Borders are used to divide the global working class and create a sector of hyper-low wage workers in the U.S. While the capitalists are able to move goods freely and often without taxes, people are barred and kept in cages if they dare attempt to cross.

DSA [to endorse] the call for a mass strike for reproductive rights and [to begin] organizing in anticipation of a challenge to Roe vs. Wade at the Supreme Court.

Just as in immigration, the right is united in their focus on abortion and has been winning major victories in rolling back abortion access across the country. I don’t think anyone has any doubt that we need to mobilize against the attacks on reproductive rights. The question is how? This proposal advocates for engaging the masses in class struggle on the streets through a strike rather than at the ballot box. This is a pretty major break with much of DSA’s past history that focuses on lobbying.  To call for public action in this way would shift the DSA away from an electoral strategy that relies on the Democrats and towards a strategy that is based on class struggle.

For more about this resolution read: DSA Members Call for Mass Strike for Reproductive Justice

What Does All This Mean?

These resolutions, which got at least 50 co-signatories, demonstrate left politics among a sector of people who are new to socialism. These are folks who understand that our socialism must be feminist and on the side of the most oppressed sectors of the working class. The resolutions indicate that some folks believe that anti-imperialism has to be at the center of our socialist project.

However, these resolutions are also at odds with the DSA’s political work: the ideals contradict working for Bernie 2020, as well as supporting other Democratic Party politicians. Candidates like Sanders and Ocasio-Cortez do not vote anti-imperialist in Congress.  They vote for border walls and for the defense budget. As more left-wing members propose progressive resolutions, the organization will have to grapple with its collaboration with the Democratic Party, an imperialist party of the capitalist class.

So, if the resolutions are passed, what will the DSA do? Resolutions are not magic bullets that will convince the DSA to stop running on the Democratic Party ballot line, but they do illuminate the contradictions of the current prevailing theory and strategy. Transforming these resolutions into reality will depend on the actions and militancy of hundreds of DSA members. It will be difficult to fight for them during the election-mania that has already begun.

The left-wing of the DSA should use the convention to fight for the perspective that we must build a socialist project that puts anti-imperialism, feminism and revolutionary socialism at the center.

Ezra is a member of the NYC DSA, Bronx/Upper Manhatten branch.