For the Planet, There Is No “Lesser Evil”

As fires rage on the West Coast, Donald Trump and the Republican Party continue to deny the basic science of climate change. Many people hope that voting for Joe Biden will save the planet. But the Democrats’ record on the environment shows they offer nothing to stave off a climate catastrophe. 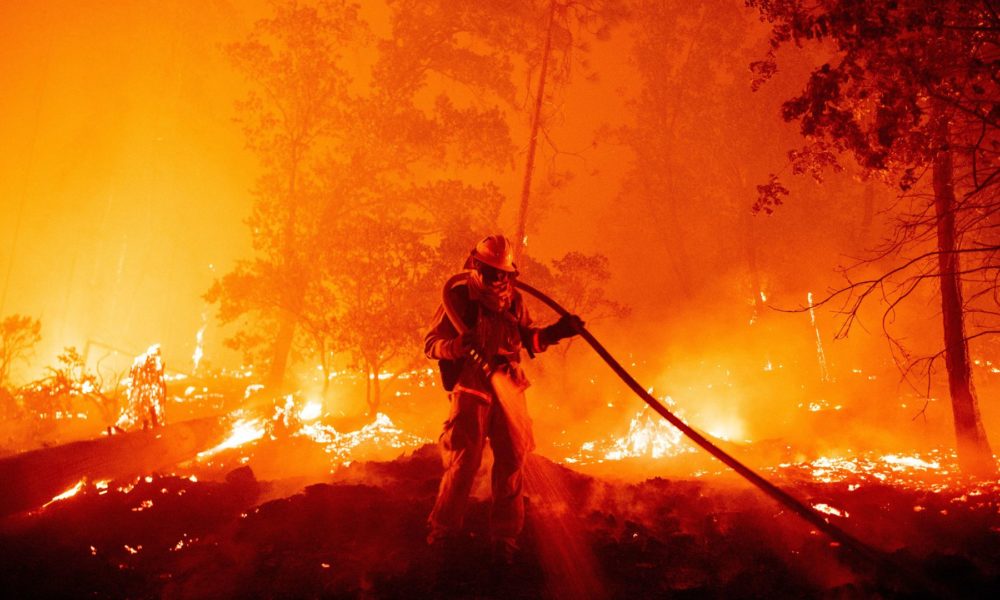 By now, most people in the United States recognize that the climate crisis poses the greatest threat to humanity and nature. Faced with a president who continually dismisses the dangers of global warming and has taken numerous measures to expand fossil fuel production, many progressives and even some on the Left have declared the need to vote for Biden as the “lesser evil” in November. Noam Chomsky went so far as to label the Republicans “the most dangerous organization in human history” because of Trump’s aggressive pro-fossil fuel agenda. Chomsky pleads for those on the Left to cast their vote for Biden.

But what will change if Joe Biden is in the White House?

Each season brings new and more severe manifestations of our rapidly warming planet. California is experiencing its largest wildfire season ever. More than 4.5 million acres have burned — that’s more than twice the previous record. Half of the 10 largest fires in California’s history have happened this year. While the West Coast burns, the East Coast is being pummeled by unprecedented storms.

This year began with equally horrific fires in Australia. Millions of Californians, like tens of millions of others around the world, are feeling the impact of climate change each day.

We know the author of this destruction. It is the responsibility of an anarchic and reckless economic system: capitalism. And the world’s largest capitalist power, the United States, is chiefly to blame. Democrats would have you believe that it was solely the Trump and Bush administrations that pushed an anti-climate agenda. In fact, the climate crisis we are experiencing is the result of decades of bipartisan policy directed at extracting and burning the greatest amount of fossil fuels.

We do not deny Trump’s criminal actions toward climate and nature. He withdrew from the Paris Climate Agreement, and has weakened regulations on oil and gas drilling and on emissions of CO2 and other greenhouse gases. (In fact, as the crisis has led to a massive drop in oil prices, emissions of methane gas, which is especially damaging to the climate, have exploded.) Trump lifted various drilling bans in place in Alaska and on other protected public lands.

These actions, apologists for the Democratic Party say, are reason enough to vote Biden. But a look at the record of the Democrats, particularly the Obama Administration, makes clear what a Biden administration is likely to do. While Biden’s agenda is not as brazen as Trump’s, a Biden presidency would keep us on the current path toward catastrophic levels of warming.

Crude oil production increased each year that Obama was president, a fact about which he seemed extremely proud. In 2012, Obama bragged that his administration had already helped build enough oil and gas pipelines to “encircle the Earth and then some.” By the end of his eight years in office, oil production had increased by more than 80 percent. Obama also oversaw a continuing boom in natural gas extraction, based largely on an expansion of fracking.

Obama touted the Paris Agreement as an international treaty that would limit carbon emission. But it was never more than tepid and largely symbolic. At the COP21 in Paris, it was the United States under Obama that blocked any language suggesting binding targets for reductions. Instead, each government was allowed to set its own “national” goals with no consequences for exceeding targets. And even if all countries do comply with their voluntary goals, which most never even seriously attempted, it would not keep global warming under 2°C — a point at which climate change becomes irreversible. Taken together, the so-called Intended Nationally Determined Contributions would lead to warming as high as 3°C.

Obama was not the only Democratic president to neglect the climate change emergency. Under Clinton, greenhouse gas emissions rose by an estimated 700 million metric tonnes — far more than during the terms of either his Republican predecessor or successor. During Bush II’s two terms, in comparison, emissions went up less than half that amount — 235 million tonnes.

Have things changed since then? Unfortunately not. Biden still fails to call for the kind of rapid economic transformation necessary to prevent the worst effects of climate change. One of the most notable things in the Democratic Party platform released this summer was the removal of a promise to end fossil fuel subsidies — although Biden had to recommit the following day when confronted with outrage from voters. While he has refused to endorse the Green New Deal by name, he touts a $2 trillion climate plan that supporters have called “transformative.”But crucially, this plan is based on continued private ownership of industry and the so-called “free market,” relying on mechanisms such as carbon trading and corporate subsidies. Biden is offering a neoliberal version of the Green New Deal, which itself is not nearly far-reaching enough to confront the severity of the crisis we face.

The crises confronting humanity are unprecedented. People in the Pacific Northwest need N95 masks to go outside, not only to protect themselves against a deadly virus but also to block the smoke and ash in the air from the raging wildfires. These dystopian scenes promise to become more frequent each year. Climate change is a reality that will soon come to govern our daily lives in the form of wildfires, hurricanes, rising seas, droughts, and floods. Meanwhile, the Democrats offer us a candidate who promises billionaires that “nothing will fundamentally change” if he is elected.

For once, we can assume Biden is telling the truth. Humanity’s only chance for survival is radical change to our economic system. We need a planned economy under democratic control that transitions immediately away from fossil fuels in order to halt the destruction. The planet can’t afford the “lesser evil.”