There is no country in the world beyond Russia and Ukraine where the recent Russian invasion has had more immediate repercussions than Germany. However, its recent historic shift in military spending is currently colliding with the imperatives of preserving social peace. This fragile balance will be unsustainable in the new volatile era inaugurated by the war in Ukraine. 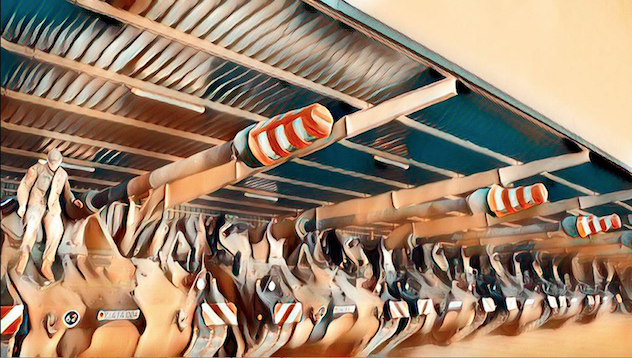 On February 27, German Chancellor Olaf Scholz delivered a forceful speech in which he announced a €100 billion defense spending package as part of a special fund to better equip the Bundeswehr [German Armed Forces] — nearly double the budget for all of 2021. More significantly, he announced that Germany would now spend “well above” the target set by NATO for its members, which is 2 percent of its GDP, and will continue to do so every year. In other words, its military budget will be well above that of the United Kingdom and France in absolute terms. At the same time, discussions are already underway on whether to reinstate mandatory military service and accept France’s offer to share nuclear weapons. Multiple public opinion polls in Germany show that there is strong support for the government’s decision to spend €100 billion to arm the Bundeswehr. 65 to 78 percent of the population supports the military spending program.

This unprecedented move by Berlin, which is using the crisis to justify its own rearmament, is a major geopolitical event. The Ukraine crisis marks Germany’s return to the center of European security as a superpower. Germany’s militarization would simply not be possible without tacit US encouragement in the context of its containment strategy against Russia. But in addition to the fact that this major geopolitical line has been crossed, it is important to note that the decision is also based on the deep frustration of Germany’s military, whose positions will now carry more weight. As historian Katja Hoyer reported in The Spectator after Putin’s invasion:

The Chief of the German Army is angry. Alfons Mais’s words were colored by evident frustration when he said that the Bundeswehr had been ‘caught with its pants down’ in the current crisis in Ukraine: ‘The options we can offer politicians to support the alliance are extremely limited.’ Such outspoken political criticism is rare from high-ranking German military figures, which gave Mais’s rant even more resonance. He was particularly frustrated that he and others had raised concerns for years. ‘But our arguments to draw conclusions from the annexation of Crimea and put them into practice failed to cut through,’ he said. Mais admitted: ‘That does not feel great! I am pissed off’ [1].

The West’s decision to launch a massive round of sanctions, including the so-called “nuclear option,” Russia’s exclusion from the Swift system, has been one of the key measures aimed at forcing Putin to back down. But once the sanctions list had been discussed between European Union (EU) member states, only seven banks, representing a quarter of the Russian banking sector, had been sanctioned. The seven banks affected by the ban on Russia from the Swift network are VTB, Bank Otkritie, Novikombank, Promsvyazbank, Rossiya Bank, Sovcombank and VEB. Originally, the EU had promised to ban 70 percent of the Russian banking system. Notably, the two Russian banking giants, Sberbank and Gazprombank are not on the sanctions list. One of the reasons for Sberbank’s exclusion from the list was the savings deposits in the bank’s subsidiaries in the EU, which would have triggered massive deposit insurance claims.

Even more significantly, Europe continues to rely on Russian oil and gas. Robert Habeck, the German minister of economy, has categorically ruled out a ban on energy imports, saying it would undermine social peace in Germany. It is important to note that Habeck is the German politician who opposed the Nord Stream 2 pipeline long before it was fashionable to do so.

Beyond the economic warfare rhetoric, EU member states are unwilling to impose transactional sanctions on Russia in areas considered vital to the EU economy, especially the import of Russian gas, oil, and coal. The reality is that a ban on Russian gas imports would deal a brutal blow to Germany’s entire economic model because Germany’s energy needs and the structure of its export industry are closely intertwined.

As a result, despite the impact of the war in Ukraine, a large-scale energy crisis remains an unlikely scenario (despite the price increases that are already occurring). Drastic shifts cannot be ruled out in theory. In the 1970s, for example, the aggressive policy implemented by the main Arab oil-producing countries triggered a powerful strategy to diversify the supplies of large consumer countries, upsetting the market’s balance in less than ten years. As a result, OPEC (Organization of Petroleum Exporting and Producing Countries) went from managing to only regulating the market. However, Europeans currently lack a real alternative to their relationship with Russia because there are no viable solutions in the short term. And for the same reasons, as soon as tensions ease, the Nord Stream 2 certification process is also likely to resume its course.

A Fragile Balance in a New Volatile Era

Scholz’s decision was somewhat of a palace coup for his coalition allies, who only found out about it when he gave his speech in the Bundestag to thundering applause. According to the German press, the chancellor was worried about the potential opposition of the Greens and thus decided not to notify them in advance. Only Finance Minister Christian Lindner (of the center-right Liberal Democratic Party) was aware of the decision to embark on this foreign policy U-turn.

But after the initial shock, the first cracks in the nation’s new confidence have already begun to appear. Germany’s violent militaristic turn is, in fact, at odds with the pacifist sentiment prevailing among a large part of its population since the Nazi catastrophe, which gave rise to the largest pacifist movement in Europe in the 1980s when US President Ronald Reagan attempted to install NATO missiles in German territory in the so-called Second Cold War. This very movement resulted in the emergence of the Greens as a party. Despite their current manipulation and the confusion created by the rejection of the Russian intervention — as indicated by the support for the military rearmament program shown in recent surveys — these traditions are unlikely to vanish overnight. As Scholz attempts to create a new Germany with more influence on the international stage, his leadership will be put to the test.

The government has thus far resisted all pressures to reverse its course and is even considering replacing Germany’s aging Tornado jets with U.S. F-35 jets. This would contribute significantly to shared deterrence in Europe, since F-35s can be used to deliver U.S. nuclear bombs. However, to ensure there is no turning back, Scholz has called for protecting the increased defense spending by inserting it in the German constitution, which would require a two-thirds majority. The three government parties and the opposition leader would have to discipline all critical or dissenting wings of their parties. This would also require the agreement of the conservative opposition (CDU/CSU) and the Länder [the states into which the German Federal Republic is divided]. The CDU/CSU is not opposed in principle, but wants to know more about the details of the funding.

In any case, it is clear that the U.S. will make Germany and the rest of the European imperialist countries foot the bill for this new imperialist burden. The resulting sacrifices that will need to be made by the masses will likely lead to a loss of support, despite the current endorsement of the militaristic turn by the majority of the population in response to the Russian invasion.

The international scenario is just as complicated. Germany is now re-embarking on a path towards militarization for the third time in the past century. As geopolitical analyst George Friedman rightly noted: “2022 isn’t 1914 or 1939, but an armed Germany is significant.” Once again, the ambitions of German imperialism are rising to the surface. And as former Foreign Minister and current President Frank-Walter Steinmeier said in a speech in the Bundestag — and at the Munich Security Conference — in early 2014, Germany is “too big and too important” to limit itself “to merely commenting from the sidelines of world politics.”

The pivot towards Europe and Asia to contain both Russia and China – embodied by NATO and the Quad Plus, respectively – are now inevitable for Biden. But these geostrategic demands greatly exceed the resources of a divided U.S. hegemon in decline. As a result, Germany has now seized this opportunity to increase its military spending and contribution to NATO, thus fulfilling a years-long request by the Pentagon. This unexpected decision and the use of the Ukrainian crisis to justify its own rearmament is a major risk involved in the strategy deployed by Washington, which is determined to play a secondary role in Ukraine, while ensuring that this does not mark the beginning of a shift in Germany’s foreign policy towards greater independence. The EU, for its part, has presented a united front. But behind the facade, the formidable set of sanctions is still marked by the conflicting interests of European nations. This new step taken by Germany is certainly not good news for France, whose military supremacy is key to ensuring its influence on the European stage, not to mention for the U.K. or even Italy. None of the allies on either side of the Atlantic favor a scenario in which they could one day find the Germans, aware of their influence, deploying fresh divisions on the wrong side.

This series of internal and external contradictions are a clear indication that Germany’s much-prized stability has come to an end, and that it is now entering a volatile era in an equally volatile world, a “time of crisis, wars and revolutions,” when pockets of stability like the Germany of former Chancellor Merkel will be increasingly rare.

We need to prepare!

Originally published in Spanish on March 6, 2022 in Ideas de Izquierda.