In Debate: A Socialist’s Case for Howie Hawkins 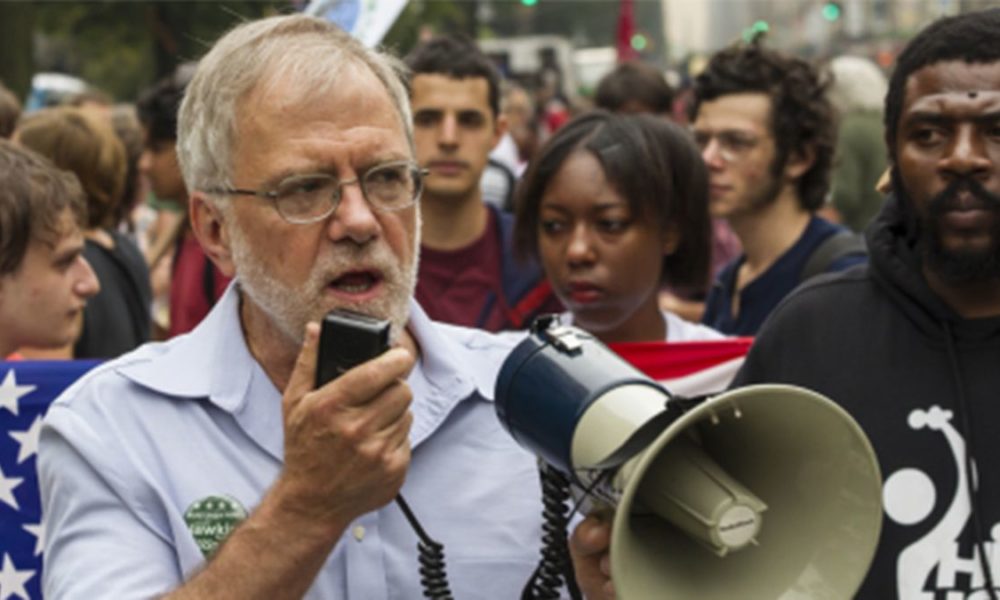 The 2020 presidential elections are quickly approaching and Leftists across the U.S. are once again debating whether or not to throw their support behind the Green Party. Left Voice has taken a strong position against supporting the Green Party and its candidates. We recently published a socialist case against Howie Hawkins and the Green Party, and just today we published an article showing how Green Parties around the world have never been vehicles for socialists. But not everyone on the Left agrees; and several organizations and individuals have been advocating a tactical vote for the Green Party, and more specifically its presidential candidate, Howie Hawkins. In the spirit of this debate, we are publishing the following article by John Palmucci, which we received in response to Ezra Brain’s “A Socialist Case Against Howie Hawkins and the Green Party.”

In Ezra Brain’s recent article for Left Voice titled, “A Socialist Case Against Howie Hawkins and the Green Party,” Brain proffers well-founded criticism of the Green Party from a socialist perspective. The Greens are not working class in composure or character. Socialists should not look to them to lead us out of capitalist desolation since they are, in fact, a dead-end for us. The Green Party’s platform leaves a lot to be desired. Too much for any socialist. In this sense, Brain succeeds in making a compelling case against the Greens. What is less convincing is the case against Howie Hawkins and, presumably, his running mate Angela Walker, who Brain fails to mention at all. Rather than engaging with Howie and Angela as candidates, it would appear that a choice was made to conflate them with the absolute worst aspects of the Green Party. As socialists, we shouldn’t be doing that.

Hawkins and Walker are workers, first and foremost. Howie spent many years loading trucks at UPS, and Angela served in union leadership of her Milwaukee ATU local and currently works as a dump truck driver in South Carolina. Hawkins is best known for his perennial leftist electoral campaigns in New York. Walker is no stranger to running as a socialist, having campaigned against (Democrat and Trump supporter) Sheriff David Clarke in Milwaukee and having run with the late Mimi Soltysik on the Socialist Party’s 2016 presidential ticket. Howie routinely cites the Marxist Hal Draper as an influence while Angela self describes as a “Fred Hampton/Assata Shakur socialist.” They are about as far of a cry as possible from the likes of Ralph Nader and Jill Stein.

Hawkins’s call for “social ownership of key sectors” doesn’t quite have the same ring to it as “worker control of the means of production,” but it doesn’t have to if we accept that this and the rest of his platform are a set of minimum demands. A minimum program should not be rejected on the basis that it doesn’t achieve socialism because that’s not the point of it. The point is to develop support for socialism within the ranks of the working class. We can not rely on maximalist sloganeering alone if we are ever to increase our numbers. Hawkins does not view his platform as a panacea to the current capitalist order, and neither should we. But if socialists are ever to implement our maximum program (socialism, that is), we will have to consider how we’ll ever garner enough support for it. Hawkins presents one such set of minimal demands that we should consider, debate, and improve upon on our way to reconstituting a socialist party.

Brain seems to acknowledge this somewhat when they say, “Socialists must fight for every reform that will benefit workers and the oppressed. But we know that capitalists will reverse whatever reforms we win at the first opportunity. Real change cannot be won through elections — We win real concessions by protesting in the streets and challenging the capitalists’ control of the means of production. Electoral campaigns — especially those at the national level — can amplify those fights, but we must formulate every struggle for reforms as part of a larger strategy to build up the power of the working class and topple capitalism.” But because they are on the ballot as Greens, it’s not acceptable from the Hawkins/Walker campaign. What is conveniently ignored when focusing solely on their Green ballot status is their already existing support from organizations such as the Socialist Party (of which I’m a member), Socialist Alternative, Independent Socialist Group, and a handful of DSA chapters. Should this support count for nothing?

In his piece for the International Socialist Review, “The case for an independent Left party,” Hawkins makes a full-throated argument for the working class to organize itself into a mass party independent of the Democrats and Republicans. He takes great care to poke holes in the “party surrogate” strategy being pushed by Seth Ackerman, Dustin Guastella, Jared Abbot, and others. Even more importantly, he elucidates his goal when he says, “Both corporate parties respond more to the economic elites that invest in them than in the people who vote for them. This leaves a political vacuum that an independent working-class party could fill—from the bottom up. And we need to build a socialist left that is clear-eyed about the necessity of that task.” That is as good of a reason as any to support Hawkins. He can effectively skewer the pervasive DSA/Jacobinite ideology while also pushing us to build counter to it: a mass socialist party.

While Brain’s criticisms of the Green Party proper are not without their validity, they simply cannot and should not be projected wholesale onto Howie Hawkins. That being said, there is an obvious contradiction that exists between Hawkins, a socialist, and the multi-class Green Party. What we must do is account for why that contradiction exists.

Socialists will have to reckon with the fact that the Green Party’s existence is predicated upon our failure to reconstitute a socialist party. In the absence of a socialist party, the Greens have become the token party of the US Left. Our own inaction on this front has allowed them relative dominion over any kind of leftist electoral agitation. That is something that must change. We can’t just resign ourselves to polemicizing on its necessity; it is something that we must do. Perhaps a united socialist electoral front can be a part of that process. At the very least, it is an attempt to remind socialists of our goal.

In the face of calls from prominent leftists like Noam Chomsky, Angela Davis, and Cornel West, as well as, and all the more unfortunately, Dan La Botz, for us to vote for Biden, we must reject lesser evilism in all of its forms even when our own comrades are promoting it. Similarly, we should reject the notion that supporting Howie Hawkins is tantamount to its own kind of lesser evilism.

Regardless of how socialists vote this year, one thing is for sure: we aren’t getting socialism. But that doesn’t mean we shouldn’t vote for a socialist. If we can’t bring ourselves to voting for a candidate that wants a mass socialist party, can we seriously expect ourselves ever to build one?