On Sunday, 56% of Berliners voted in favor of expropriating housing companies that own more than 3,000 units in the city. But a militant campaign will be needed to implement the voters’ will. 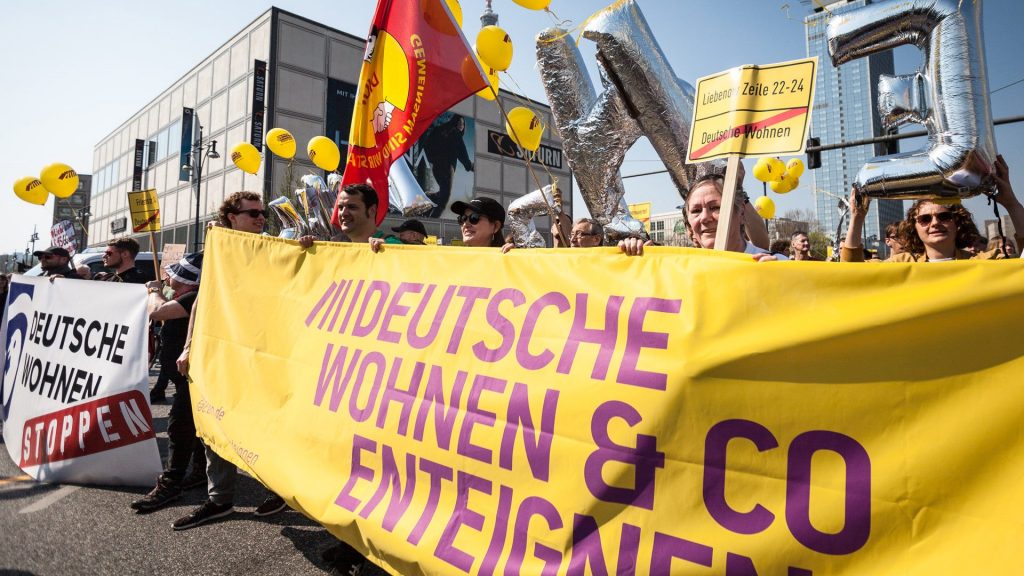 It was a helluva party! On Sunday evening, hundreds of activists gathered in an old Berlin film studio for an election party. They wrote purple vests with yellow logos, waved flares, and sang battle hymns.

This was a rare instance of euphoria during what was otherwise an extremely depressing election night. In the German and Berlin elections, none of the parties could simulate much enthusiasm — even the winners, the social democrats, got one of the worst results in their party’s history.

The campaign to expropriate big landlords, however, won in a landslide. 56.4 percent voted “Ja” and just 39 percent voted “Nein.” In my working-class neighborhood, over 80 percent of people were in favor. (Long live Red Neukölln!) The initiative Deutsche Wohnen und Co. enteignen demanded all housing companies with more than 3,000 units to be turned into public property. That amounts to about 240,000 apartments in total — but no one knows for sure, as Germany is a paradise for money launderers, and owners hide behind offshore shell companies. Even the government can’t say who between 25 and 50 percent of buildings belong to.

In the first half of this year, thousands of activists gathered over 350,000 signatures for the expropriation of big landlords in Berlin. This was more than one in ten of the city’s residents, making it the biggest ballot initiative in the city’s history. As a result, a vote had to be held on September 26, parallel to the German and Berlin elections. The campaign included both recent immigrants (there was even an English-speaking group) and lifelong Berliners.

Sunday’s referendum result is even more astounding when one considers that five of the six parties in the Berlin parliament had come out against expropriation. In the case of the right-wing parties like Angel Merkel’s CDU (the Christian Democratic Union), this was no surprise — they get large piles of money from real estate speculators. In the case of both the SPD (Social Democratic Party) and the Greens, a majority of party members voted in favor of expropriation, yet the parties’ official candidates had announced they were not going to respect the results.

The referendum is not legally binding. All it actually says is that “the Senate is called upon to introduce all measures necessary for the transfer of real estate and land into common ownership, for the purpose of socialization under Article 15 of the Common Law.”

Only the Left Party DIE LINKE campaigned in favor of expropriation. But that party suffers from serious credibility problems. They have been in government in Berlin for most of the last 20 years, and were responsible for privatizing almost 200,000 apartments in the 2000s, causing rents to double in the last decade.

The demand for expropriation, originally from the radical Left, was hugely popular — yet “The Left” party was not popular at all, losing 1.5 percent of votes in Berlin compared to the last election. At the national level, they lost almost half their voters and only by a hair did they manage to retain seats in parliament.

In other words, the vote is symbolic, and Berlin’s new government will need to implement it. A new Berlin government will likely be formed by SPD leader Franziska Giffey. She had once declared she would never carry out expropriations, but given the overwhelming result, she had to backpedal. In the gratingly passive voice of a bureaucrat, she declared on election night: “The drafting of such a bill must now take place.” Adding ominously: “This bill must then be reviewed for its constitutionality.” The SPD already tried to block an earlier phase of the referendum with over a year of “legal review.” Giffey will certainly use the same stalling tactics.

The claim that expropriation would go against Germany’s constitution is preposterous. Anyone can read Article 15 (available here in English), which allows nationalization “for the public good.” Giffey should know this — it was her party that inserted that article into the constitution.

In case you want to ask the experts, the research service of the German parliament, as well as the research service of the Berlin parliament, as well as the Berlin Senate Administration for City Planning, have all determined that socialization is completely constitutional. Things are expropriated all the time in Germany — people’s homes in Berlin-Neukölln were only recently torn down to build an Autobahn, for example. Entire villages are confiscated and destroyed to dig up lignite coal. Of course, these expropriations are for the benefit of capital, not the working class. But when people want expropriation to lower rents, that’s suddenly impossible. The only people screaming “unconstitutional” are the lobbyists of realty speculators.

Giffey further claims that real estate companies will need to be paid speculative prices — something like €38 billion (US$44.4 billion). But there is nothing about this in the constitution — quite the opposite: German law is in fact very clear that compensation does not need to be at market value.

A week before the vote, the SPD arranged to buy back 14,750 apartments from private companies. These are the same apartments they sold 15 years earlier. The new owners did as little maintenance as possible. Yet they are now getting €2,000 more per square meter than they originally paid. The SPD — known in Berlin as the “concrete mafia” — is all about throwing public money at their friends. This was their very expensive last-minute attempt to take the wind out of the sails of the campaign for expropriation, and it clearly failed. Berliners want all 240,000 apartments, and for as little money as possible.

I was surprised when an 80-year-old relative said he had voted for expropriation. “The market can do some things,” he explained, “but it should be kept out of others, like housing, schools, and health care.” It seems like the iron grip of neoliberalism is breaking! In reality, the private sector has never been good at providing affordable rentals. Most of Berlin’s housing stock was built over the last century with public subsidies of one form or another. Companies like Deutsche Wohnen build almost nothing — they buy up existing stock and jack up the prices.

This vote is huge for working people in Berlin, and will have repercussions across Germany, Europe, and the world. Capital is squeezing ever more money out of renters just to have a roof over our heads. The vote on Sunday was a result of a years-long movement by working people. That movement will need to continue: with demonstrations, but also with occupations of empty apartments and with rent strikes. At every opportunity, we need to fight the government’s maneuvers to prevent voters’ will from becoming reality.