On March 8, lots of workers went on strike in Germany. This is what International Women’s Day has always been about. 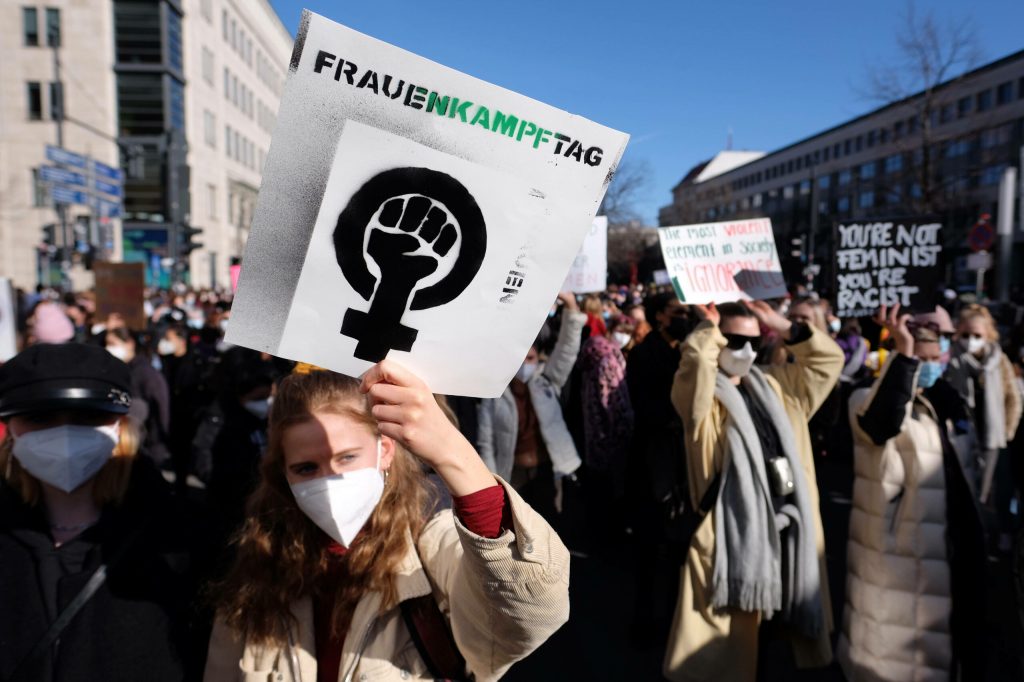 Yesterday was Internationaler Frauen*kampftag — the International Day of Women’s Struggle. (The name in German has always been cooler than in English.) The day was created by the socialist Clara Zetkin, and first celebrated in 1911. That year, there were 42 public meetings in Berlin alone.

Now, March 8 is a holiday in Berlin, and there were at least half a dozen protests throughout the city. Some people wonder: Do we need a Women’s Day anymore? Germany had a Kanzlerin for 16 years, and now we have an Außenministerin who is promising a “feminist foreign policy.”

The day has always been about women workers. And in Germany today, women workers earn 18 percent less than men. A large part of the gender pay gap is due to the fact that so-called “women’s work” is chronically underpaid. One of the rallies yesterday, at Rosa-Luxemburg-Platz, was therefore titled: “Think of CARE [work].”

Nurses at the rally have for years been fighting for better wages and safer staffing ratios. Two years into the pandemic, they are only now getting bonuses… a grand total €550! No wonder hospital workers have spoken out against the €100 billion rearmament program. This super-exploitation is justified by the retrograde idea that women simply enjoy caring for others, and therefore don’t need material compensation.

The same thing happens with childcare. On March 8, thousands of childcare workers across Germany went on strike to fight for higher wages. Of the 1.6 million people working in childcare, an estimated 1.4 million are women, and their wages are dismal. Unsurprisingly, both of these sectors, nursing and childcare, face extreme personell shortages.

That same day, workers at six Amazon warehouses across Germany went on strike. For almost a decade, workers at the online retailer have been fighting for a Tarifvertrag, a union contract. During the pandemic, Jeff Bezos has increased his wealth to almost €200 billion — yet he still refuses to share any of that with the people generating the profits.

The grocery delivery app Gorillas is copying Amazon’s tactics. As the Gorillas Workers Collective reports, the company is closing one of its warehouses at Berlin’s Alexanderplatz, which would conveniently mean firing three members of the recently-elected works council. These representatives are supposed to be protected from dismissal — but Gorillas is attempting to use a legal trick that Amazon already got away with.

So in Germany this year, March 8 was a strike day — as it should be. Precarious working conditions are one of the many forms of women’s oppression today. Another is Paragraph 218 of the criminal code, which to this day bans abortion — it is only decriminalized under certain circumstances. The new “coalition of progress,” as the SPD, Greens, and FDP have titled their government, is not offering serious reforms on either of these questions.

The reason is obvious: sexism means that women workers are paid less, while performing reproductive labor for free. That translates into higher profits for capitalists.

The only way to end sexism is to go back to the socialist roots of Women’s Day. As one speaker said yesterday: “Women’s Day is often presented like a combination of Valentine’s Day and Mothers’ Day. But it is a day of struggle against a capitalist and patriarchal system.”

On Women’s Day in 1917, women textile workers in the Russian capital went on strike. Their protests launched a revolution that brought down a dictator. That is the kind of energy we need to end sexism today.